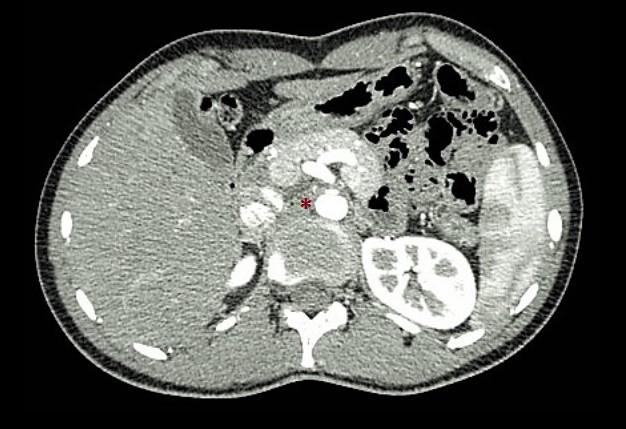 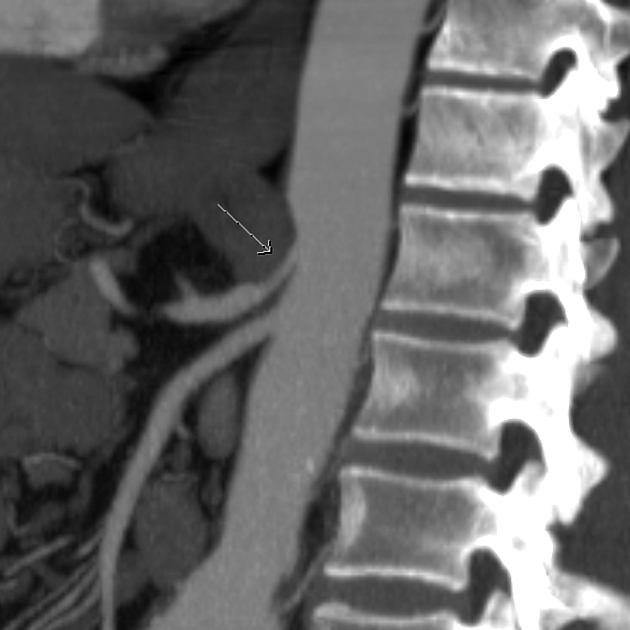 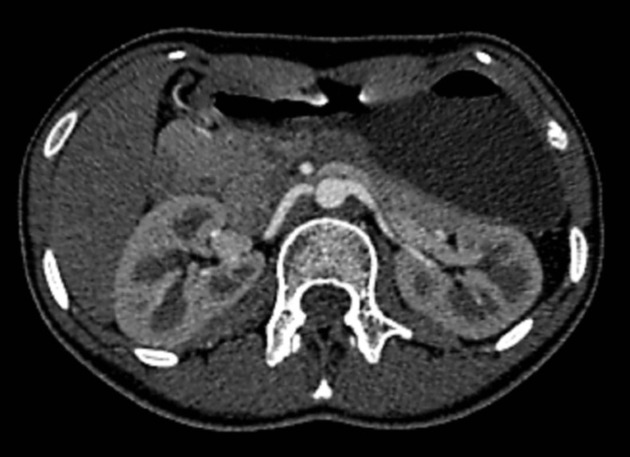 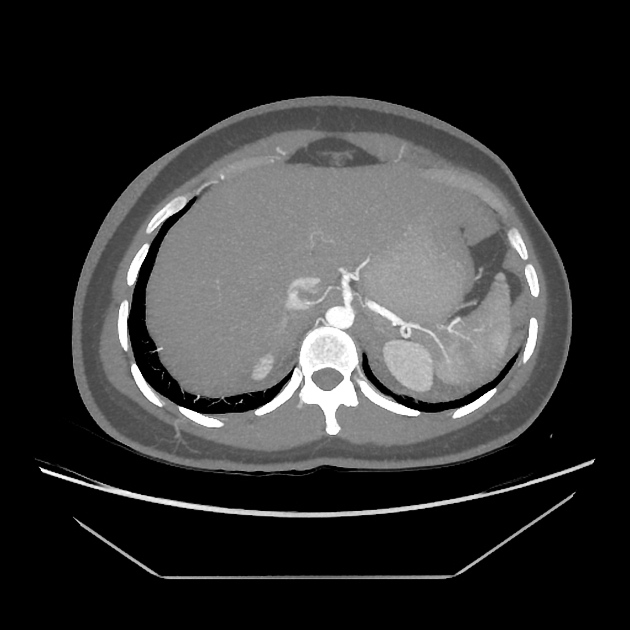 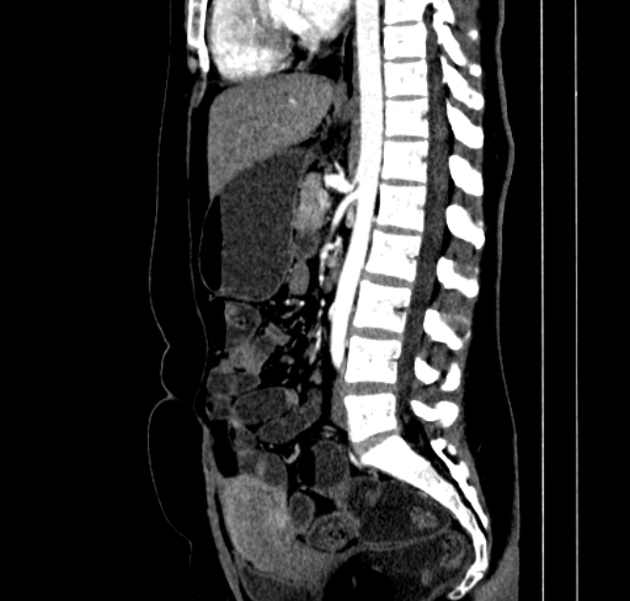 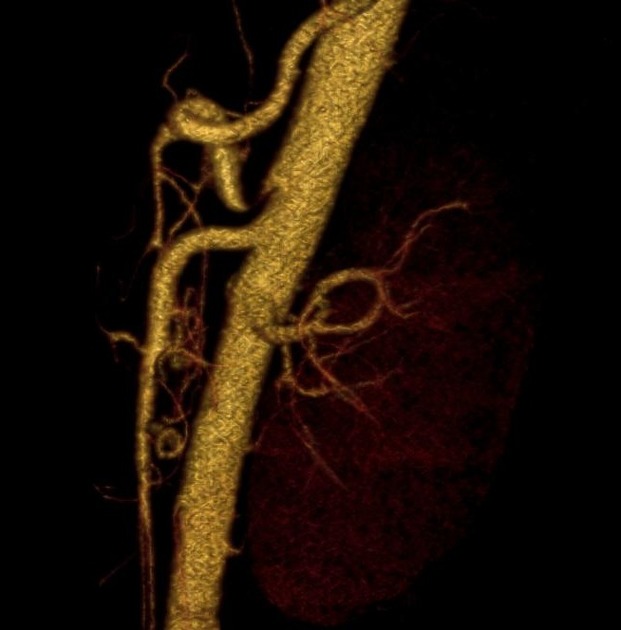 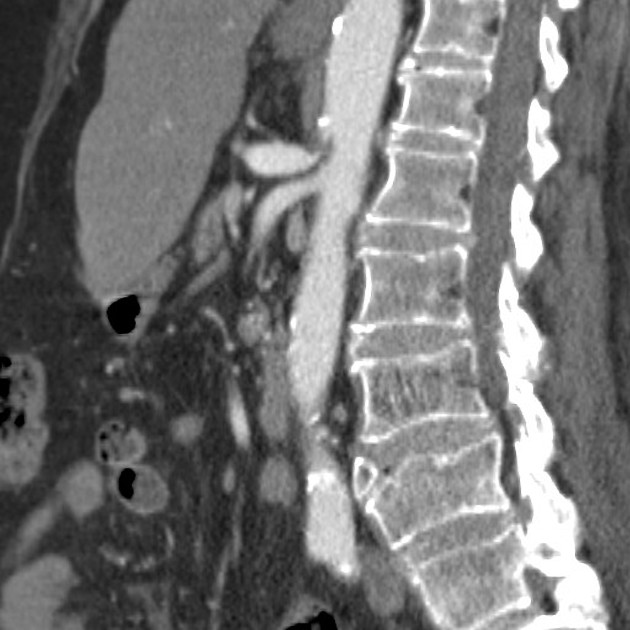 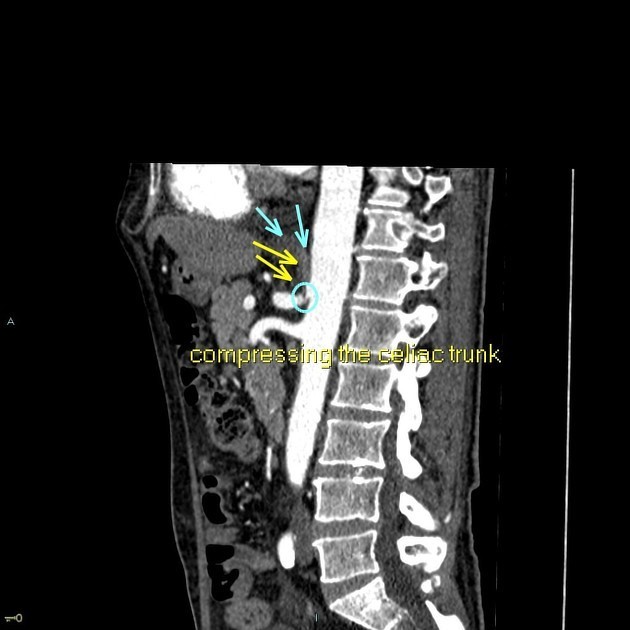 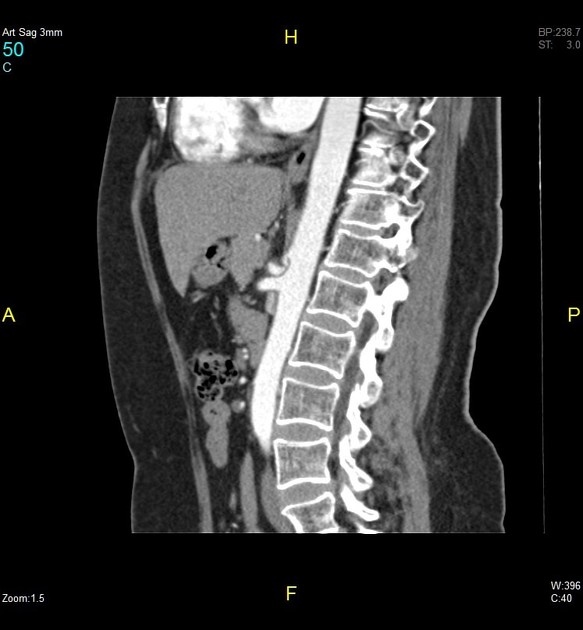 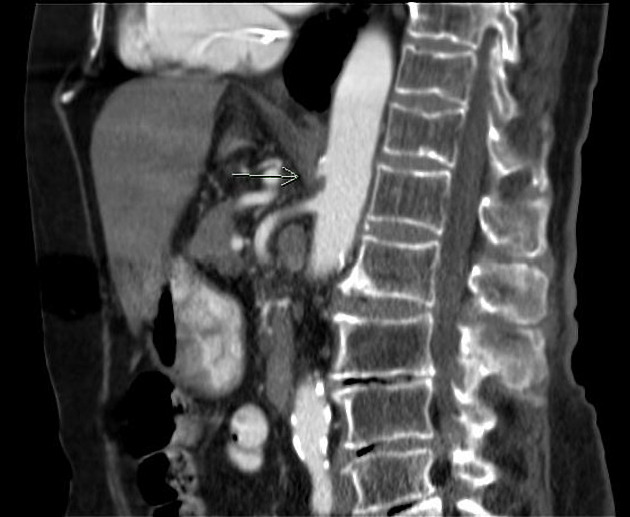 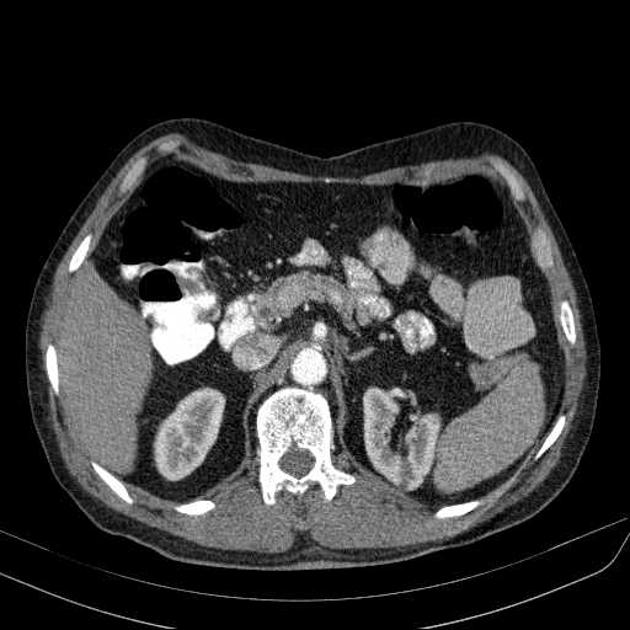 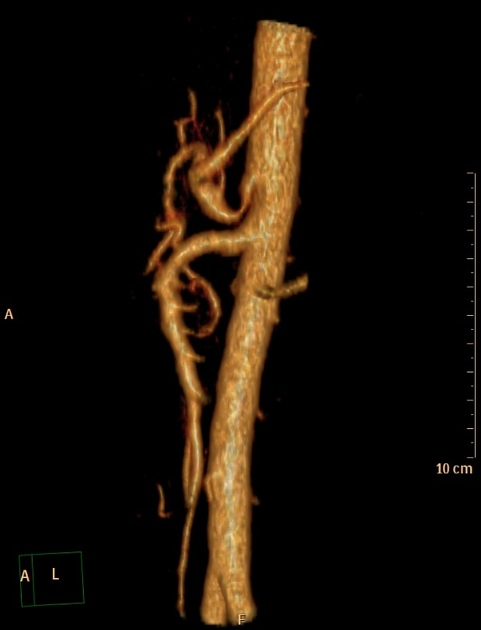 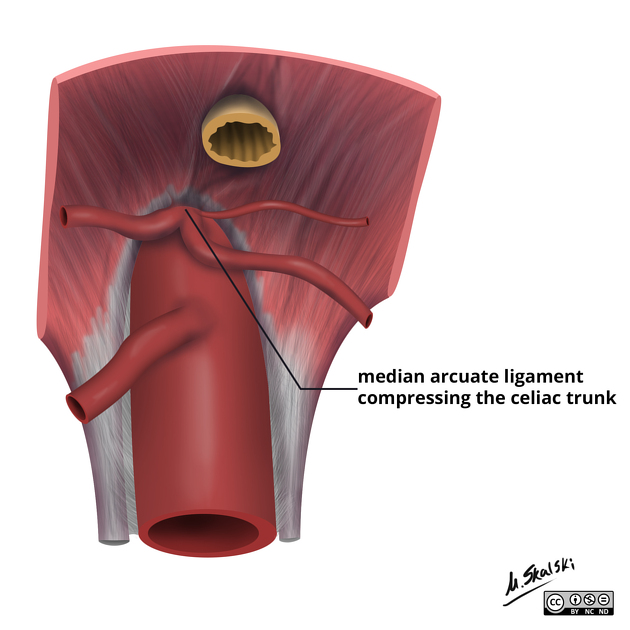 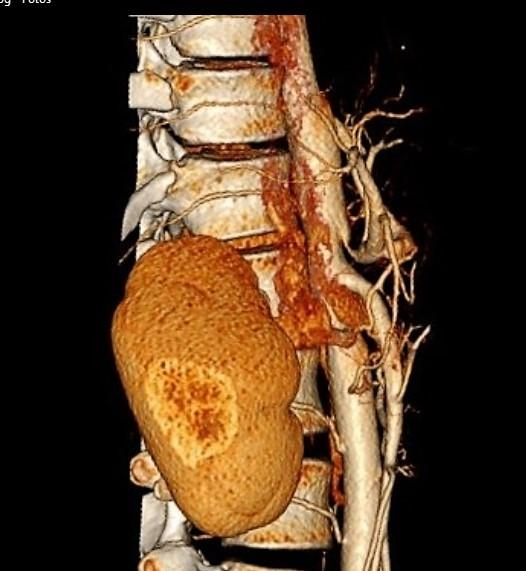 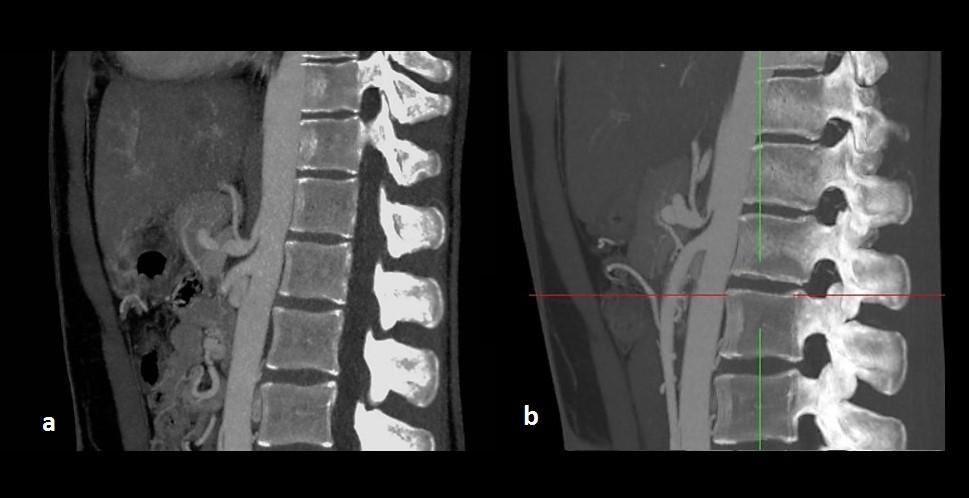 An unusual
cause of chronic abdominal pain: Median arcuate ligament syndrome. Midline sagittal reformatted MIP image in deep inspiration (a) and expiration (b), revealing the increase of the degree of the proximal coeliac artery stenosis (up to 75% in expiration).
www.eurorad.org • CC by-nc-sa-4.0 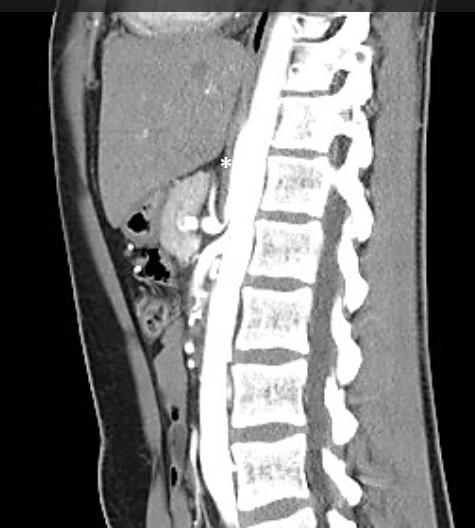 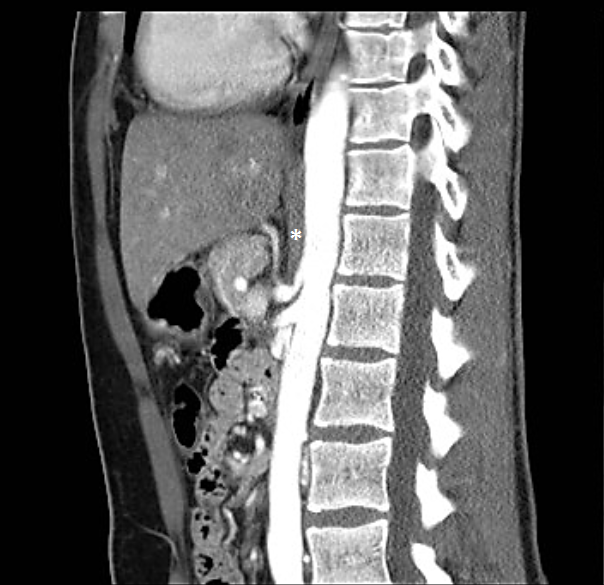 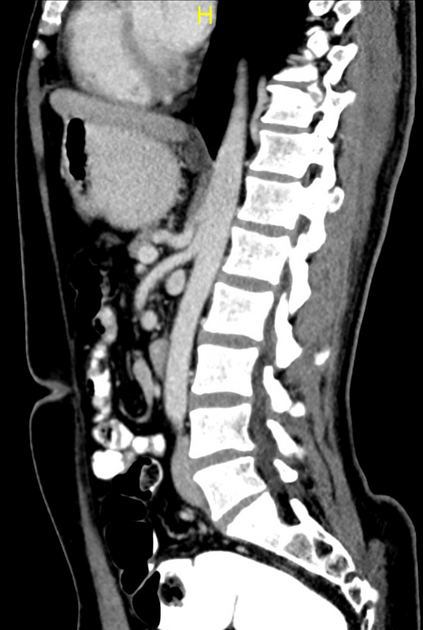 Celiac artery compression syndrome, also known as median arcuate ligament syndrome, Dunbar syndrome, or Harjola-Marable syndrome, is a rare condition characterized by upper abdominal pain in the setting of compression of the celiac trunk by the diaphragmatic crurae.

Although well-recognized as a clinical entity, there remains some controversy regarding this condition due to the relatively high prevalence of celiac artery narrowing in asymptomatic patients and autopsy studies .

There is considerable variation in positioning of both the celiac trunk and the diaphragm . In some, the ligament is positioned more inferiorly relative to the celiac artery, resulting in compression. The degree of compression typically varies with respiration, most accentuated during end-expiration when the two structures move closer together.

The etiology of abdominal pain is hypothesized to be ischemic, due to impaired flow secondary to compression. Alternatively, the contribution of a neuropathic component related to the effect on the celiac plexus has been proposed .

It is important to note that narrowing of the celiac trunk at the diaphragm is non-specific and most commonly seen in asymptomatic patients. As always, imaging findings should be correlated with the clinical history.

Doppler ultrasound can be a useful noninvasive diagnostic tool. In young adults, a peak systolic velocity over the compressed segment of the celiac artery of greater than 200 cm/s in the mid position between inspiration and expiration has a reported sensitivity and specificity of 75% and 89%, respectively, in detecting stenosis of 70% or greater .

CT angiography and conventional angiography are considered to be the gold standard imaging modalities for detection of the proximal celiac stenosis with classic hooking configuration.

Symptomatic patients are treated with surgical decompression. This is usually performed laparoscopically by dividing the median arcuate ligament.

The clinical entity was described in 1963 by P T Harjola, a Finnish surgeon who performed the first median arcuate ligament release . A larger case series of 15 patients was published in the American Journal of Roentgenology in 1965 by the radiologist J David Dunbar and surgeon Samuel Marable, both from Ohio, USA .