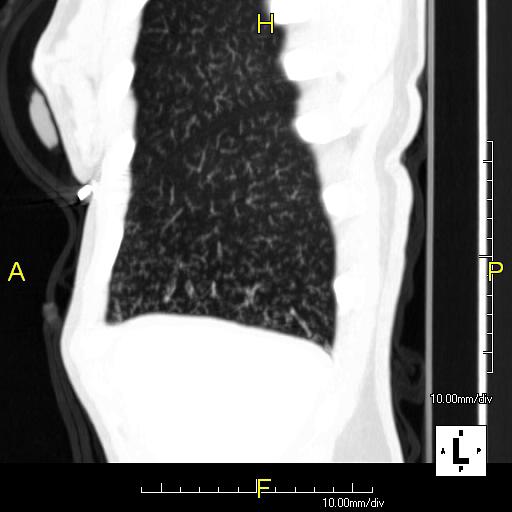 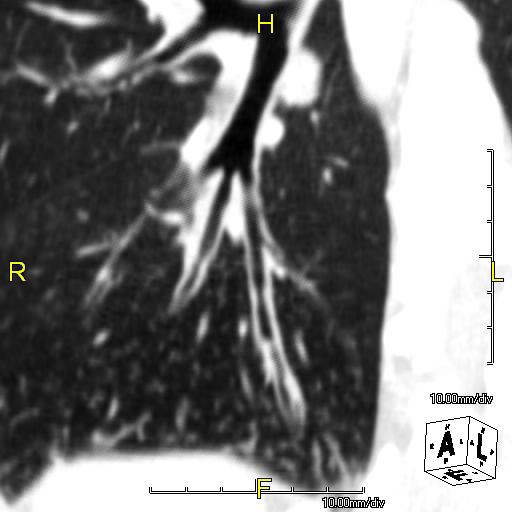 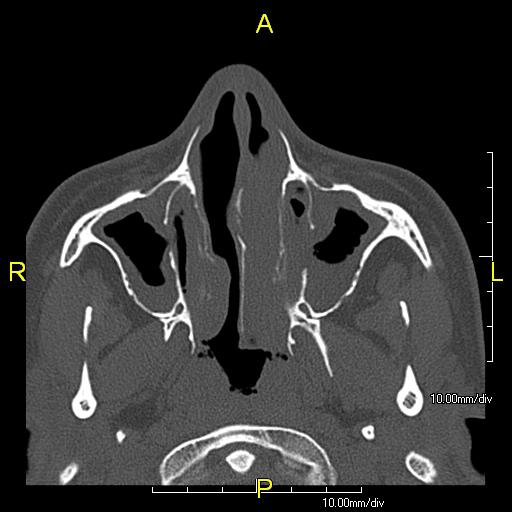 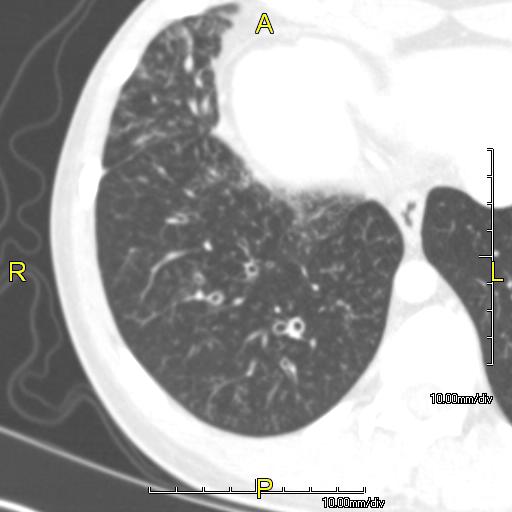 CT scan of
the lower chest in an individual with Primary Ciliary Dyskinesia showing mild bronchial will thickening and dilataion of the bronchus (bronchiectasis).
Wikipedia • Public domain 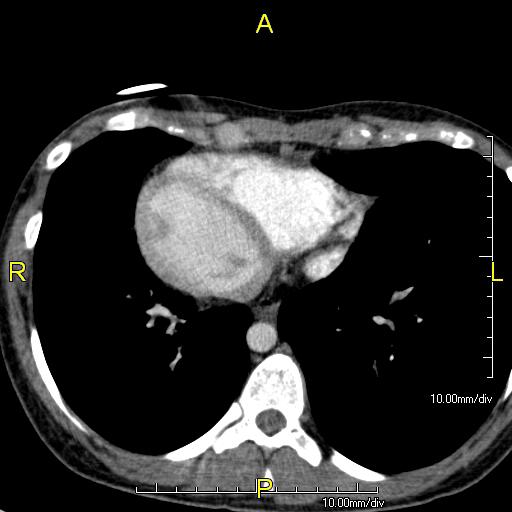 Primary ciliary dyskinesia, also known as immotile cilia syndrome, is the result of a congenital defect in the ultrastructure of cilia that renders them incapable of normal movement. It is associated with a number of anatomic and functional abnormalities.

Primary ciliary dyskinesia is caused by a heterogeneous group of genetic abnormalities which are inherited in an autosomal recessive pattern. The incidence variably estimated at 1:12,000-60,000 .

As cilia are found in a number of locations both during the embryological period and extra-uterine life it is not surprising that a number of systems are involved. Most apparent is the involvement of the respiratory tract cilia and sperm. The clinical picture includes:

Additionally, normal ciliary function is believed to be responsible for normal lateralization of the asymmetric chest and abdominal organs. In patients with primary ciliary dyskinesia, there is a random orientation, with 50% of patients demonstrating situs inversus .

Diagnosis is confirmed by:

Two other tests are sometimes employed:

A number of ciliary structural abnormalities are recognized, including :

Irrespective of the specific defect, the result is abnormal ciliary movement, which manifest in a variety of epithelial surfaces (respiratory epithelium including that covering the middle ear, paranasal sinuses and pharynx), sperm tail movement and fallopian tube mucosa. The term 'immotile' may be a misnomer as some movement may be present, although it lacks coordination and strength .

A number of both syndromic and non-syndromic associations are recognized.

Various combinations of the above clinical features have been described as syndromes :

In addition, there may be an association with a number of other conditions, including:

Chest radiographic abnormalities are dominated by bronchial wall thickening, bronchiectasis and hyperinflation. In some instances, cystic bronchiectasis with air-fluid levels may be visible .

The most striking pulmonary abnormality is that of bronchial wall thickening and bronchiectasis, present in most patients. The distribution is either central or diffuse and has a predilection for the lower and middle lobes .

Evidence of chronic sinusitis is prominent and may be seen as early as 6 months of age. The middle ears are chronically opacified, and polyps are seen in approximately 20% of cases.

The natural progression of primary ciliary dyskinesia is relatively slow compared to cystic fibrosis for example, but nonetheless, up to 25% of patients eventually develop respiratory failure .

As is the case with cystic fibrosis there appears to be higher than expected infection rate with P. aeruginosa .

Relate predominantly to bronchiectasis and diffuse lung disease, and include:

Consider other causes of bronchiectasis, including:

Cystic fibrosis and primary ciliary dyskinesia share a number of similarities including :

Fortunately, a number of differences usually enable a clinical distinction to be made relatively easily :