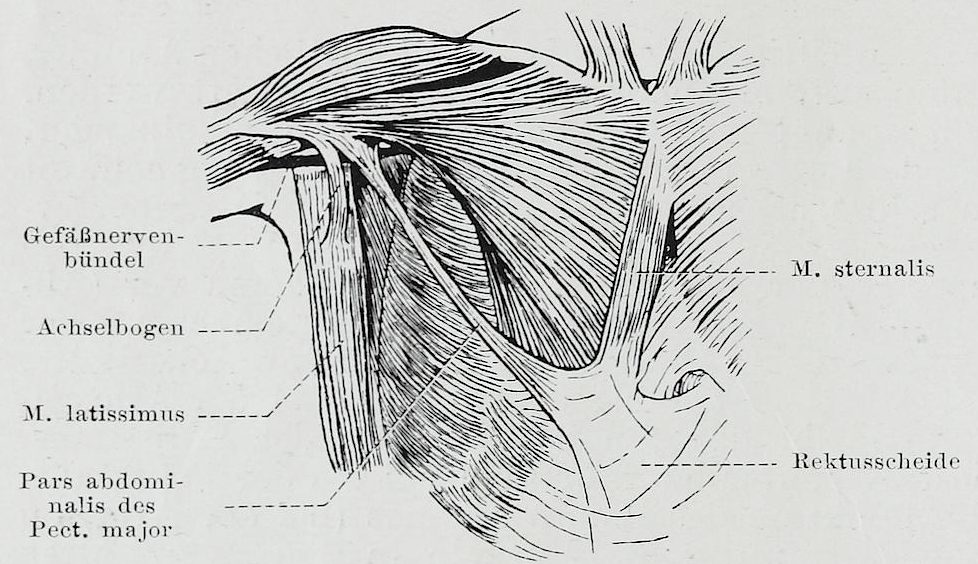 An anatomical
illustration from An atlas of anatomy/by regions 1962. The rectus sternalis muscle is highlighted.
Wikipedia • Public domain

The sternalis muscle is an uncommon anatomic variant of the chest wall musculature and is of uncertain etiology and function. Its importance lies in that it should not be mistaken for a pathological lesion.

Cadaveric studies have shown that the muscle is present in ~5% (range 1-8%) of both males and females and is twice as often unilateral as bilateral.

The sternalis muscle runs from the jugular notch of the manubrium superiorly, to approximately the caudal (inferior) aspect of the sternum. It is found adjacent to the medial edge of pectoralis major.

The mammographic appearance of the sternalis muscle is variable. Typically it is visible in the medial aspect of the breast on the craniocaudal mammogram and appears as a small soft tissue density/mass abutting the chest wall. Its margins and shape are variable (can range from flame shaped to an irregularly rounded density) . The muscle is usually not seen on the standard MLO or ML views. It typically measures 1-2 cm in maximum dimension.

As long as the radiologist is aware of the entity, there is usually little confusion. Ultrasound or CT or even MRI may be obtained for confirmation when the diagnosis is uncertain.

The sternalis muscle should be considered in the differential diagnosis if a posteromedial mass is noted on the CC view .

In occasional situations, a "cleavage/valley view" may help to confirm bilaterality.