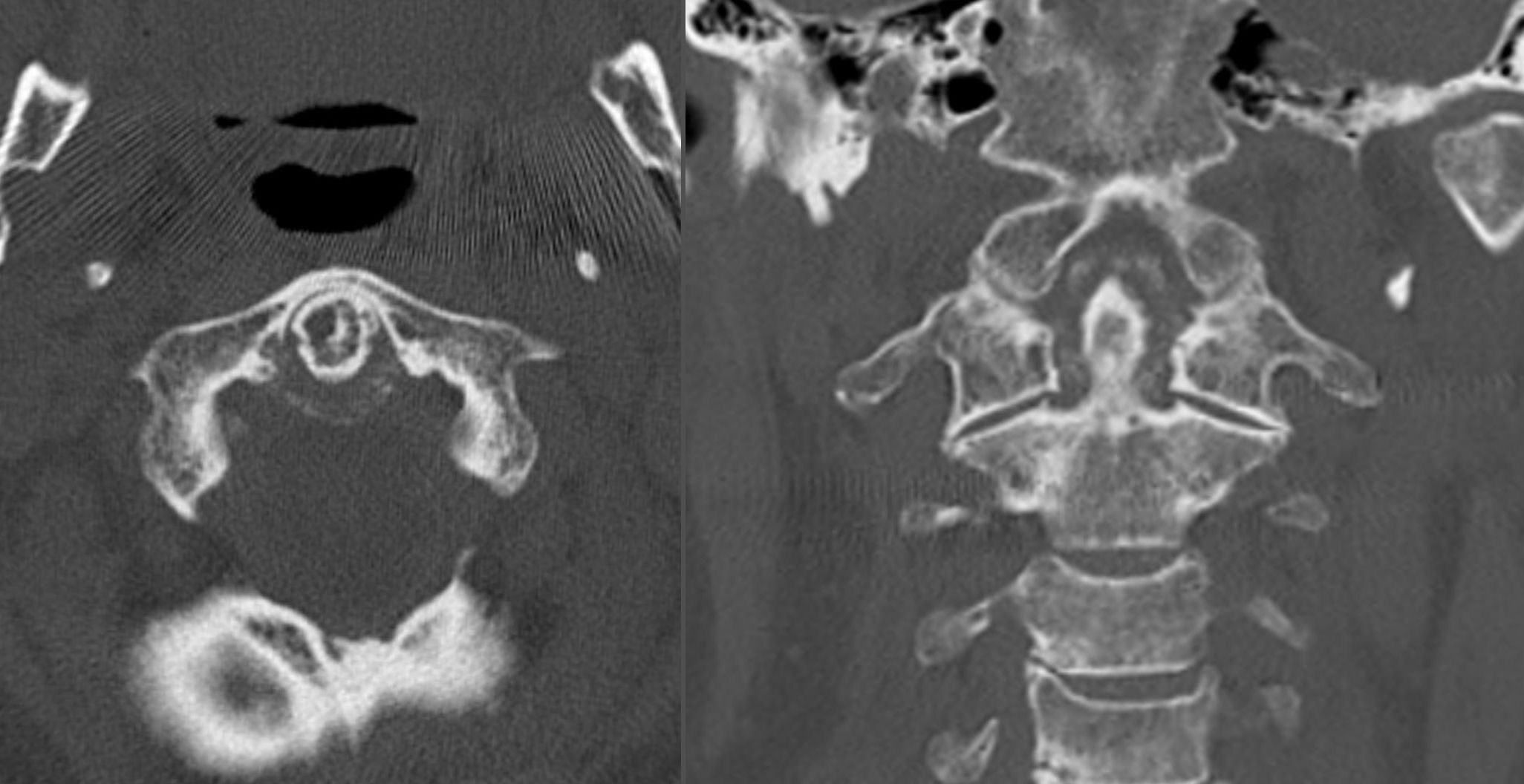 Crowned dens syndrome is an inflammatory condition resulting from crystal deposition in the cruciform and alar ligaments surrounding the dens, appearing as a radiopaque 'crown' surrounding the top of the dens. It typically presents with pain and increased inflammatory markers.

The crowned dens syndrome is an acute presentation due to crystal deposition in the periodontoid soft tissues, and should not be used for chronic retroodontoid pseudotumor (also caused by CPPD). As such the term should not be used unless inflammatory symptoms and pain are present .

Although the pathology is very similar, crowned dens syndrome should not be confused with calcific tendinitis of the longus colli muscles (also due to HADD).

It typically presents with the combination of localized pain at the base of skull/back of the neck, resulting in neck stiffness, and systemic evidence of inflammation such as fever and raised inflammatory markers (e.g. ESR, CRP, WCC) . The clinical differential diagnosis includes polymyalgia rheumatica, giant cell arteritis, meningitis or another cause of inflammatory spondylitis (e.g. rheumatoid arthritis) .

The key radiographic finding is the presence of periodontal calcification appearing above and to the sides of the top of the dens in a crown or halo configuration .

CT is the gold standard for identifying the calcification and confirming that it corresponds to the periodontal ligaments, particularly the transverse ligament of the atlas (part of the cruciform ligament) . Calcification can also, however, occur in any of the periodontal ligaments including the vertical band of the cruciform ligament, alar ligament, and apical ligament .

There is usually soft tissue thickening which is nonenhancing .

MRI is not sensitive to the calcification but is superior in demonstrating inflammatory change and potential compression of the cord.

Crowned dens syndrome usually requires only medical management with anti-inflammatory agents. It usually spontaneously resolves although duration is variable (from days to months) . In some cases, the inflammatory pannus can result in cervical cord compression, and this may require surgical decompression .

The condition, and term "crowned dens syndrome" were first described in 1985 by Bouvet et al.