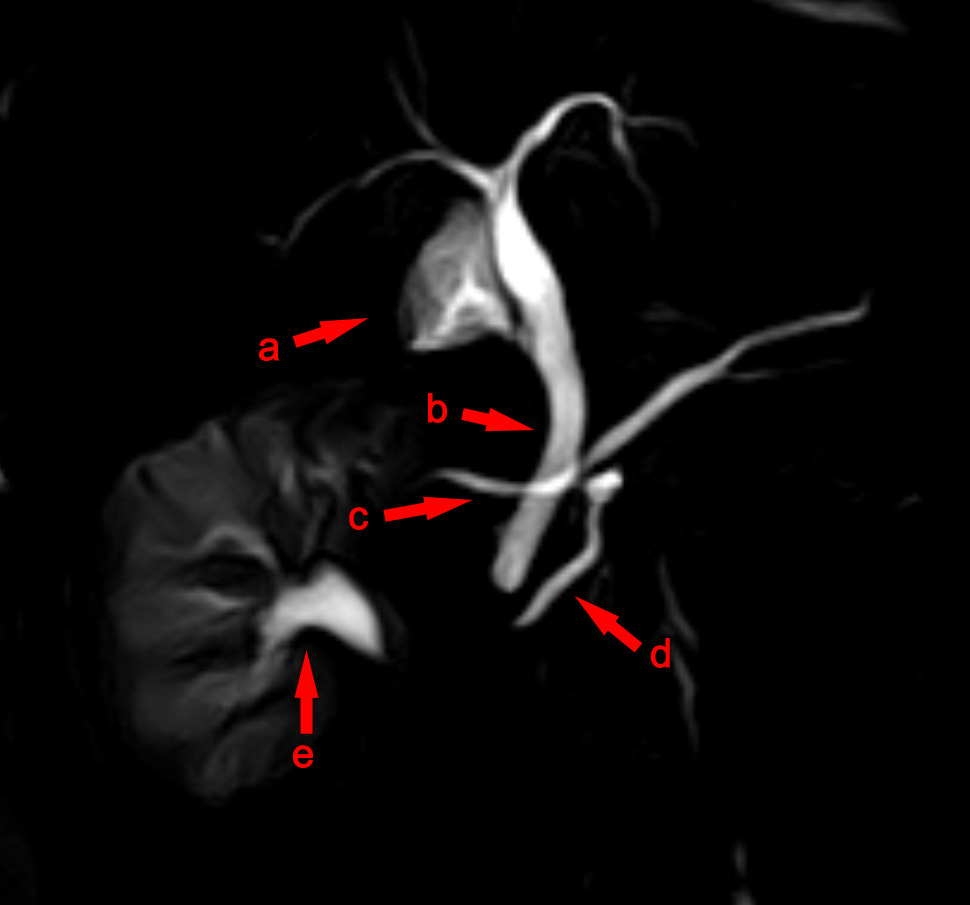 This image
is part of a series which can be scrolled interactively with the mousewheel or mouse dragging. This is done by using Template:Imagestack. The series is found in the category IPMN Case 001. Intraduktale papilläre muzinöse Neoplasie des Pankreas; Seitengangtyp. Gleichzeitig besteht ein Pankreas divisum. MRCP in gedrehter MIP.
Wikipedia • CC BY-SA 3.0
Hallo!
Radiopaedia • CC-by-nc-sa 3.0 • de

Pancreas divisum represents a variation in pancreatic ductal anatomy that can be associated with abdominal pain and idiopathic pancreatitis. It is characterized, in the majority of cases, by the dorsal pancreatic duct (main pancreatic and Santorini ducts) directly entering the minor papilla with no communication with the ventral duct (Wirsung), and thus, the major papilla.

The term dominant dorsal duct syndrome is sometimes used in the literature to reflect that the main pancreatic duct draining via the minor papilla does not always have the classical pancreas divisum anatomy .

The classic description of pancreas divisum refers to the complete form but incomplete and reverse forms have also been described (see figures 2 to 4).

It is the most common variation of pancreatic duct formation and may be present in ~4-10 % of the general population . Its MRCP prevalence is at around 9% with autopsy prevalence going up to 14%.

It results from failure of fusion of dorsal and ventral pancreatic anlages. As a result, the dorsal pancreatic duct drains most of the pancreatic glandular parenchyma via the minor papilla. Although controversial, this variant is considered a cause of pancreatitis.

Pancreatic divisum can result in a santorinicoele, which is a cystic dilatation of the distal dorsal duct (Santorini duct), immediately proximal to the minor papilla.

A reverse pancreas divisum has been described where the main duct fuses with the ventral duct and a small residue dorsal duct does not communicate with the main duct and drains separately into the minor papilla .

This was the traditional method of diagnosis where a pancreas divisum was suspected when there was no contrast extending towards the pancreatic tail upon administration at the ampulla of Vater.

It is the current gold standard method of evaluation. The key imaging features:

A diagnosis of pancreas divisum does not routinely warrant treatment, especially when incidental and asymptomatic.  In symptomatic patients (e.g. recurrent pancreatitis), management options may include :