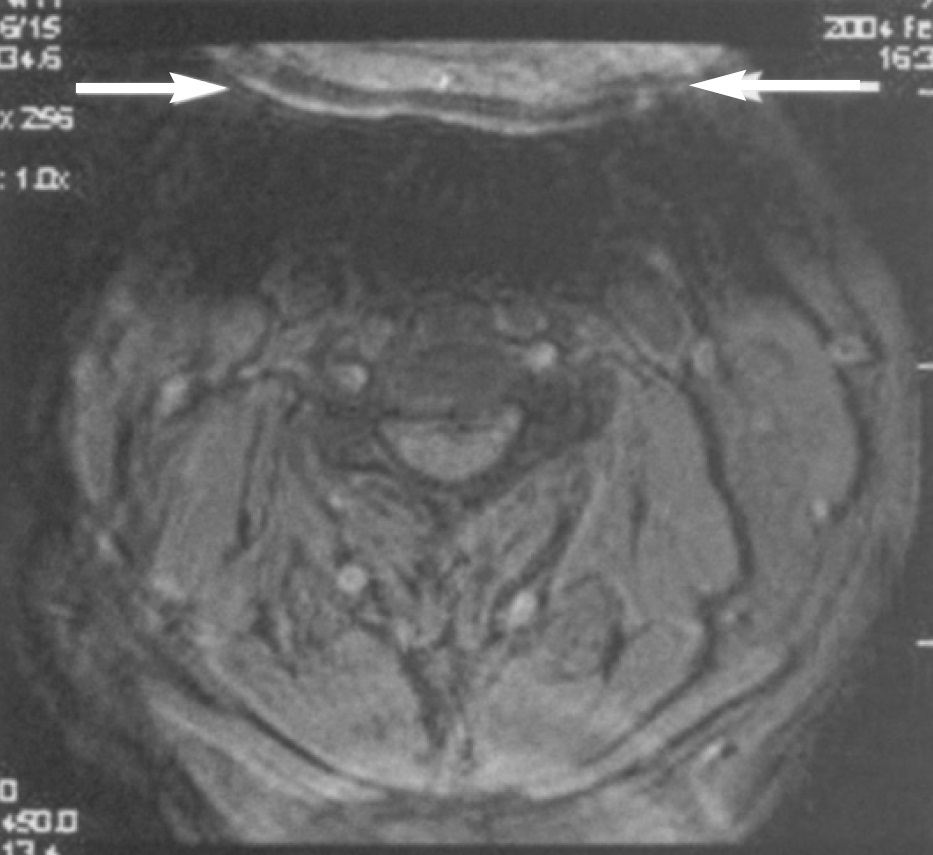 MRI with wrap
around artifacts. For context, see: MRI artifact
Wikipedia • CC BY 4.0

Aliasing in MRI, also known as wrap-around, is a frequently encountered MRI artifact that occurs when the field of view (FOV) is smaller than the body part being imaged. The part of the body that lies beyond the edge of the FOV is projected onto the other side of the image.

This can be corrected, if necessary, by oversampling the data. In the frequency direction, this is accomplished by sampling the signal twice as fast. In the phase direction, the number of phase-encoding steps must be increased with a longer study as a result. However, if the FOV and matrix size (phase-encoding steps) are increased and simultaneously number of excitations (or number of signal averages) reduced to half, the imaging time can be kept constant with correction of aliasing.

Case 1 demonstrates axial T2-weighted images of the brain that demonstrates aliasing. The first image shows wrap-around with the back of the head projected over the front because the phase-encoded direction is anterior-posterior and the FOV is too small. The second image has the phase and frequency directions reversed resulting in absence of the aliasing artifact. Oversampling was used in the frequency direction to eliminate the aliasing.

The basis of aliasing lies in "analog-to-digital conversion" wherein the continuous MR signal picked by the receiver coil is converted into its digital counterpart for presentation as a grey-scale image. This ubiquitously involves sampling of the continuous signal at pre-defined intervals. For greater fidelity in signal conversion, the sampling rate should be at least twice the highest frequency within the signal (Nyquist rate). At lower sampling rates, high-frequency signals become indistinguishable from lower frequency signals, i.e., they become aliases.

In MRI, spatial localization within a single image depends on the frequency signature of the MR signal originating from that portion. Within a given bandwidth, higher frequency signals come from the periphery of the image and are aliased over the lower frequency (relatively) central portion of the image. Aliasing in MRI can occur in both phase and frequency axis.

Aliasing in MRI can be compensated for by: