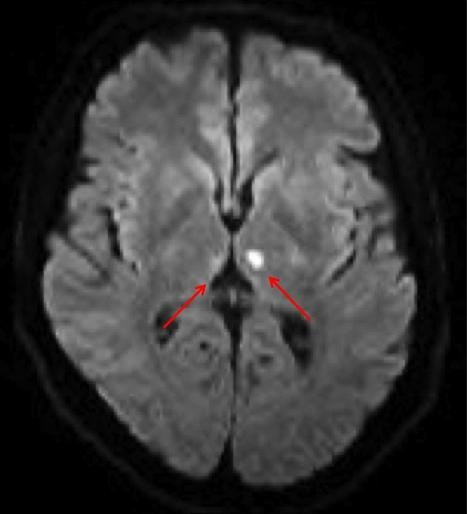 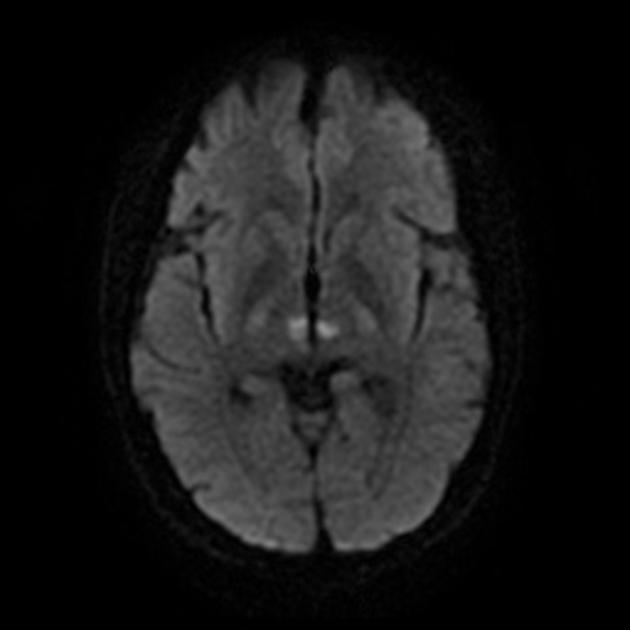 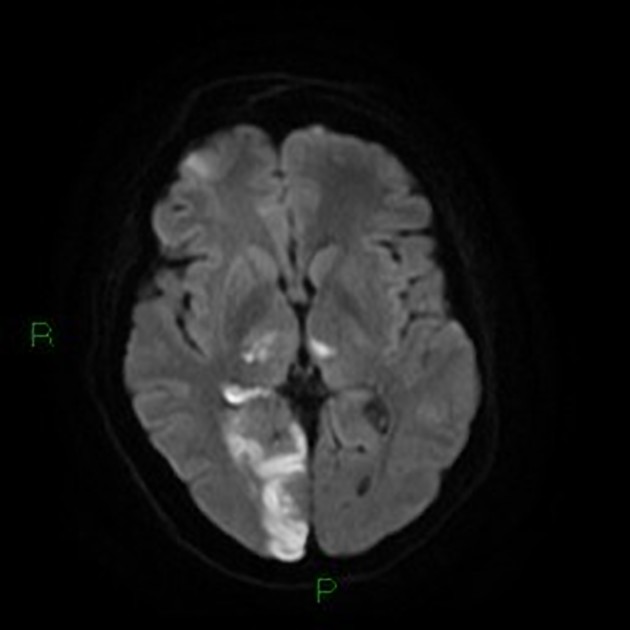 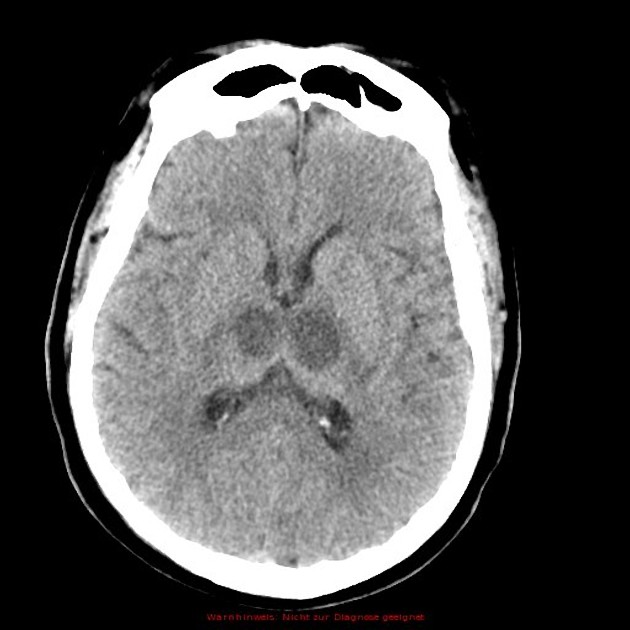 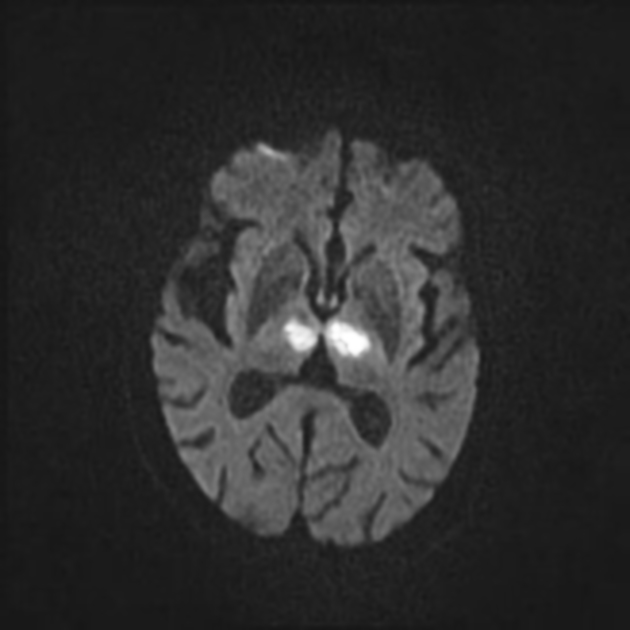 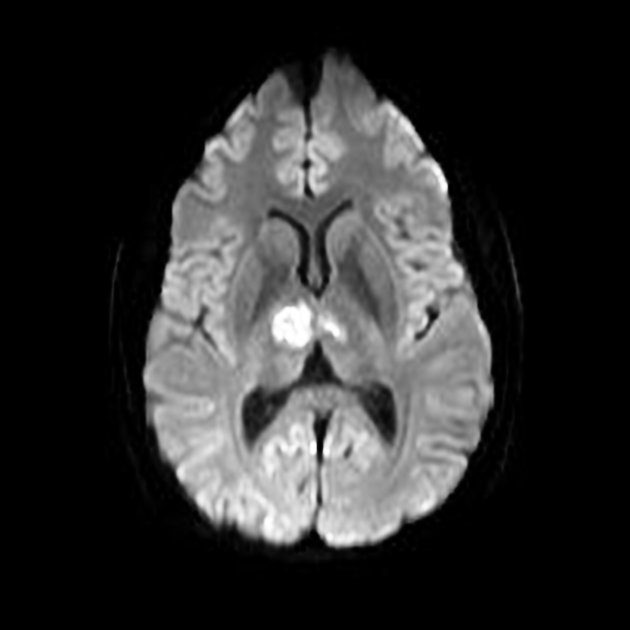 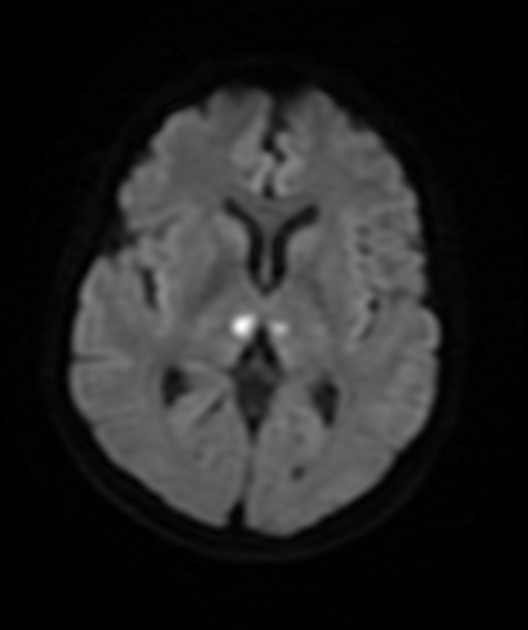 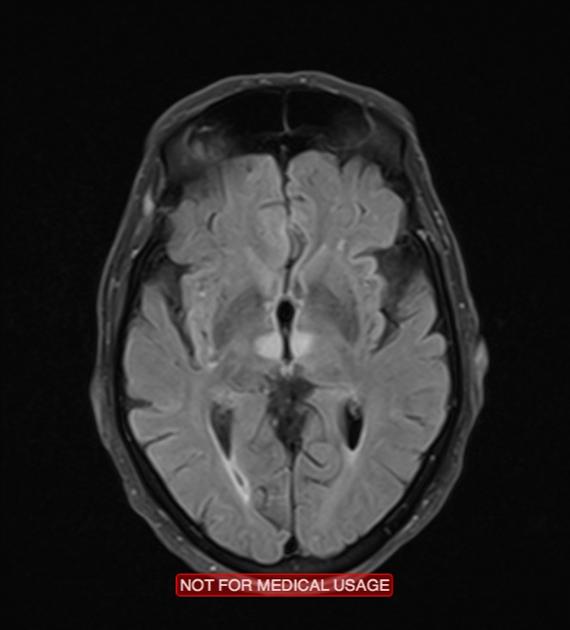 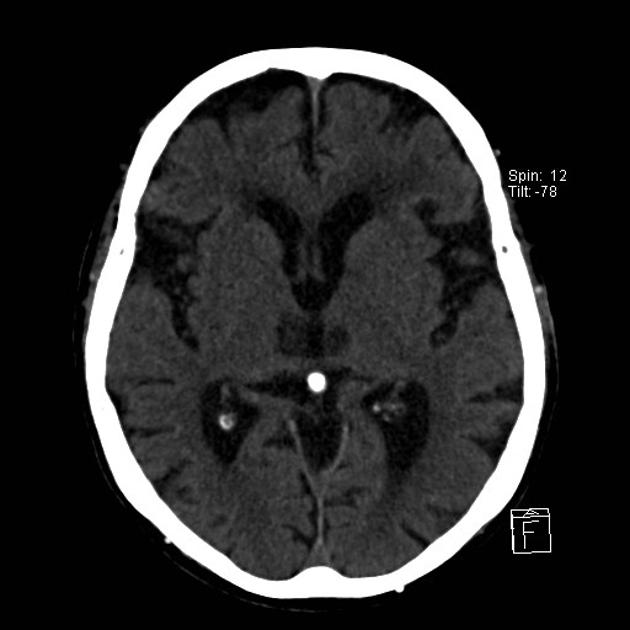 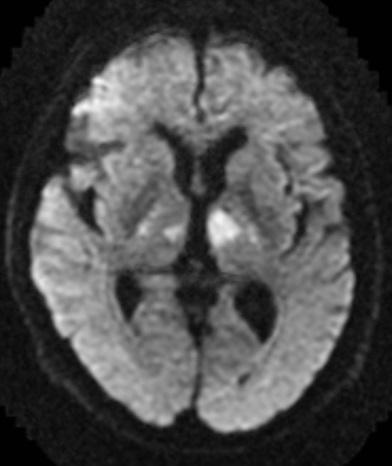 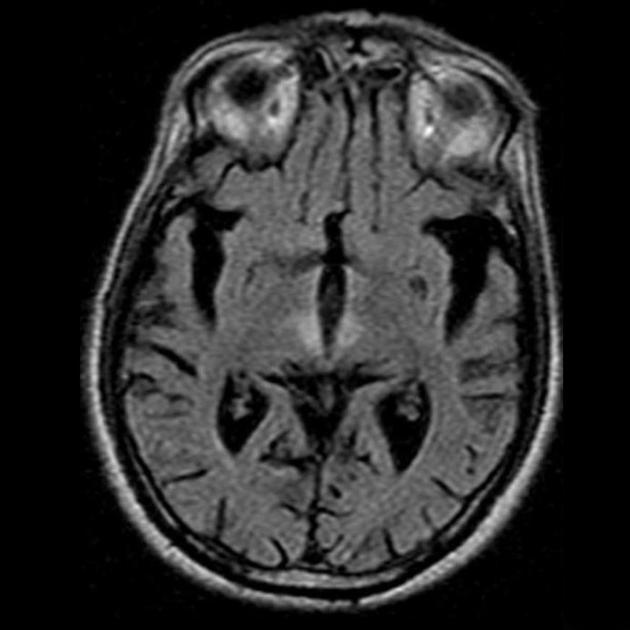 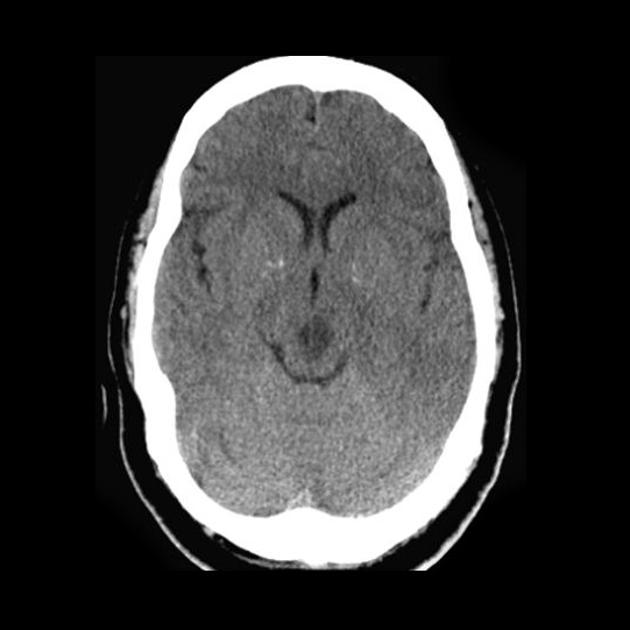 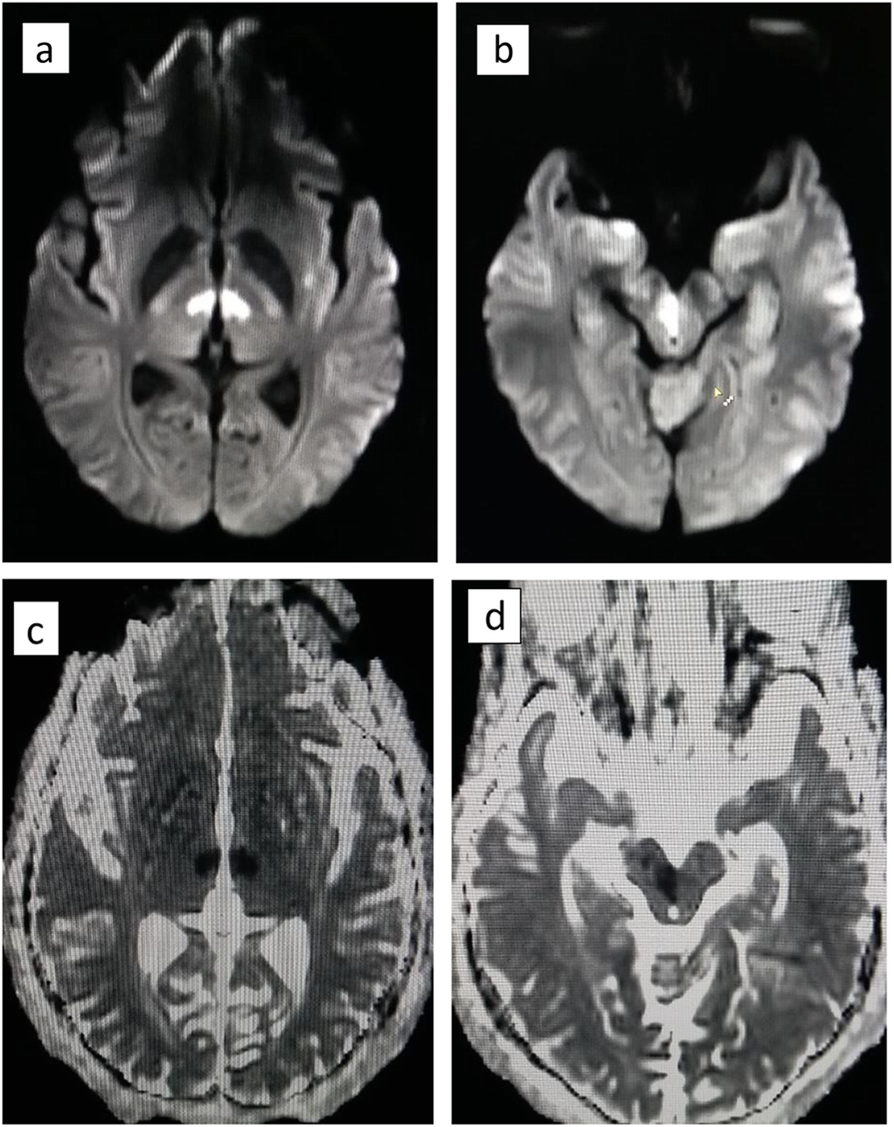 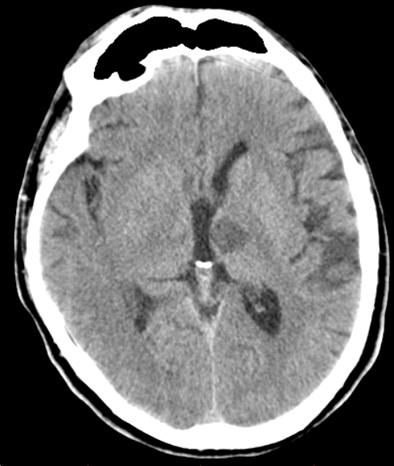 Bitalamic
infarction related to occlusion of Percheron artery in patient with patent foramen-ovale. Axial CT shows a well-defined hypodense lesion in the left thalamus and a smaller subtle area of hypodensity in the right thalamus. These findings are consistent with a subacute evolution of stroke.
www.eurorad.org • CC by-nc-sa-4.0 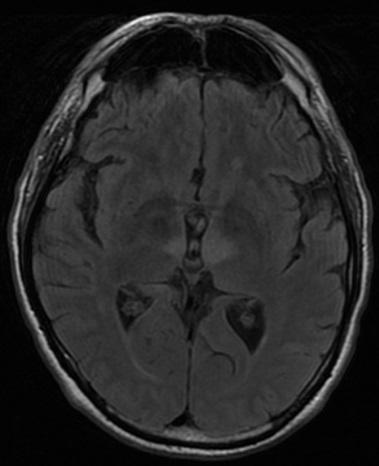 Bitalamic
infarction related to occlusion of Percheron artery in patient with patent foramen-ovale. Axial T2 FLAIR: two areas of hyperintensity in the thalamic regions due to the beginning of vasogenic oedema.
www.eurorad.org • CC by-nc-sa-4.0 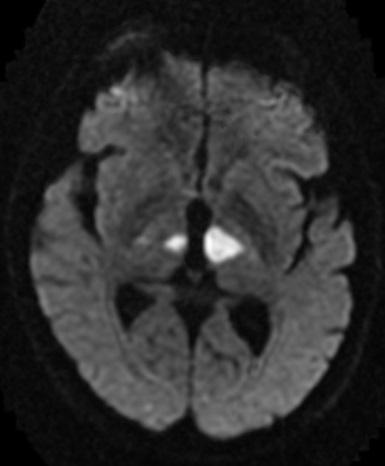 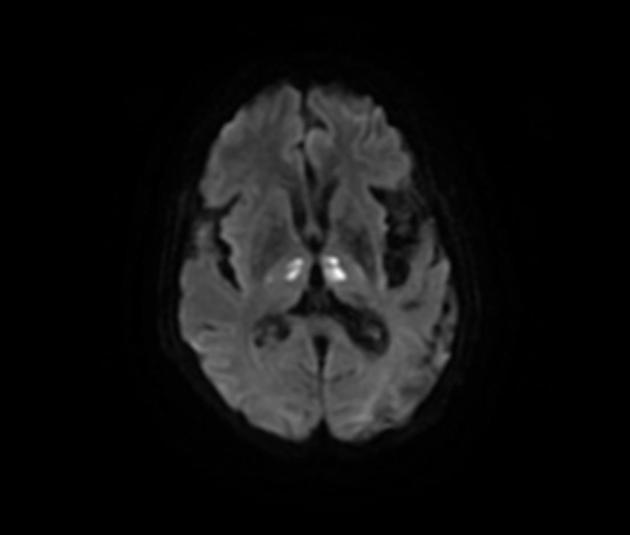 Artery of Percheron territory infarct is rare, on account of the relative rarity of the artery of Percheron, and presents with a variety of signs and symptoms collectively termed the paramedian thalamic syndrome. It is a type of posterior circulation infarction.

On imaging, it is classically characterized by bilateral infarcts in areas involving the rostral midbrain and/or ventromedial thalamus.

The symptoms may vary following infarct extension through thalamic or mesencephalic structures :

There are four major patterns of artery of Percheron infarction, all of which bilaterally involve the paramedial thalamus :

Artery of Percheron infarction is best visualized on DWI or FLAIR sequences on MRI and is often missed on initial CT.  The midbrain V sign is a feature demonstrated on 67% of patients with the artery of Percheron infarctions involving the midbrain. This sign appears on axial views of DWI and FLAIR sequences as an area of V-shaped hyperintensity on the pial surface of the midbrain that forms the posterior wall of the interpeduncular fossa .

Described by the French neurologist Gérard Percheron in 1973.