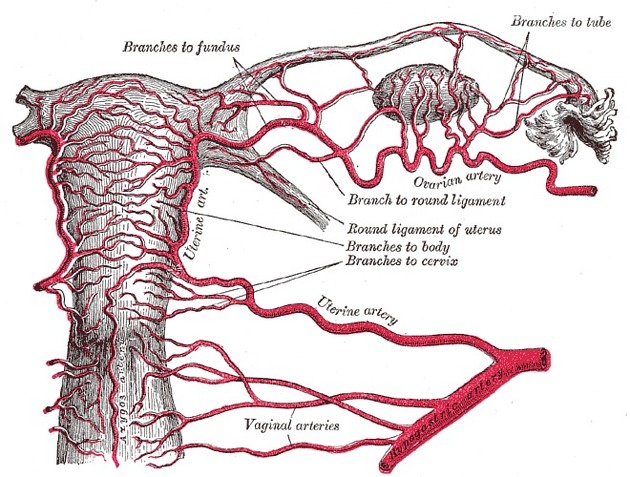 The cervix or uterine cervix is the lower constricted segment of the uterus providing the passage between the uterus proper and the vagina.

The cervix is somewhat conical in shape, with its truncated apex directed posteriorly and inferiorly. The inferior aspect of the cervix protrudes into the vaginal vault which surrounds it.

The canal of the cervix (endocervical canal) is somewhat fusiform, flattened from anterior to posterior and broader in the middle than at either extremity. It communicates through its internal orifice (internal os) with the cavity of the body of the uterus, and through the external orifice (external os) with the vaginal cavity. The wall of the canal presents an anterior and a posterior longitudinal ridge, from each of which arise a number of small oblique columns, the palmate folds, giving the appearance of branches from the stem of a tree. The folds on the two walls are not exactly opposed but fit between one another so as to close the cervical canal.

The cervix projects through the anterior wall of the vagina, which divides it into an upper, supravaginal portion, and a lower, vaginal portion.

In the cervix, the mucous membrane is sharply differentiated from that of the uterine cavity. It is thrown into numerous oblique ridges, which diverge from an anterior and posterior longitudinal raphe. In the upper two-thirds of the canal, the mucous membrane is provided with numerous deep glandular follicles, which secrete a clear viscid alkaline mucus. In addition, extending through the whole length of the canal is a variable number of tiny cysts, presumably follicles which have become occluded and distended with retained secretion known as nabothian cysts.