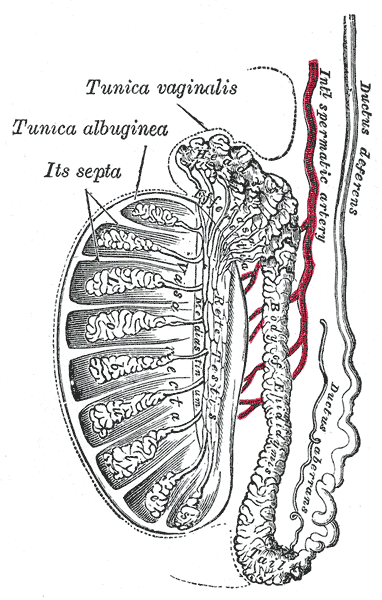 The ductus deferens is a paired 30-45 cm muscular small caliber tube that connects the epididymis to the ejaculatory duct .

The ductus deferens is the continuation of the tail of the epididymis. It ascends along the medial side of epididymis posterior to the testis and runs in the posterior part of the spermatic cord through the scrotum, inguinal canal and into the abdominal cavity through the deep inguinal ring, where it is extra-peritoneal.

It curves medially and forwards, crosses above the ureter and approaches its opposite fellow. The two ducts now turn downwards side by side and each dilates in a fusiform manner to form the ampulla, the storehouse of sperm. The ampulla lies parallel and medial to the seminal vesicles at their lower ends and fuses with the duct of the seminal vesicle to form the ejaculatory duct. Each ejaculatory duct passes through the prostate to open on the side of the urethral crest.