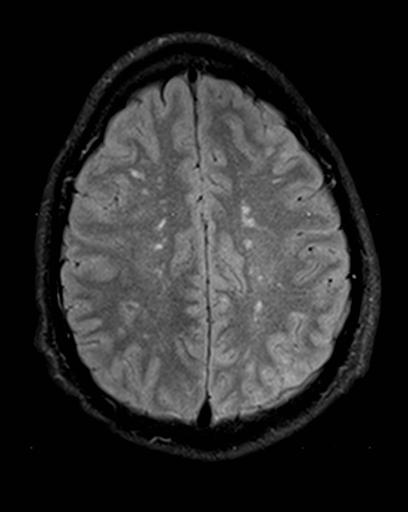 It occurs in ~2.5% (range 0.5-4%) of those with fat embolism, a phenomenon that subclinically occurs in a vast majority of patients (>90%) with bone fractures and during orthopedic prosthetic procedures.

Symptoms usually develop 1-2 days after the event. Although fat emboli can virtually reach any organ in the body, the results of the embolic shower are most often evident in the lungs, brain, and skin.

Pulmonary dysfunction is present in 75% of patients and is the earliest to be manifested . The presence of numerous fat globules in the small pulmonary vessels results in dyspnea and further hypoxemia.

Neurological symptoms are seen in 86% of patients : ranging from acute confusion to drowsiness, rigidity, convulsions, or coma.

The skin manifestation is characterized by a petechial rash in the chest, axilla, conjunctiva, and neck that appears within 24–36 hours and disappears within a week .

Gurd's and Wilson's criteria require the presence of at least one major and at least four minor criteria:

Fat particles, from bone marrow after lower extremity fracture, or from vessels and heart after cardiac surgery, are released in blood circulation then embolize to and occlude the pulmonary capillaries. Some of the fat globules can pass through the pulmonary capillaries and reach intracranial capillaries. Pathophysiology is thought to be most likely due to both mechanical obstruction as well as a secondary inflammatory response to the released free fatty acids from trapped fat particles within the small vessels. Consumptive thrombocytopenia and anemia are common complications of fat embolism.

May show foci of vasogenic edema in a random (i.e. embolic) distribution. A "starfield" pattern may be seen on DWI.

The fat embolism syndrome was first described as a clinical entity by E Von Bergmann in 1873 . It is thought to have been clinically described as a post-mortem finding by Zenker in 1862.