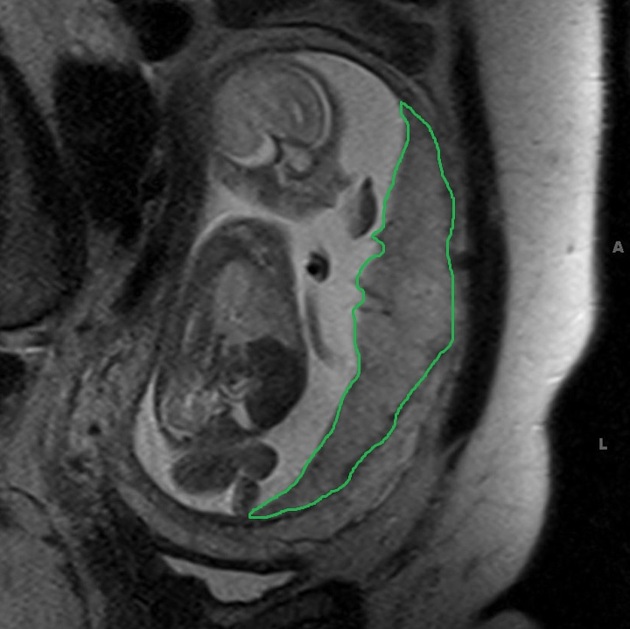 Placental evaluation with MRI is a problem-solving technique that can be used if ultrasound evaluation is insufficient or confusing. Even if the placenta is not the main point of evaluation, it is useful to understand the appearance of the placenta on obstetric imaging for other causes.

Placental evaluation with MRI is not generally performed in the first trimester due to a theoretical risk of MRI to the embryo.

Additional planes may be useful for evaluation, as needed.

An axial T1 fat-suppressed may be added to evaluate for blood products. Diffusion-weighted sequences have also been used by some to evaluate the placental-myometrial interface.

Intravenous gadolinium contrast is not generally used out of potential risk to the fetus.

The placenta is a 2-4 cm thick pancake-shaped structure attached to either the anterior or posterior uterine cavity.

An abnormal appearance of the placental implantation relies on disruption of the normal T2 trilayered appearance of gravid myometrium (central hyperintense vascular layer between two hypointense layers) . Abnormal placentation is not reliably assessed prior to 24 weeks gestational age.

Placental MRI can be very useful in confirming and characterizing of disorders of abnormal placental villous adherence:

Other situations in which it may be useful