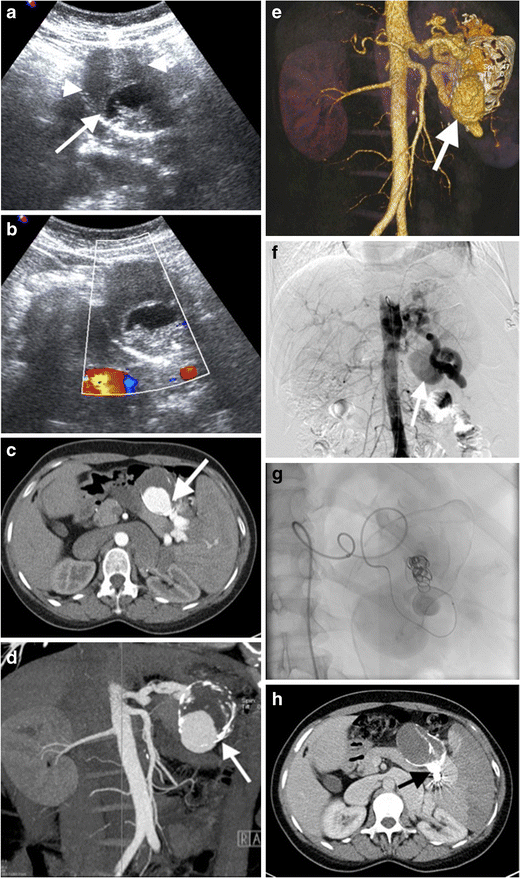 Splenic artery aneurysms are the commonest visceral arterial aneurysm formation as well as the 3 commonest abdominal aneurysm (after the aorta and iliac vessels). Aneurysms are usually saccular in configuration and they can either be in the form of a true aneurysm (much more common) or as a pseudoaneurysm.

The so-called “double rupture” phenomenon occurs when initial spontaneous stabilization followed by subsequent sudden circulatory collapse is experienced. This is caused by initial bleeding collecting into the lesser sac then followed by flooding into the peritoneal cavity .

Size of splenic artery aneurysms can range from 2 to 9 cm, but usually it is smaller than 3 cm. Those may be single or multiple and are most commonly involving the distal portion of the artery. Peripheral calcification is common, and mural thrombus may be present .

Ultrasound with Doppler is non ionizing modality and relatively cheap and available yet it is operator dependent, has limited spatial resolution and may be difficult in cases of obesity, bowel shadowing and atherosclerosis.

MR angiography is of higher spatial resolution than US but it is relatively expensive and contraindicated in some patients (claustrophobia, aneurysm clips, cardiac pacemakers).

CT angiography is a quick and efficient examination, has higher resolution than MR and its MPR capabilities greatly help in diagnosis, yet it has its contraindications (renal failure, allergy to contrast).

Direct catheter angiography is the gold standard imaging test, has the highest resolution and concomitant management can be applied, yet it still carries the complications of arterial puncture .

The overall risk of rupture is thought to be ~6%. However in an event of rupture there is a relatively high mortality rate of ~36% .

Rapidly increasing size, presence in a premenopausal woman, cirrhosis, and symptomatic aneurysm may warrant intervention, regardless of size.