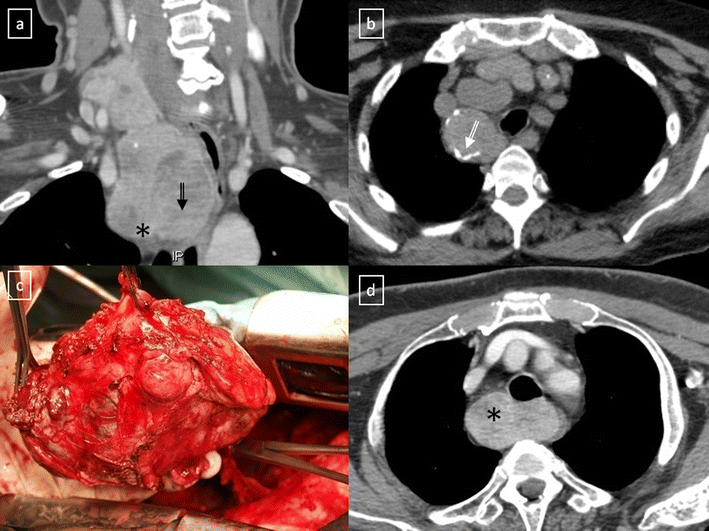 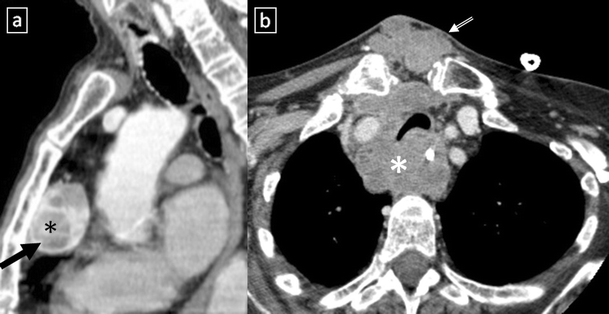 A diagnostic
approach to the mediastinal masses. a Heterotopic mediastinal goitre. Sagittal contrast-enhanced CT scan demonstrates a well-defined mass (arrow) located in the retrosternal space which shows an intense and heterogeneous contrast enhancement due to the presence of cystic areas (*). No connection to the thyroid gland from the neck. b Anaplastic thyroid carcinoma in a 64-year-old woman with respiratory failure. Contrast-enhanced CT scan shows an anterior mediastinal soft tissue mass (*) which surrounds great vessels and oesophagus and compresses trachea. Note the extension to the suprasternal fossa (open arrow)
insightsimaging.springeropen.com • CC-by-2.0
Hallo!
Radiopaedia • CC-by-nc-sa 3.0 • de

It remains unclear which goiters are to be termed substernal, but a recently proposed definition is a goiter that requires mediastinal exploration and dissection for complete removal or an intrathoracic component extending >3 cm in the thoracic inlet .

Chest x-ray may show a superior mediastinal radiopacity causing the deviation of trachea to the opposite side. The superior margin of the radiopacity/mass is untraceable (cervicothoracic sign).

On ultrasound, the inability to scan the inferior most of the thyroid due to its extension posterior to the sternum makes substernal thyroid likely.

According to one study, the most important CT features in determining the necessity of sternotomy for goiter excision are the presence of an ectopic goiter, total thyroid gland volume and goiter extension below the tracheal carina .

Most anterior substernal thyroid goiters are accessed via a transcervical approach. For goiters that cannot be removed via neck dissection, such as those with complicated anatomic extensions or posterior mediastinal involvement, the surgeon may need to incorporate a partial upper sternotomy and clavicular head resection or mini-thoracotomy for adequate exposure.

A surgeon with an understanding of the radiologic reporting of a substernal goiter on a dedicated chest CT might perform a sternotomy instead of a simple low-collar incision for resection of substernal goiter.