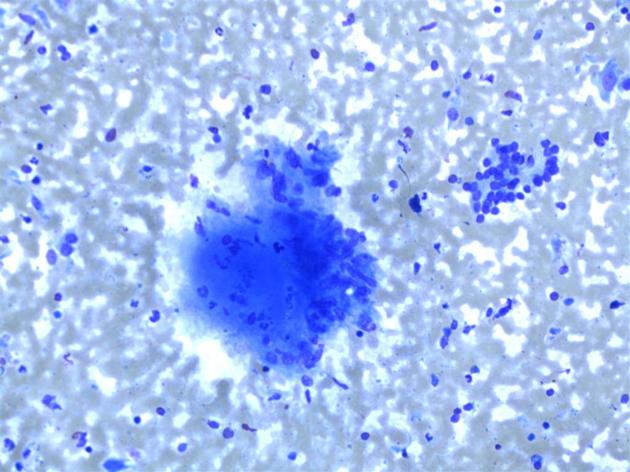 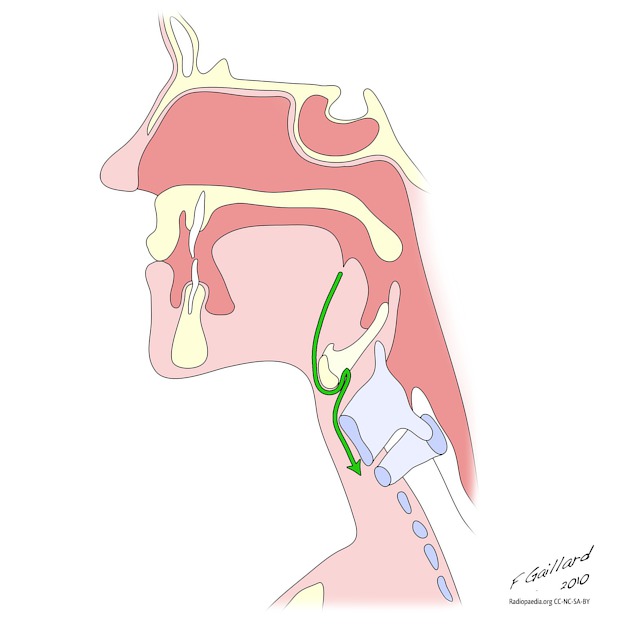 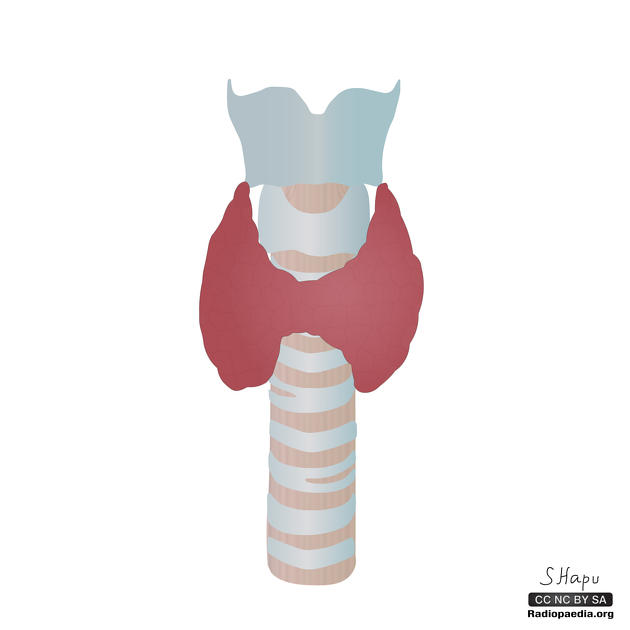 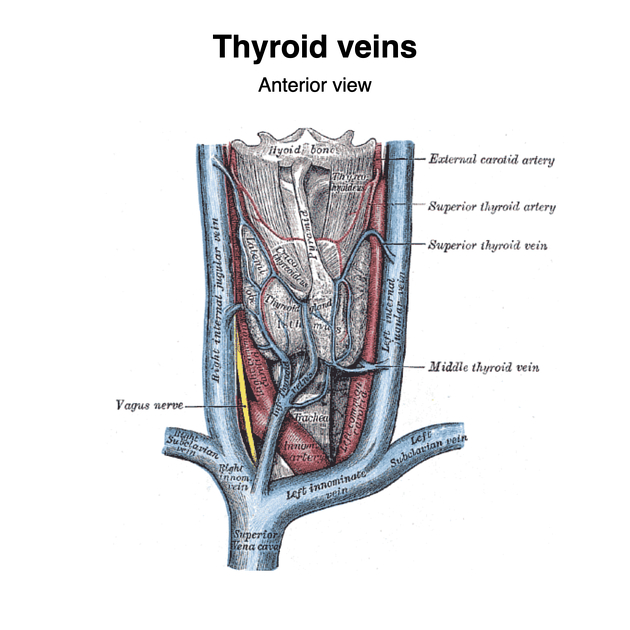 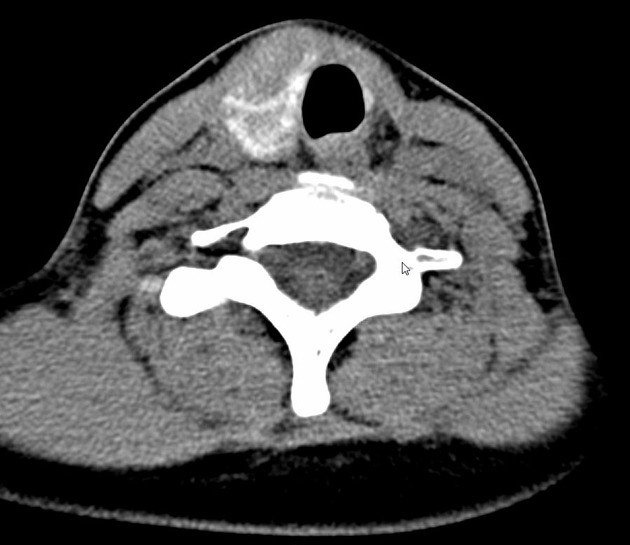 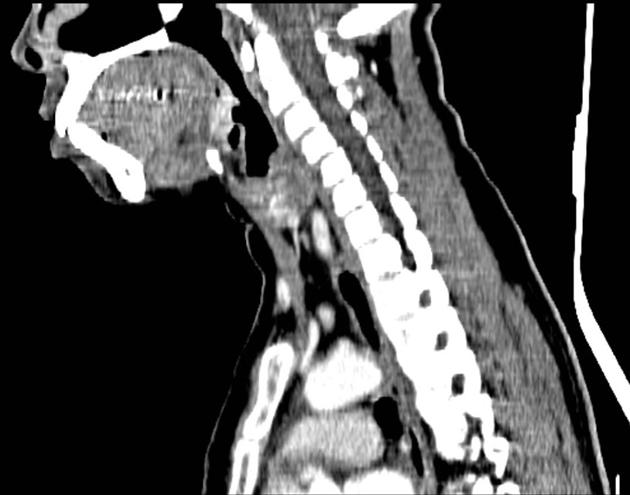 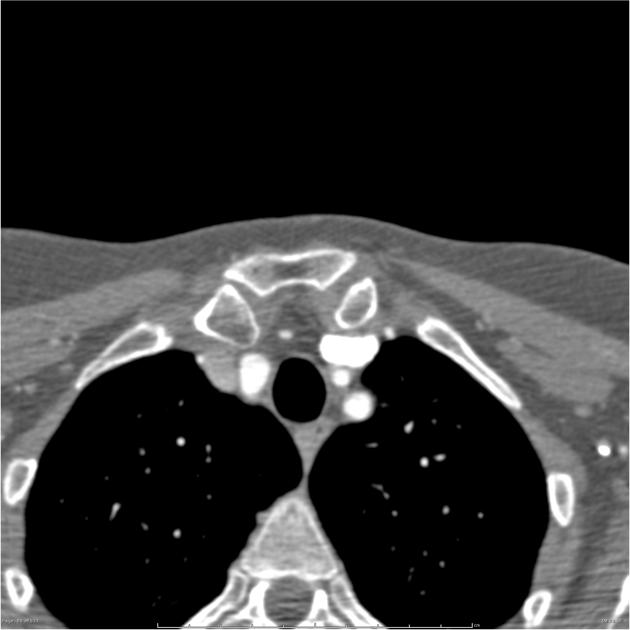 The thyroid gland is a single midline endocrine organ in the anterior neck responsible for thyroid hormone production which lies in the visceral space completely enveloped by pretracheal fascia (middle-layer of the deep cervical fascia).

The thyroid extends from C5 to T1 and lies anterior to the thyroid and cricoid cartilages of the larynx and the first five or six tracheal rings.

The thyroid is butterfly or "H"-shaped and is composed of two lobes, each with a superior and inferior pole. Usually, the superior pole is narrower than the inferior pole giving a pear-like shape to each lateral lobe. The lateral lobes are connected in the midline by a narrow isthmus which is adherent to the 2nd-4th tracheal rings. Each lobe measures approximately 4 cm in length. Average weight is 25 g; this is slightly higher in females and may increase during menstruation and pregnancy .

The parathyroid glands lie posteromedially and are sometimes intracapsular.

The ligament of Berry is a posterior extension of the thyroid capsule which attaches to the cricoid cartilage and the upper tracheal rings. It encloses a short segment of the recurrent laryngeal nerve as it ascends in the tracheo-esophageal groove. As such it is an important surgical landmark during thyroidectomies to avoid damaging the nerve.

Lymphatic drainage is multidirectional and initial lymph drainage is to perithyroid lymph nodes then onto prelaryngeal, pretracheal and paratracheal nodes (level 6 lymph nodes).

The thyroid gland develops from the proximal primitive foregut between the first and second pharyngeal pouches at the foramen cecum, in the midline of the base of the tongue. During the 5th embryonic week, a diverticulum forms at the foramen which inferiorly migrates anterior to the body of the hyoid bone, curving posterior and superiorly to reach behind the bone before once more turning inferiorly and continuing anterior to the larynx, forming the thyroglossal duct . The tip of the duct bifurcates, forming the two lobes of the gland. The parafollicular cells (C cells) responsible for calcitonin production are derived from separate tissue, the ultimobranchial body, a small diverticulum of the fourth pharyngeal pouch .

Note: although Graves disease is autoimmune it is not really a thyroiditis as it does not have a significant inflammatory component.

"Thyroid" derives from the Greek word "θνρεός" (large oblong shield) and "είδος" (-like) .  The Greek shield had a notch cut into it for the chin, and the resemblance of the shield to a particular piece of cartilage in the neck brought about the term "thyreoid cartilage" (the "e" was later dropped).

The thyroid gland was originally known as the "laryngeal gland", and was renamed the "thyroid gland" by Thomas Wharton in 1646.