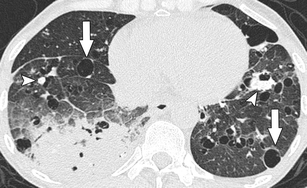 Metabolic and
storage lung diseases: spectrum of imaging appearances. A man with Sjögren syndrome and amyloidosis. HRCT image shows multiple cysts (arrows) in both lower lobes, scattered nodules (arrowheads), and right lower lobe consolidation. The appearance is similar to that of lymphoid interstitial pneumonia, and the two processes may coexist in the setting of Sjögren syndrome
insightsimaging.springeropen.com • Open Access
Hallo!
Radiopaedia • CC-by-nc-sa 3.0 • de

Sjögren syndrome, or Sjögren disease, is an autoimmune condition of the exocrine glands that produce tears and saliva.

Sjögren syndrome is the second most common autoimmune disorder after rheumatoid arthritis. There is a recognized female predilection with F:M ratio of  ≈9:1. Patients typically present around the 4to 5 decades.

Clinically, the cardinal features are glandular:

Additionally, there may be multi-organ extra-glandular involvement, which can have a wide variety of clinical features.

It is a chronic autoimmune disorder involving mainly the salivary and lacrimal glands and is associated with hyperactivity of the B-lymphocytes and with autoantibody and immune complex production.

Approximately 40% of cases occur in isolation. Known associations include:

Parotid gland involvement may give a salt and pepper appearance or a honeycomb appearance. A change in the size of the lacrimal glands associated with accelerated fat deposition may also be seen .

One of the complications of this syndrome is the development of malignant lymphoma.

This condition is named after Swedish ophthalmologist Henrik Sjögren (1899-1986) although it was first described by WB Hadden and JW Hutchinson in 1871 .