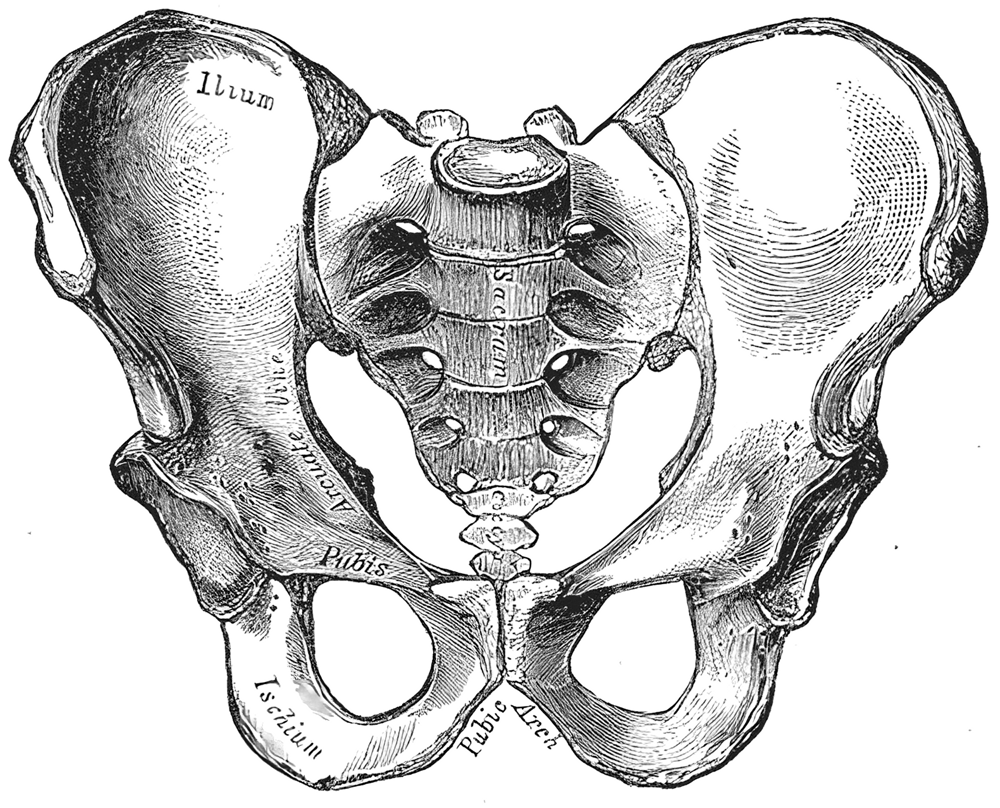 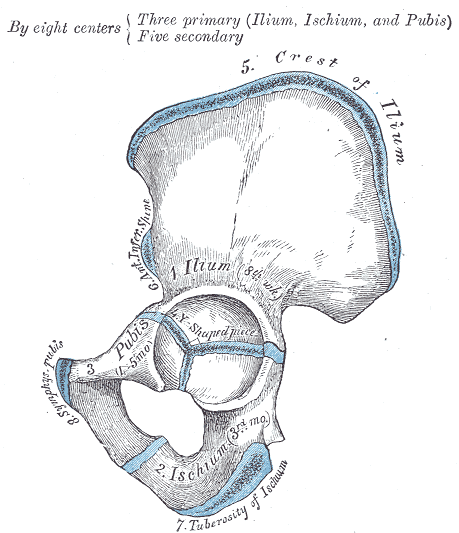 Plan of
ossification of the hip bone. The three primary centers unite through a Y-shaped piece about puberty. Epiphyses appear about puberty, and unite about twenty-fifth year.
Wikipedia • Public domain 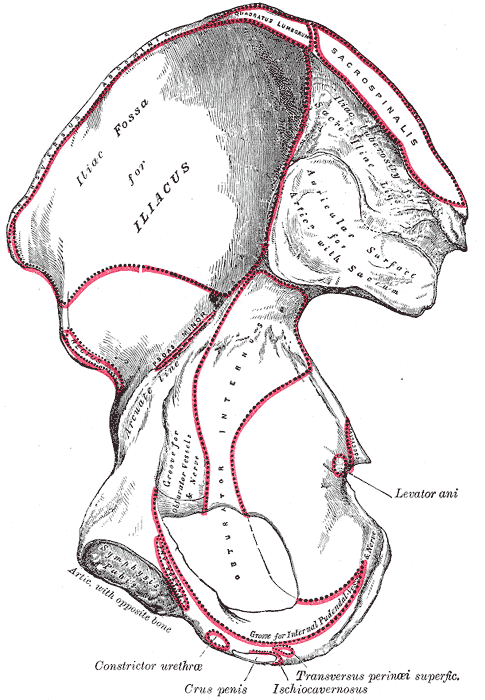 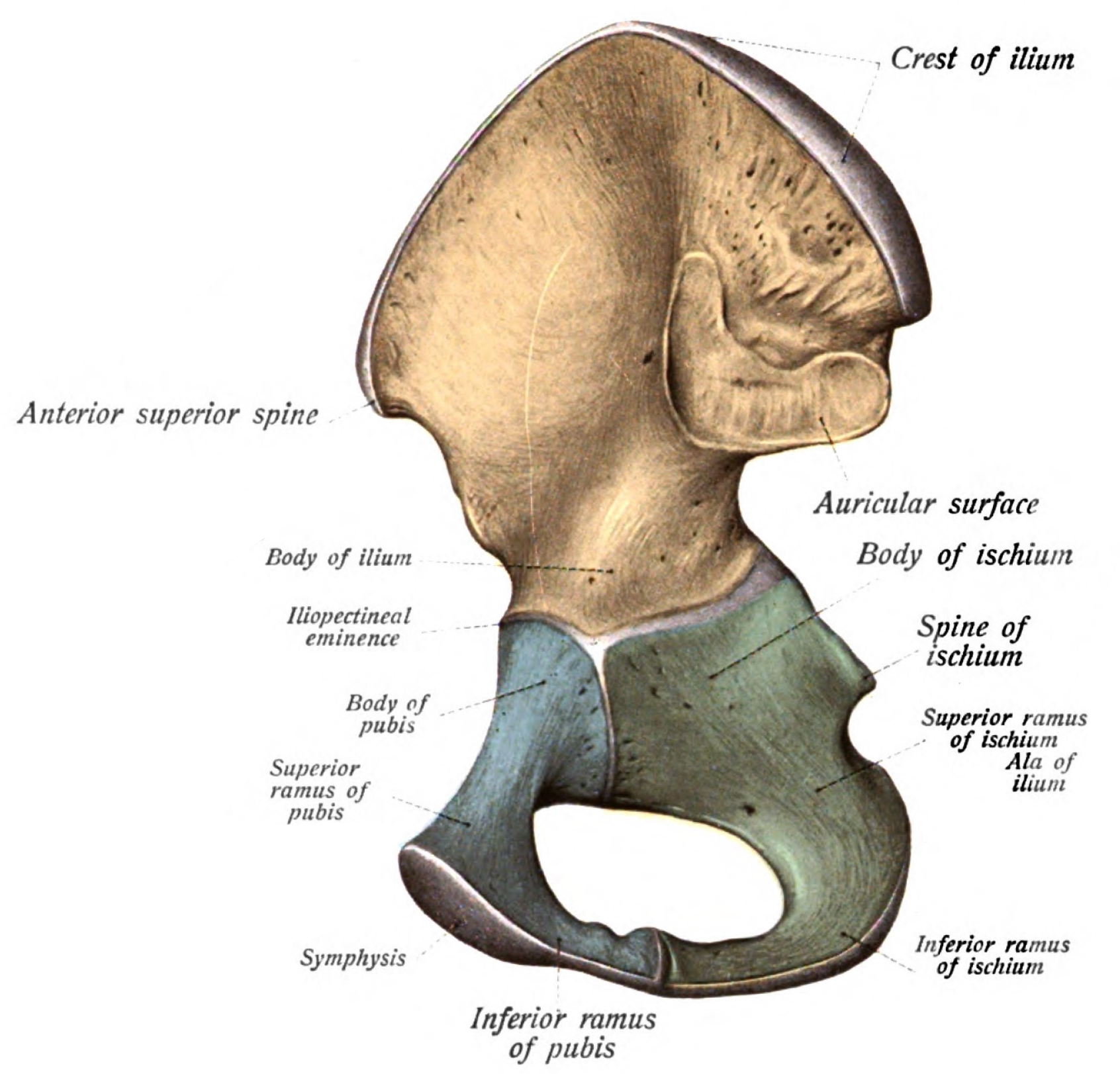 The term pelvis (plural: pelvises or pelves) can refer to either the bony pelvis or the pelvic cavity.

The bony pelvis is formed by the sacrum and coccyx and a pair of hip bones ("ossa coxae"), which are part of the appendicular skeleton. Its primary function is the transmission of forces from the axial skeleton to the lower limbs as well as supporting the pelvic viscera.

Until puberty, each hip bone consists of three separate bones yet to be fused: ilium, ischium and pubis connected by the triradiate cartilage.

The two hip bones are joined anteriorly at the pubic symphysis and posteriorly to the sacrum at the sacroiliac joint. The hip bones incorporate the acetabulum, which articulates with the proximal femur at the hip joint.

Differences between the males and female bony pelvis arise as an adaptation of the female pelvis to childbearing :

The shape of the female bony pelvis can be described using the following terms :

The pelvic brim defines the pelvic inlet and the following structures contribute to it :

The pelvic outlet is formed by the following structures :

The pelvic cavity is bounded by the bony pelvis and the pelvic musculature and primarily contains reproductive organs and the rectum. It is divided into:

The visceral contents of the pelvis is different between the sexes due to the difference in gonadal descent and gonadal tube formation .

Useful for imaging the bony pelvis and can be used in contrast studies, for example, urethrograms or intravenous pyelograms (IVP).

First-line imaging modality for assessing both the male and female pelvic viscera. Doppler ultrasound can also be used to assess the pelvic vasculature .

Due to radiation exposure to the gonads, CT is not the first line imaging test for evaluating the pelvic viscera except in the setting of trauma .