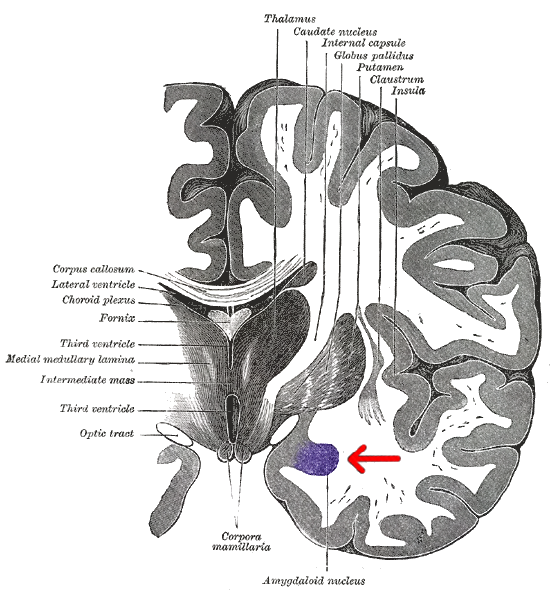 The amygdala (plural: amygdalae) is a very well studied part of the limbic system and forms part of the mesial temporal lobe.

The amygdala is a complex grey matter structure located anterior and superior to the temporal horn of the lateral ventricle and head of the hippocampus. The anterior extension of the amygdala is identified by the entorhinal sulcus.

Both the amygdala and the hippocampus are derived from the telencephalon. In 1997, Gloor classified the amygdala into three large groups of nuclei :

The output fibers of the amygdala are mainly through two efferent fiber systems:

The ventral amygdalofugal pathway arises from the dorsomedial aspect of the amygdala, and courses medially through substantia innominata, anterior perforated substance, and fibers spread into the cerebral cortex, brainstem, mediodorsal thalamus, and hypothalamus. Direct efferent fibers project to the entorhinal cortex as well as the hippocampus .

The input fibers to the amygdala are mainly represented by sensory fibers, which transfer information from numerous subcortical regions such as the hypothalamus, basal ganglia, septal region, and autonomic centers in the brainstem. Both the ventral amygdalofugal pathway and the stria terminals carry afferent and efferent fibers together. Some input fibers project to the amygdala along the olfactory stria, and directly from the temporal lobe.

The basal nucleus of Meynert, and the nucleus of the diagonal band project reciprocally to the amygdala along the ventral amygdalofugal pathway .

Amygdala is derived from the Greek amugdalē, meaning almond, as it is almond-shaped.