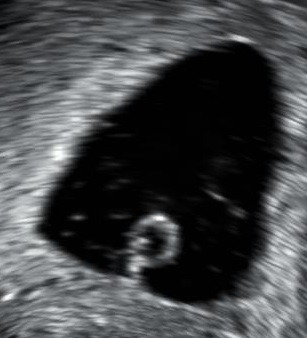 Transvaginal
ultrasonography showing a gestational sac with a diameter of 28 mm, corresponding to a gestational age of approximately 7 weeks and 5 days. It contains a yolk sac (protruding from its lower part) but no embryo, even after scanning across all planes of the gestational sac, thus being diagnostic of an anembryonic gestation.
Wikipedia • CC0
Hallo!
Radiopaedia • CC-by-nc-sa 3.0 • de

Anembryonic pregnancy is a form of a failed early pregnancy, where a gestational sac develops, but the embryo does not form. The term blighted ovum is synonymous with this but is falling out of favor and is best avoided.

The patient may be asymptomatic, presenting for an early pregnancy ultrasound. Alternatively, she may present with vaginal bleeding in early pregnancy. Due to falling hCG levels, the clinical signs of pregnancy tend to subside.

In anembryonic pregnancy, a blastocyst is formed from a fertilised ovum, but the fetal pole/embryo never develops, though histologically some fetal material can be demonstrated in most cases.

Human chorionic gonadotropin (beta-hCG) is formed due to the invasion of the endometrium by the syncytiotrophoblast, and as a result, there is a positive pregnancy test and clinical signs of pregnancy are present.

An anembryonic pregnancy may be diagnosed:

Assessment of interval mean sac diameter (MSD) growth has been shown to be insufficiently accurate in the diagnosis of anembryonic pregnancy, due to an overlap of gestational sac growth rates of viable and non-viable pregnancies.

Other ancillary features have been described, and may be considered poor prognostic factors, but do not contribute to the formal diagnosis of a failed pregnancy. These include:

Conditions that cause the appearance of an empty gestational sac include: