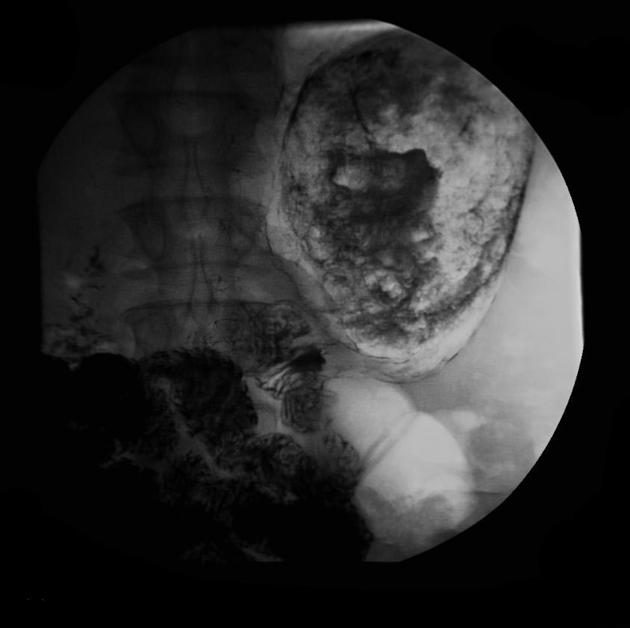 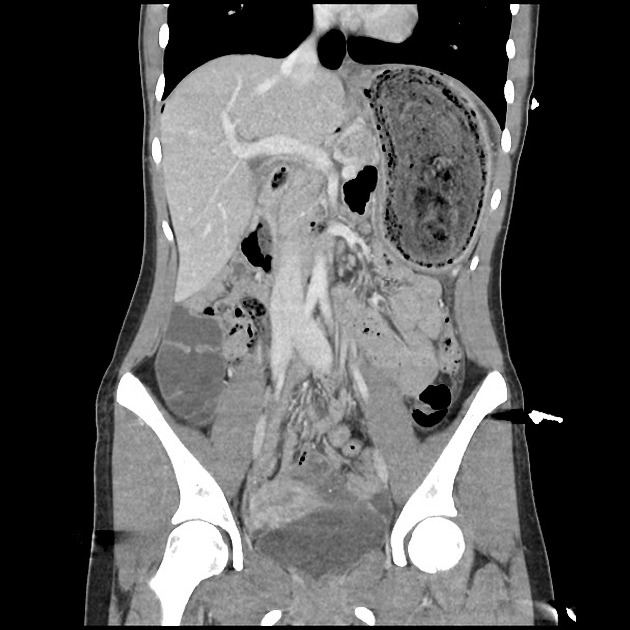 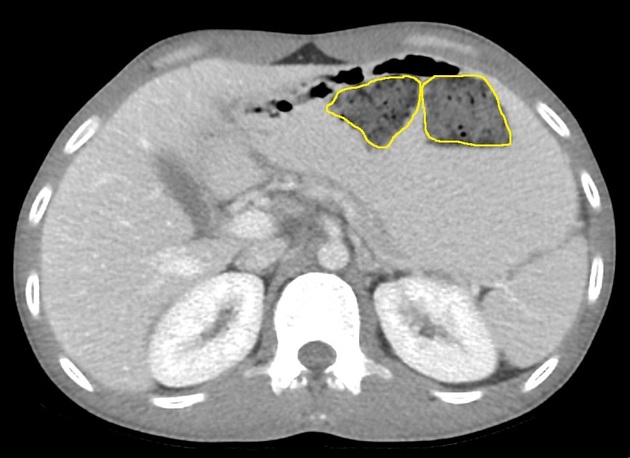 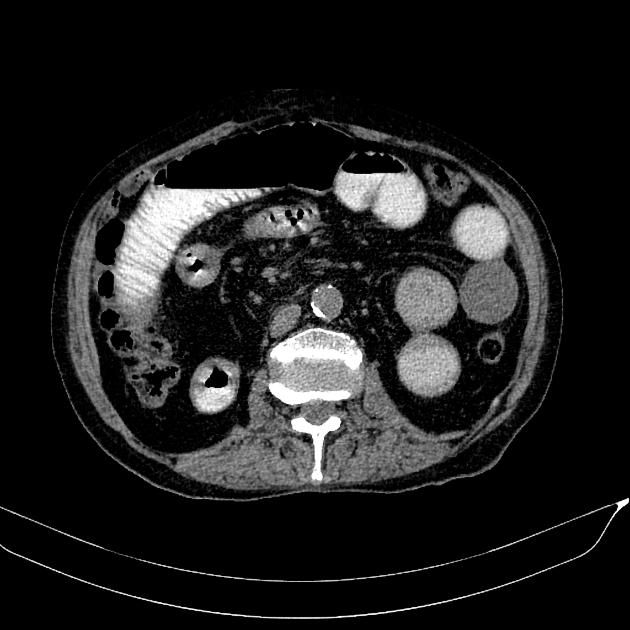 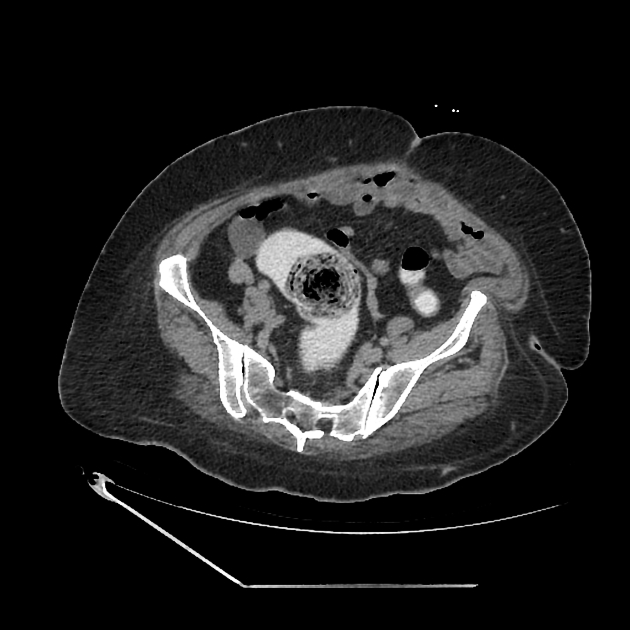 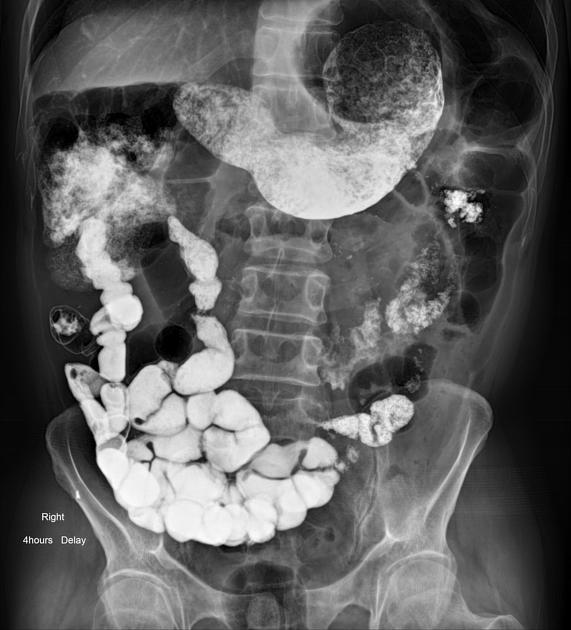 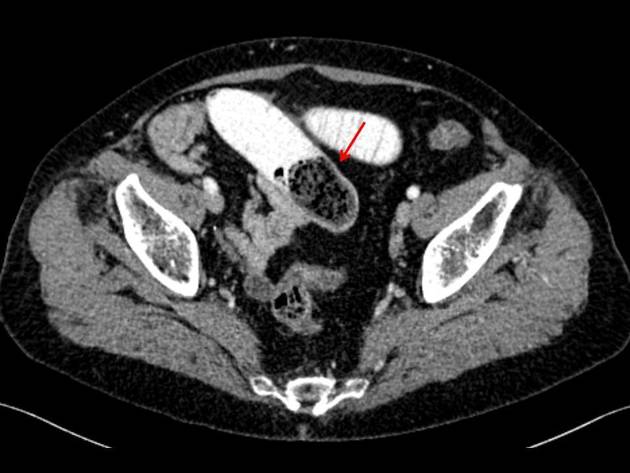 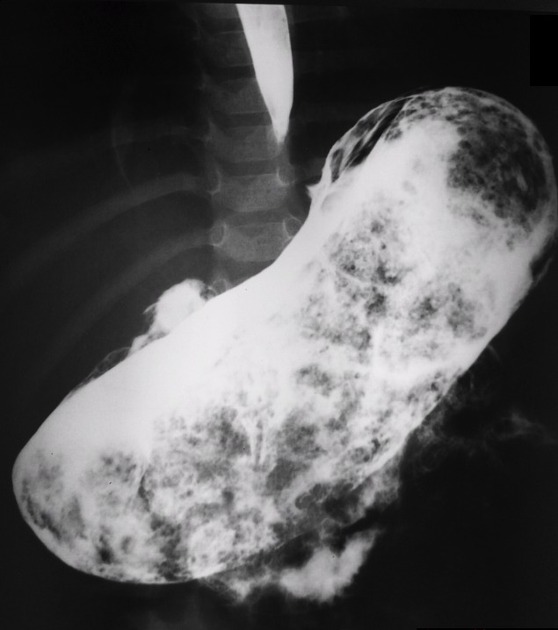 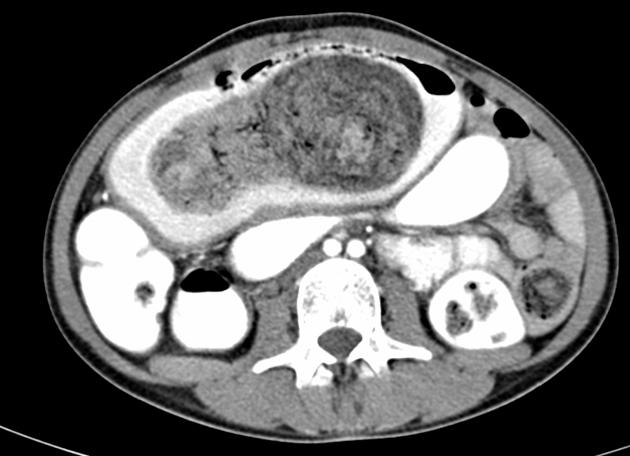 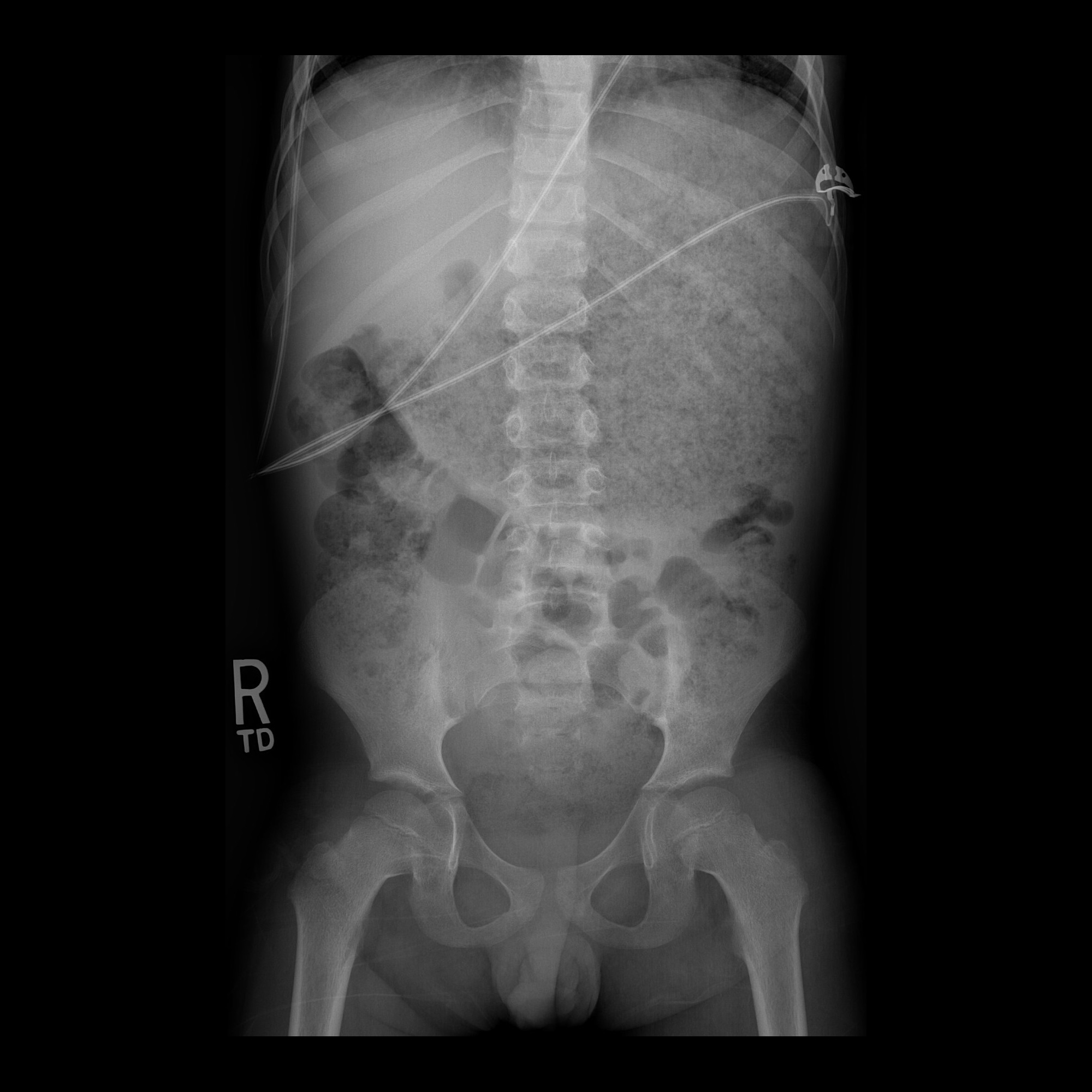 School ager
with protein calorie malnutrition who has just rapidly eaten the equivalent of 3 large meals. AXR AP taken immediately after ingesting 3 large meals shows an extremely distended stomach along with a moderate amount of stool throughout the colon. An AXR obtained the next day showed the stomach to be completely empty, thus ruling out gastric motility problems.The diagnosis was acute gastric distension from overeating, mimicing a bezoar or gastroparesis.
pediatricimaging.org • CC-by-nc-sa 4.0 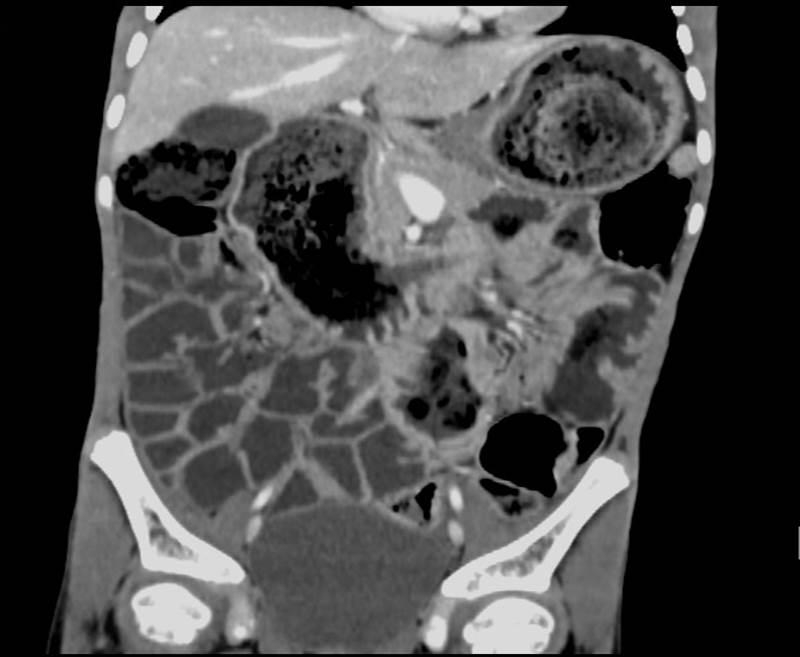 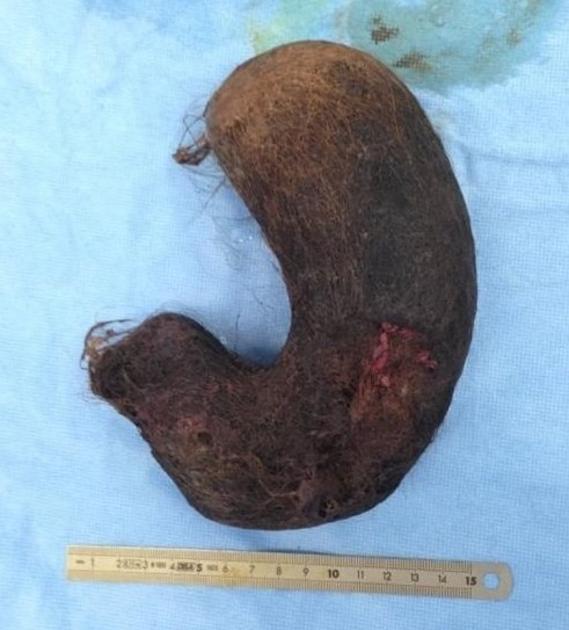 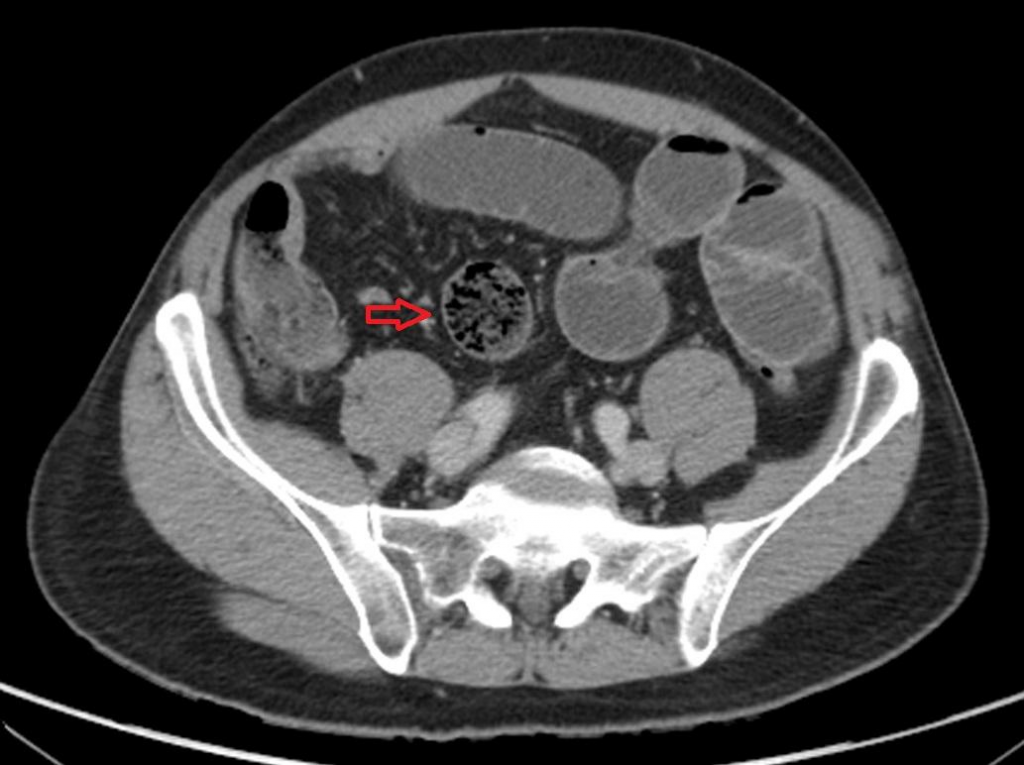 Small bowel
obstruction due to bezoar: a rare cause. Contrast-enhanced CT of abdomen, axial section: Dilated small bowel loops with an intraluminal mass with some soft tissue densities and internal air lucencies which suggests the existence of a bezoar (red arrow).
www.eurorad.org • CC by-nc-sa-4.0 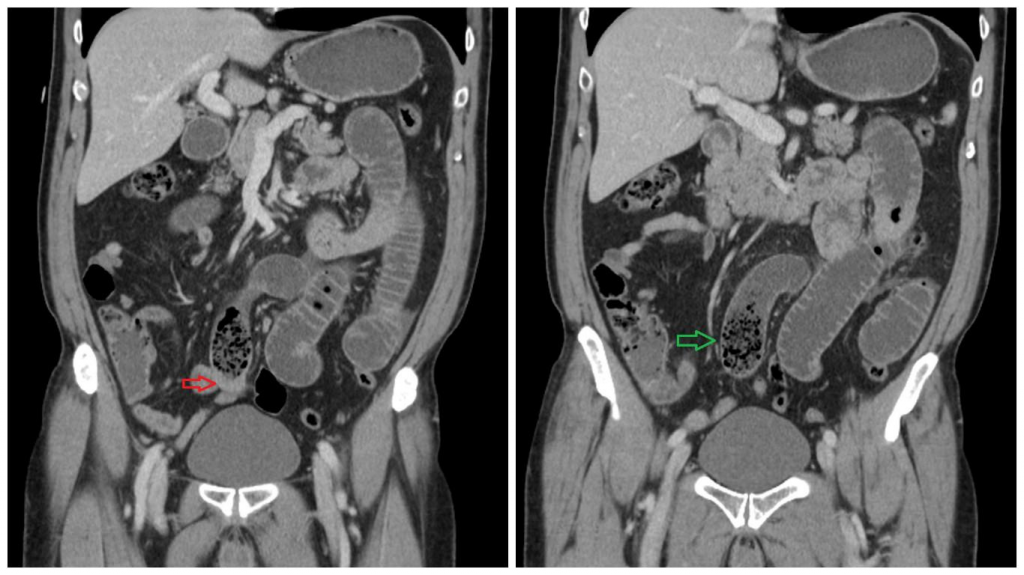 Small bowel
obstruction due to bezoar: a rare cause. Contrast-enhanced CT of abdomen, coronal sections: before the transition point (red arrow) an intraluminal mass with some soft tissue densities and internal air lucencies (green arrow) is seen.
www.eurorad.org • CC by-nc-sa-4.0 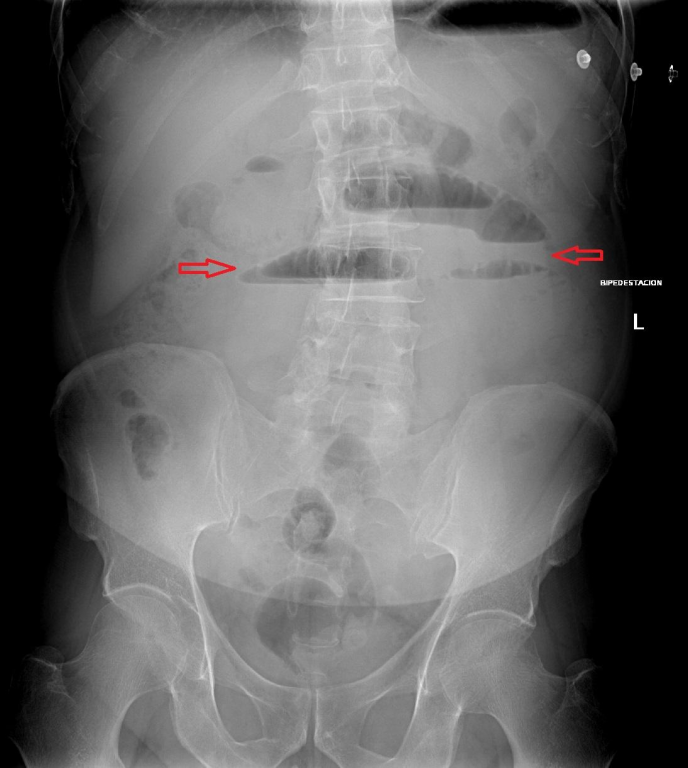 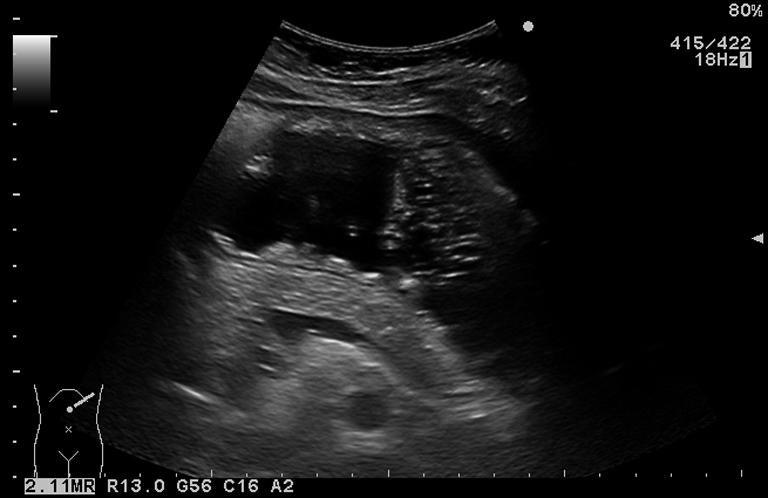 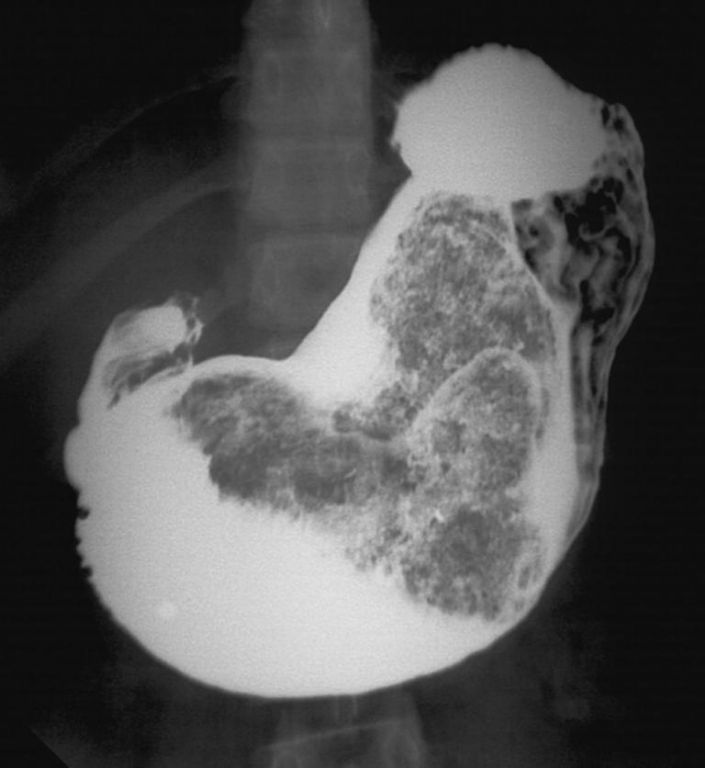 Rapunzel
syndrome: radiographic and ultrasonographic findings. A large filling defect can be seen inside the barium-filled stomach. A mottled appearance characterizes the defect.
www.eurorad.org • CC by-nc-sa-4.0 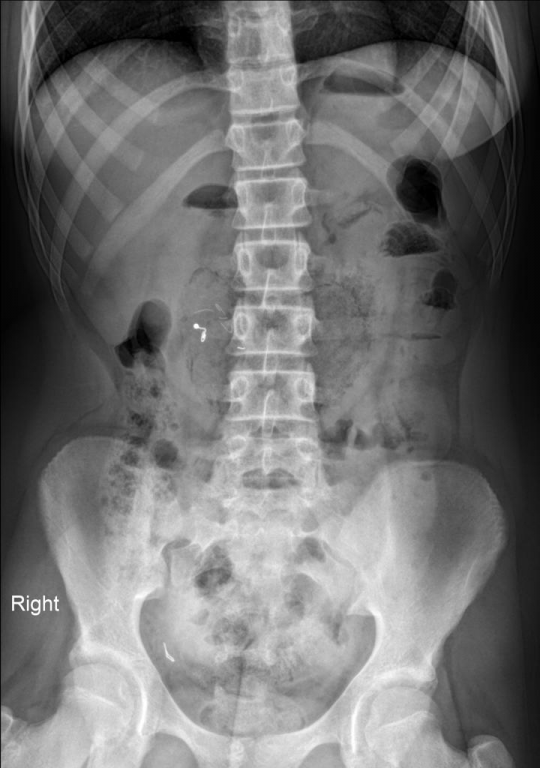 Rapunzel
syndrome: radiographic and ultrasonographic findings. Metallic foreign bodies and multiple air bubbles can be seen in the periumbilical area. There is also a metallic body along with some fluid-fluid levels superimposed in the pelvis.
www.eurorad.org • CC by-nc-sa-4.0 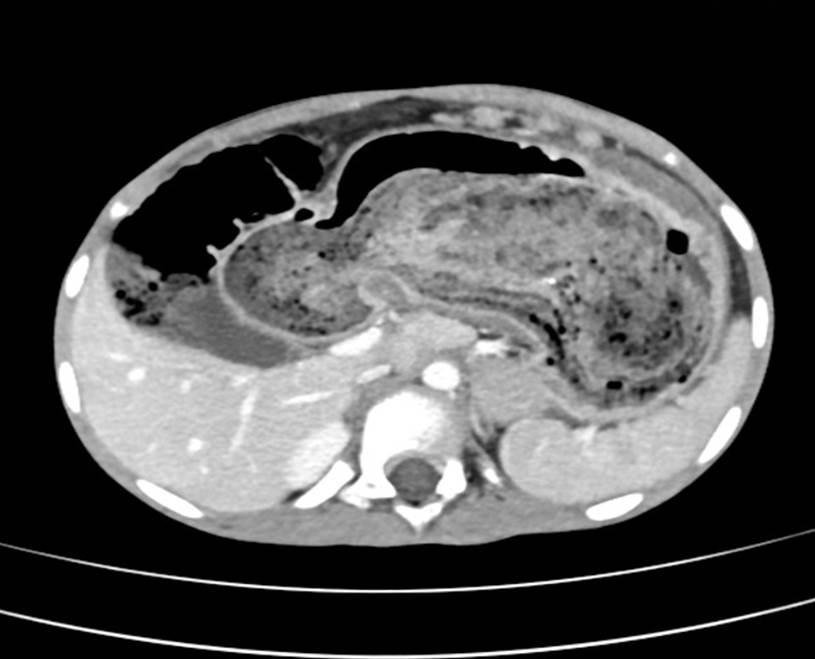 Trichobezoar:
Case report. CT abdomen axial sections showing some soft tissue densities in the stomach and duodenum which was partially adherent to the stomach and bowel wall.
www.eurorad.org • CC by-nc-sa-4.0 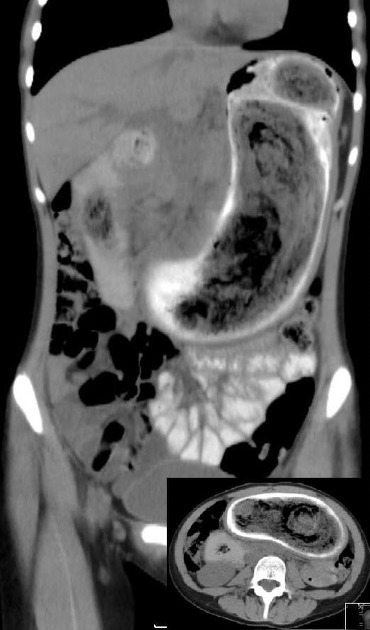 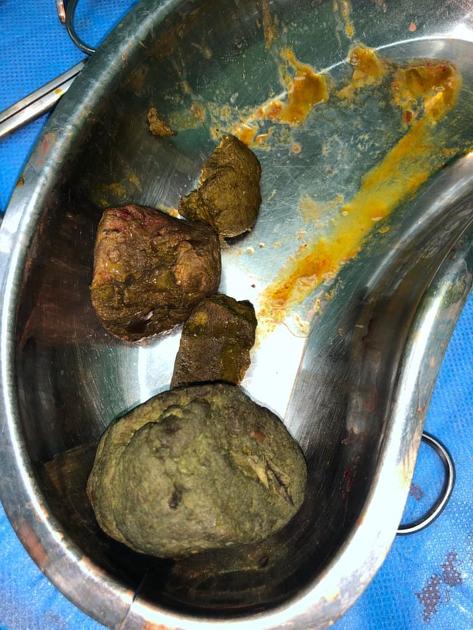 Bezoars are accumulations of indigestible contents within the gastrointestinal tract .

There are several types depending on the predominant components:

They are known to cause small bowel obstruction and sometimes CT may demonstrate the bezoar as a mass in the obstructed segment of bowel. The bezoar may be outlined by fluid in the proximally dilated small bowel, and the mass may be mottled owing to air trapped within it.

Premodern medicine considered bezoars a special kind of stone with antidote properties. Until the 18 century a gold mounted bezoar was included in the crown jewels. Some ancient pharmacopoeias list 'unicorn horns' as an acceptable alternative if a bezoar is not available. In the late 15 century, Eastern porcupine bezoars were considered especially valuable .