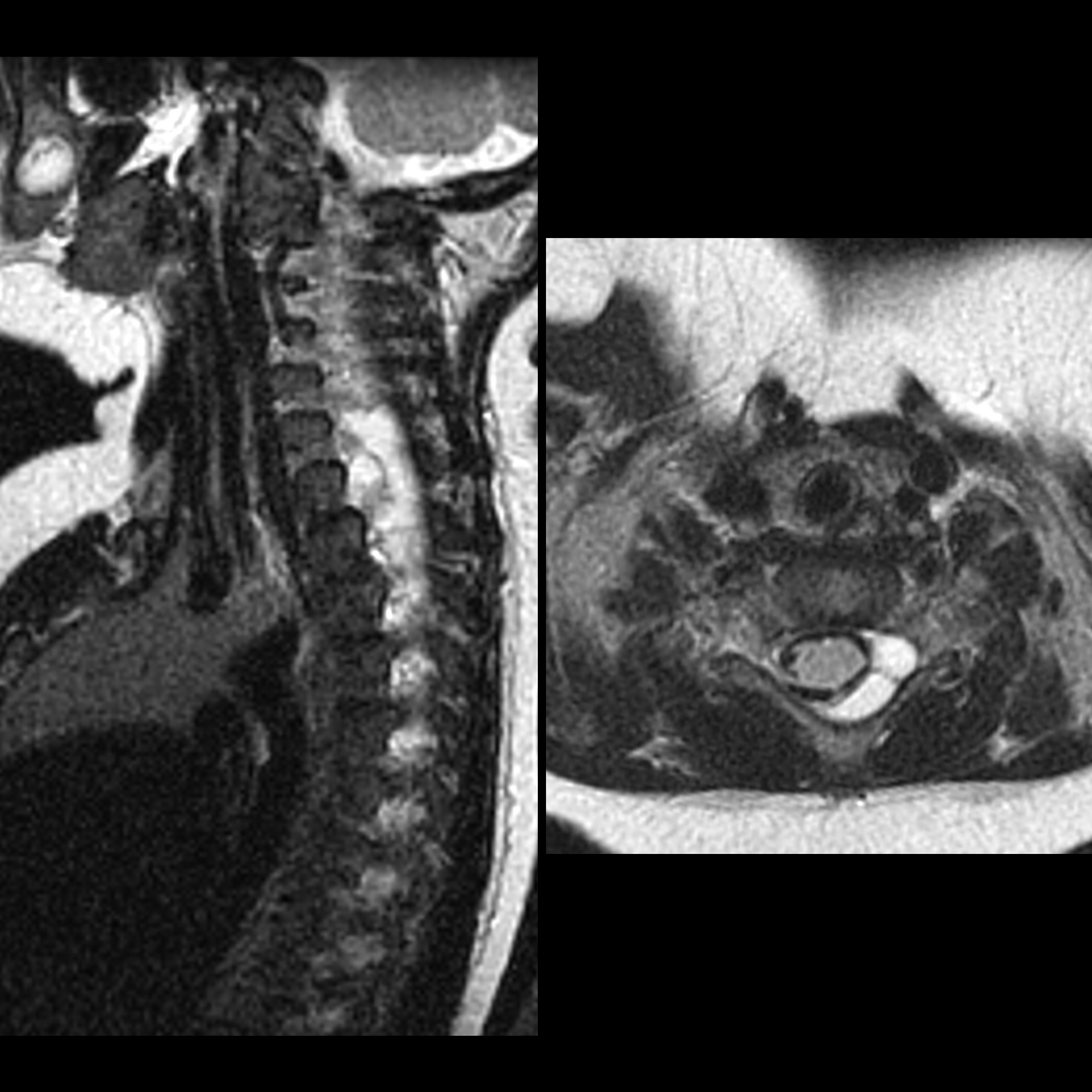 Infant with
brachial plexus injury at birth. Sagittal (left) and axial (right) T2 MRI without contrast of the cervical spine shows a left sided extradural CSF collection posterior to the spinal cord from C6 to T1. The diagnosis was avulsion pseudomeningocele with possible avulsion of the C7 nerve root.
pediatricimaging.org • CC-by-nc-sa 4.0 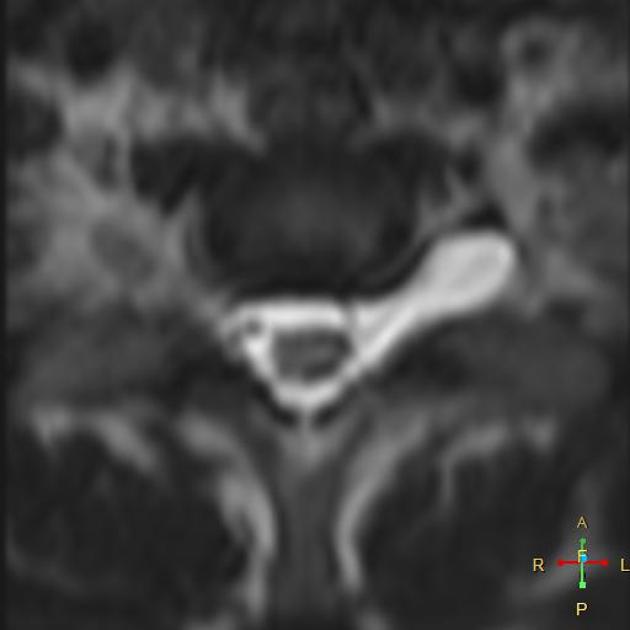 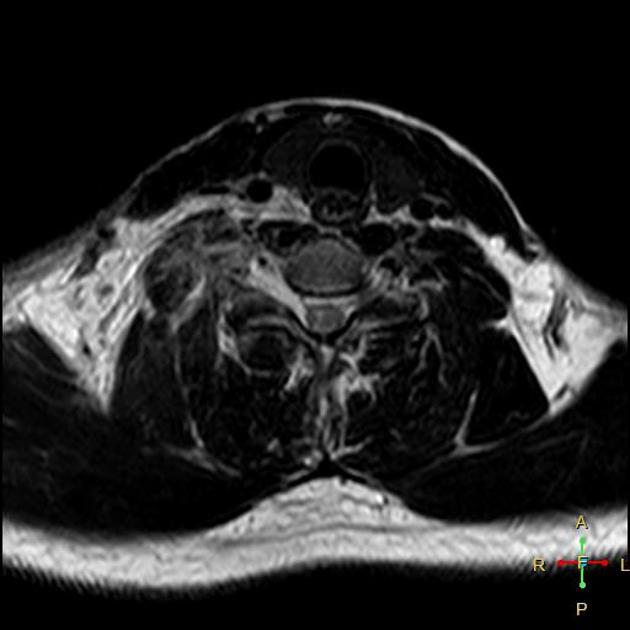 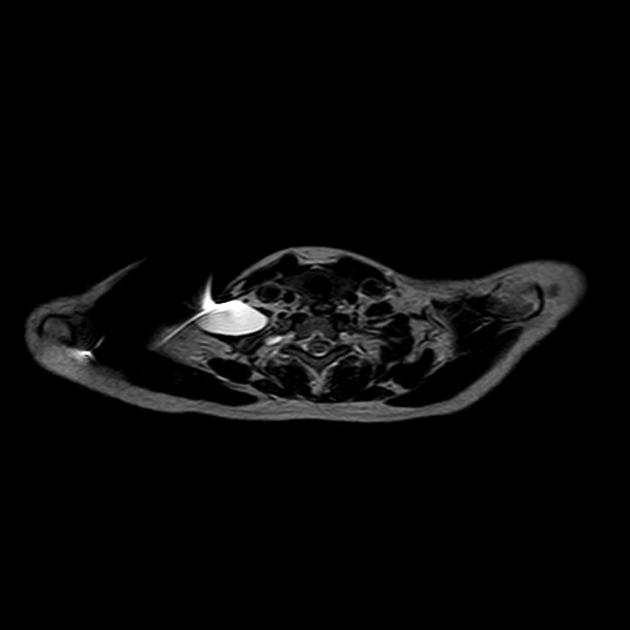 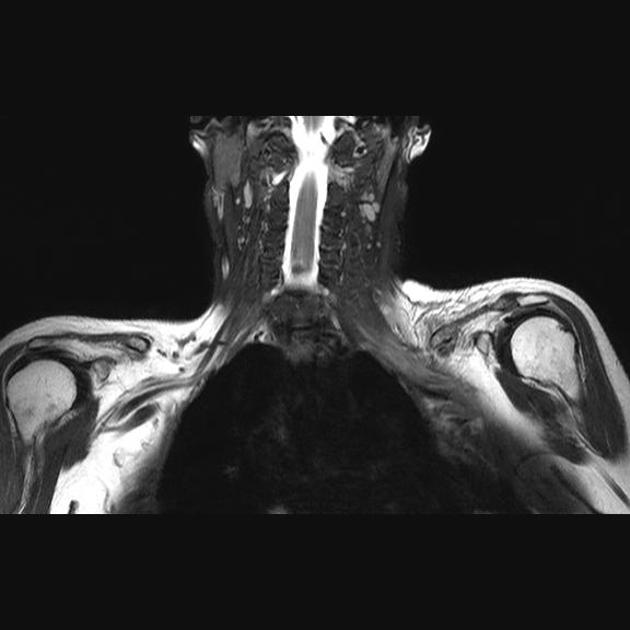 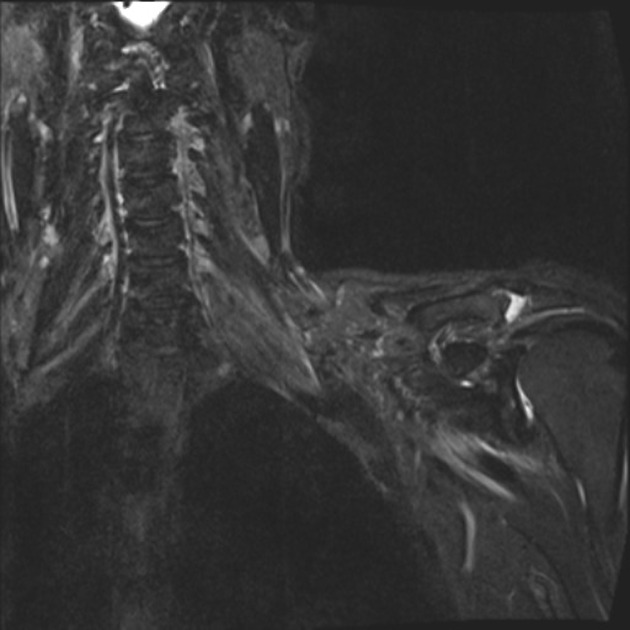 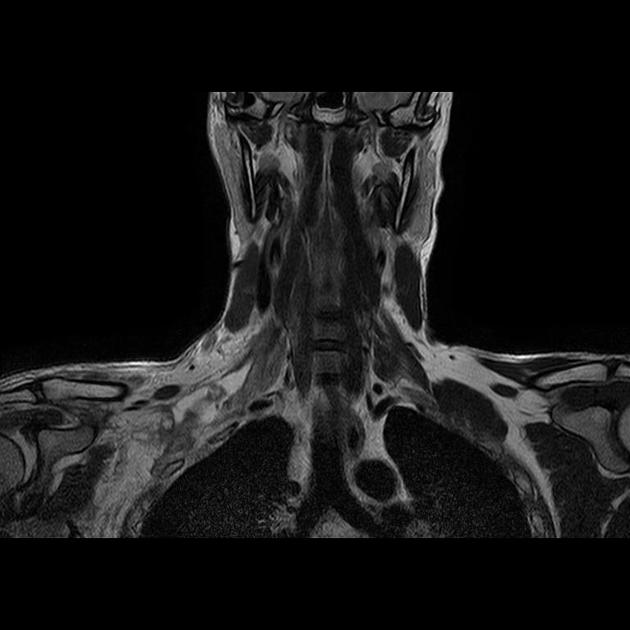 Also, birth (obstetric) injuries can involve the upper trunk leading to an Erb palsy or the lower trunk resulting in a Klumpke palsy.

Non-obstetric plexus injuries can result from both blunt and penetrating trauma with motor vehicle collisions, in particular motorcycles, the most common cause .

In the simplest form, brachial plexus injuries can be classified as preganglionic or postganglionic, however, in clinical practice they can be mixed . Each injury has very different management and prognosis.

Conventional myelography is performed via intrathecal injection of iodinated contrast media. Nerve roots can be demonstrated as well as the leakage of contrast into the meningocele.

Advantages include high spatial resolution and absence of CSF flow artefacts. Disadvantages include improper filling of the meningocele sac in the presence of a dural scar, intra- and post-procedural complications e.g. hematoma, infection, allergic reaction and headache.

Together with direct visualization of nerve root and sleeves, spinal cord injuries present as edema in the acute stage and myelomalacia in the chronic stage. In preganglionic injury, there is usually an avulsion pseudomeningocele, which is a CSF filled structure at the site of the nerve root that does not contain any neural elements. There may be associated cord hematoma. Postcontrast enhancement of nerve root suggests functional impairment even if it appears continuous. Abnormal enhancement of paraspinal muscles is an indirect sign of root avulsion.

This uses steady-state coherent gradient echo sequences which imply high contrast to noise ratio and reduce flow artifacts. It can easily identify nerve roots and meningocele sac even if there are intradural scars.

A recent modality which can demonstrate postganglionic injuries as discontinuation of injured nerves.

Depends on the site of injury and degrees of damage . Preganglionic injury is repaired by nerve transfer (usually an intercostal nerve) to the denervated muscles, as there is no chance of spontaneous neural repair. Postganglionic injury is treated conservatively or with nerve grafting, where a nerve autograft is sutured between the excised damaged nerve segment.