A
lipohemarthrosis seen in a person with a subtle tibial plateau fracture. The arrow indicates a fluid level between the upper fat component and the lower blood component.
Wikipedia • CC BY-SA 3.0 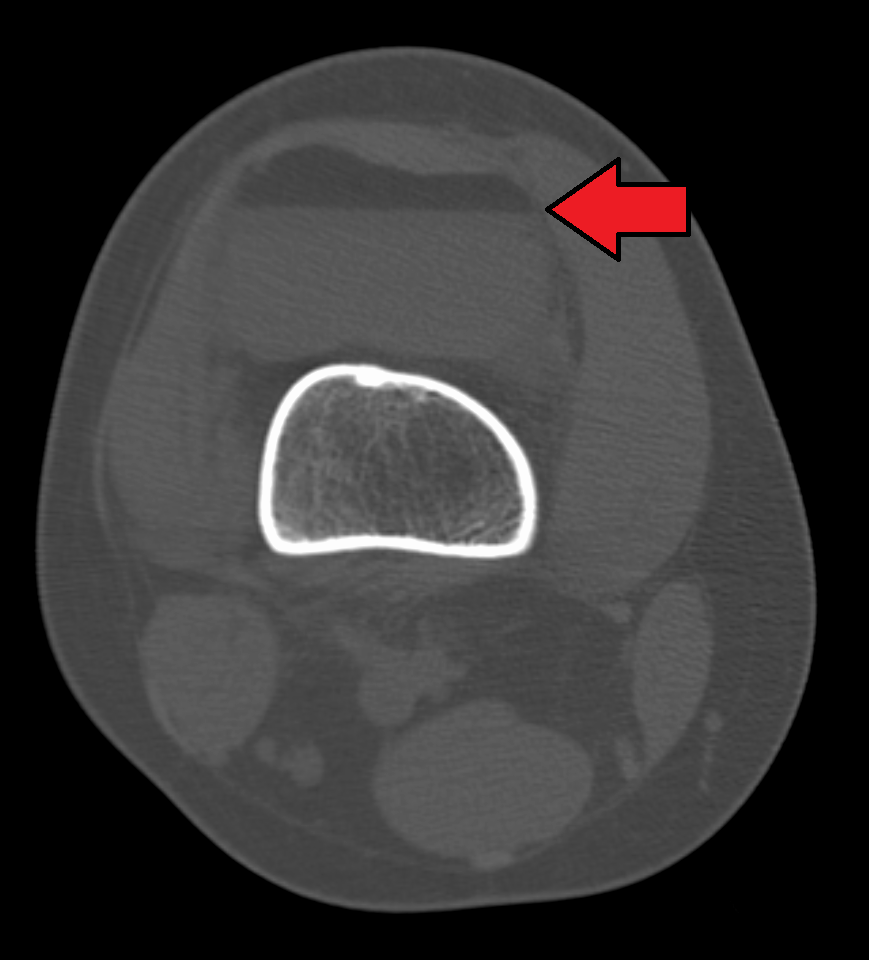 Lipohemarthrosis
due to a tibial plateau fracture
Wikipedia • CC BY-SA 4.0

Lipohemarthrosis results from an intra-articular fracture with escape of fat and blood from the bone marrow into the joint, and is most frequently seen in the knee, associated with a tibial plateau fracture or distal femoral fracture; rarely a patellar fracture. They have also been described in hip, shoulder, elbow and wrist fractures .

It is well known that fat floats on water as it is less dense. The fatty marrow separates from the water-based blood and layers above it, forming a fat-fluid level (also known as the FBI sign). This can be seen on all modalities.

The fat-fluid level is seen on any horizontal beam radiograph, such that the beam is tangential to the fat-blood interface. In the knee this is best achieved with a cross-table horizontal lateral view, where a long horizontal line is seen in the suprapatellar pouch. Ideally the patient has been lying in that position for ~5 minutes to allow the fat and blood to adequately separate .

In patients with a prominent suprapatellar plica, a double fat-fluid level may be seen .

It is important to remember that up to 64% of tibial plateau fractures do not have an x-ray visible lipohemarthrosis, but rather a simple hemarthrosis , thus absence of the finding does not exclude an intra-articular fracture.

It is also important to remember that a simple hemarthrosis can separate into serum and red cells (hematocrit effect) and create a subtle fluid-fluid level. This should not be mistaken for a lipohemarthrosis . In some cases, all three layers can be seen, a so-called lipohydrohaemathrosis. This tri-level appearance is sometimes known as parfait sign.

CT and MRI having much higher sensitivity to density differences are not only very sensitive at identifying intra-articular fat, but also identify a hematocrit effect, with three layers visible (fat above, serum/synovial fluid middle, red blood cells below) .

The upper layer will follow fat on all sequences and saturate on fat-saturated sequences.