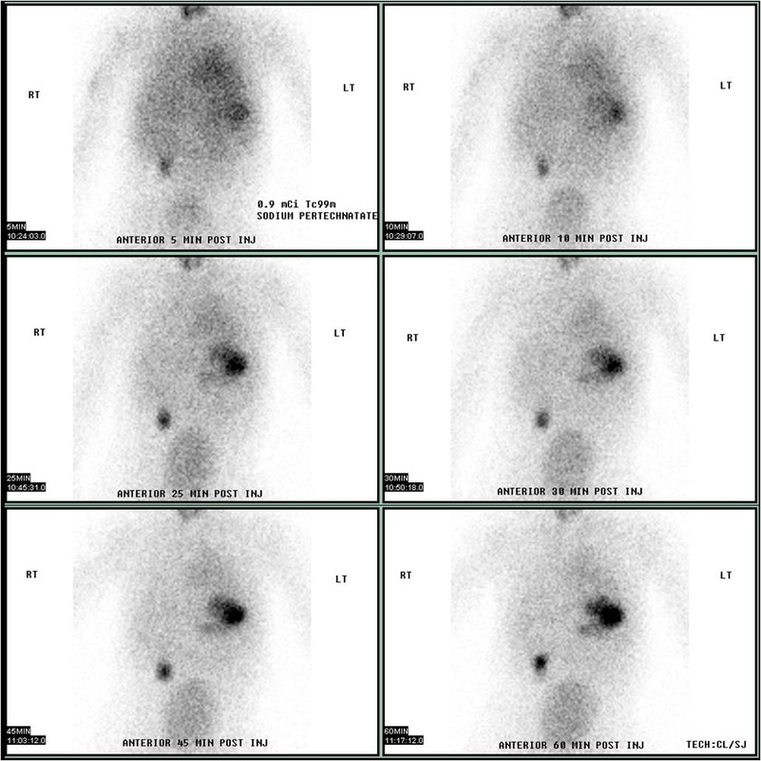 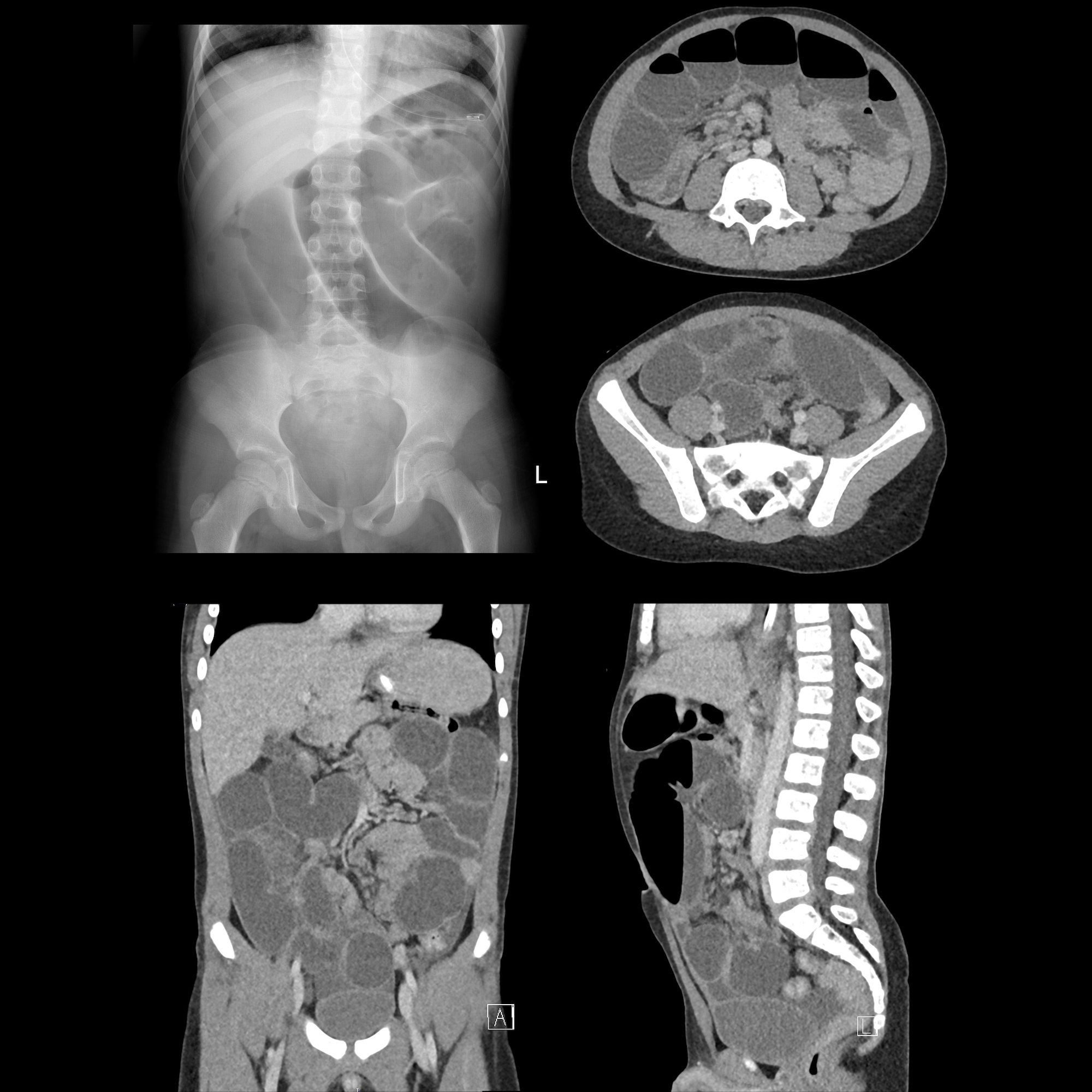 School ager
with nausea and vomiting. AXR supine (upper left) and coronal CT with contrast of the abdomen (lower left) show multiple dilated loops of small bowel with thin walls throughout the abdomen. The lower axial CT (upper right) shows a small cystic structure in the midline with a thicker wall than the surrounding dilated bowel which is also seen on the midline sagittal CT (lower right) just beneath the umbilicus.The diagnosis was distal small bowel obstruction due to Meckel’s diverticulum.
pediatricimaging.org • CC-by-nc-sa 4.0 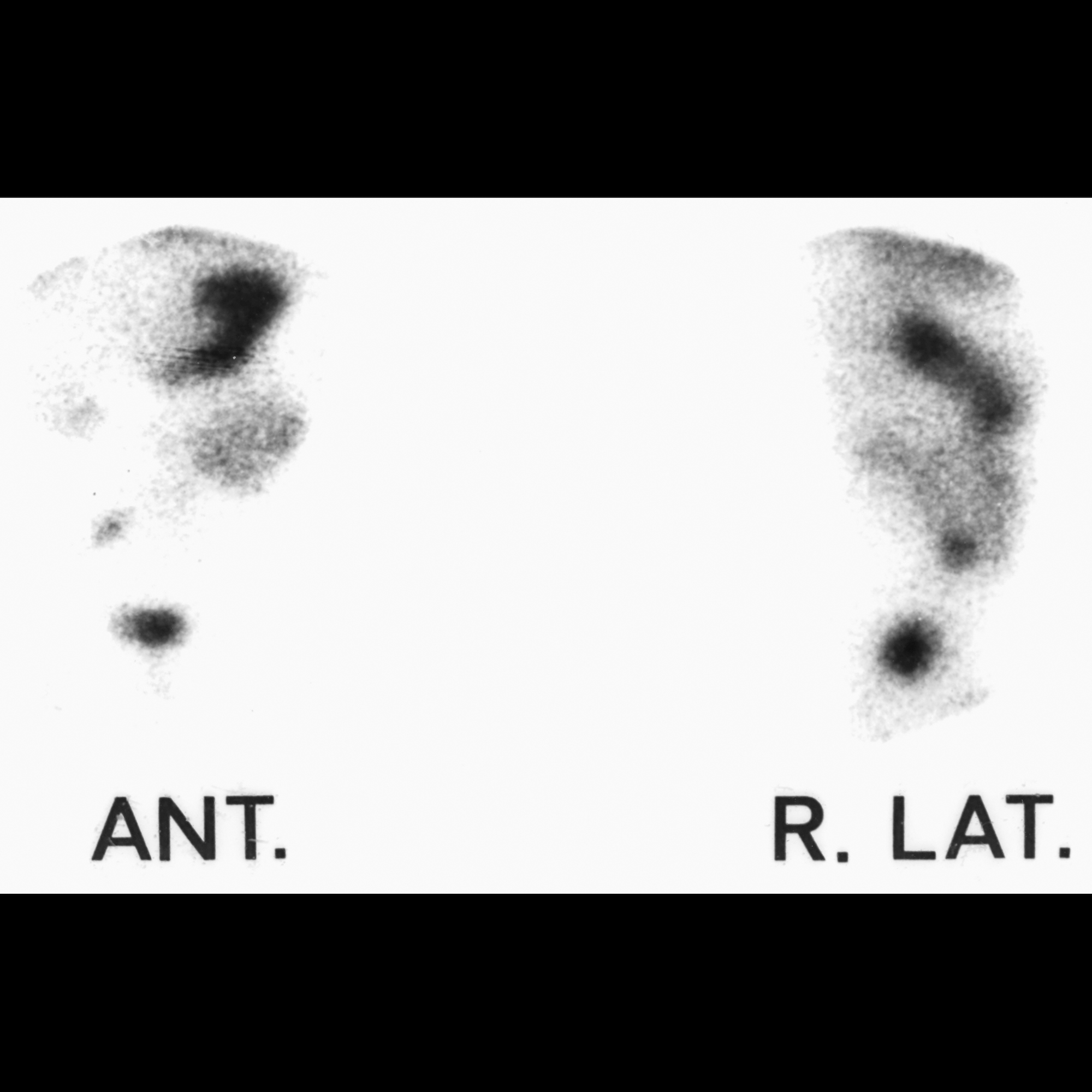 Toddler with
drainage of stool from the umbilicus. AP delayed image (left) from a Tc-99m pertechnetate scan (Meckel’s scan) shows a focal round concentration of radiotracer in the right lower quadrant superior and lateral to the midline bladder which is seen in the middle of the lower abdomen superior to the bladder on the lateral (right) delayed image.The diagnosis was Meckel’s diverticulum with a patent omphalomesenteric duct.
pediatricimaging.org • CC-by-nc-sa 4.0 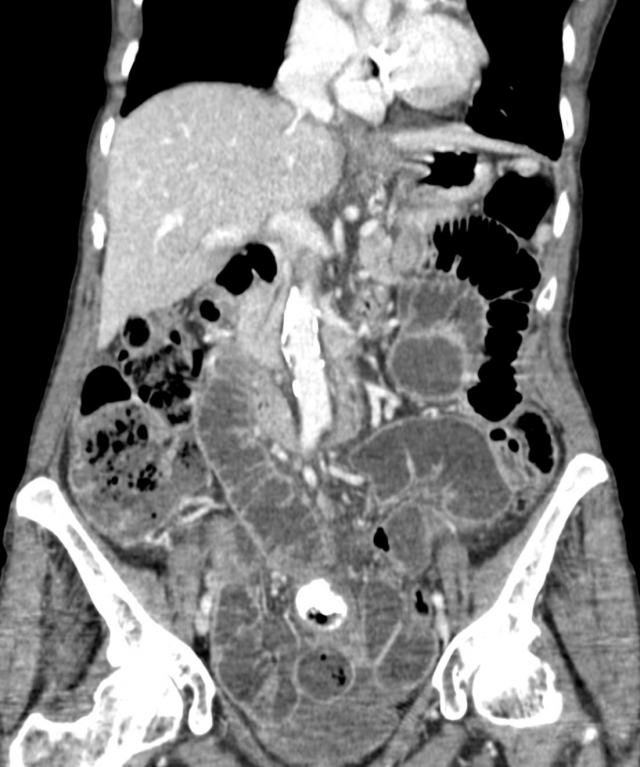 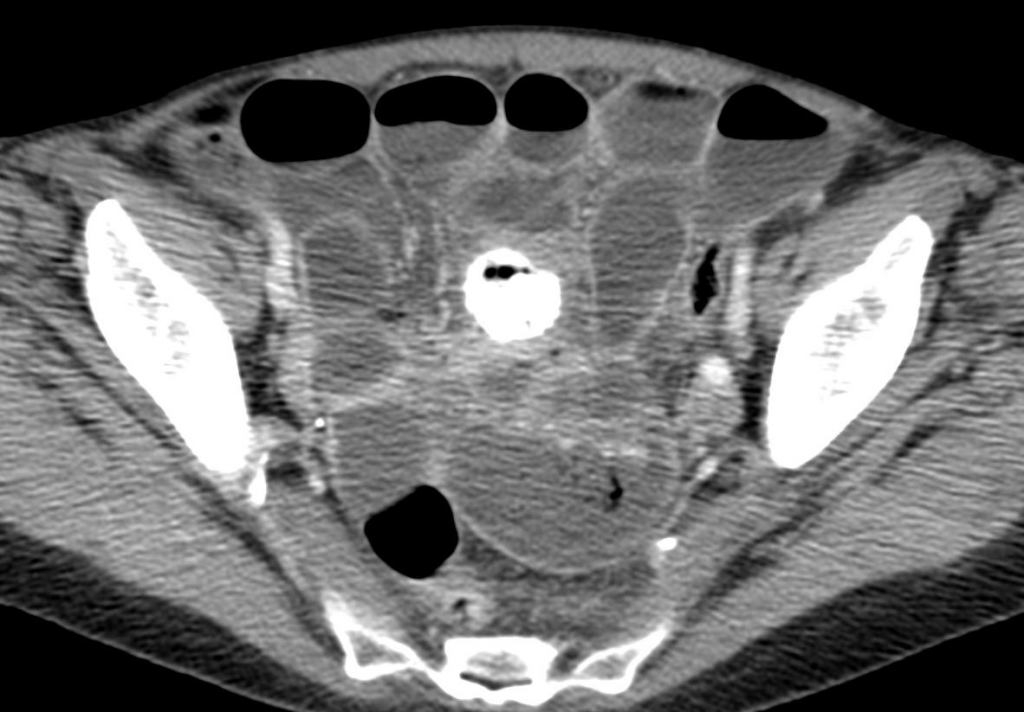 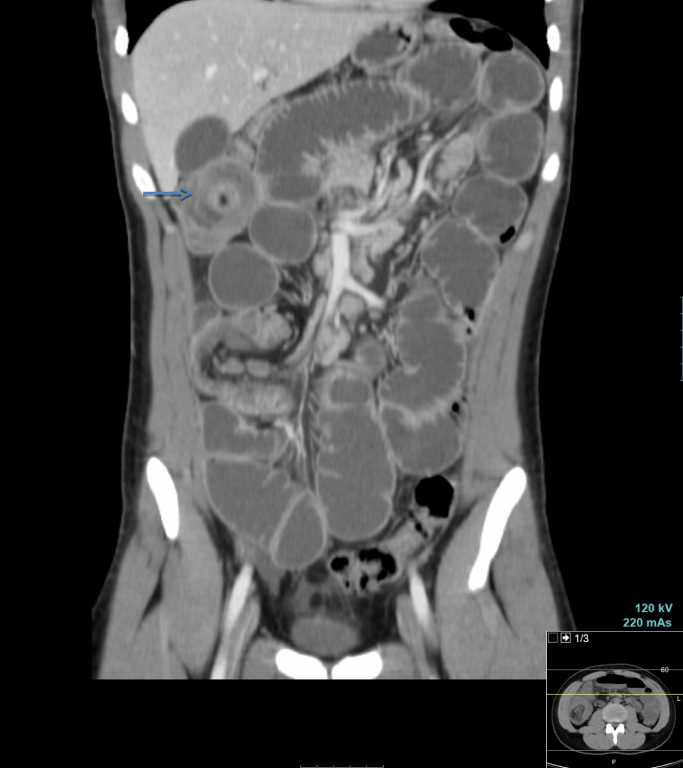 Meckel diverticulum is a congenital intestinal diverticulum due to fibrous degeneration of the umbilical end of the omphalomesenteric (vitelline) duct that occurs around the distal ileum. It is considered the most common structural congenital anomaly of the gastrointestinal tract.

Approximately 2% (range 0.3-3%) of all individuals may have a Meckel diverticulum (see the rule of 2s). While traditionally described to have increased male predilection, it may occur with equal frequency in both sexes although symptoms from complications are more common in male patients . Most patients with a complication are thought to present in the first two years of life .

Meckel diverticulum is a true diverticulum (i.e. all layers of the gastrointestinal tract are present in its wall) and arises from the antimesenteric border of the small intestine.

It can be as long as 5 cm with diameters up to 2 cm. Most (75%) Meckel diverticula are found within 60 cm (range 40-100 cm) of the ileocecal valve . It can be seen in the midline, or on either side of the midline. However, midline and right iliac fossa location are the commonest. Its level on CT can be either superior or inferior to the terminal ileum .

Meckel diverticula are lined with heterotopic mucosa in up to 60% of cases:

It is considered a remnant of the omphalomesenteric-vitelline duct, which connects the yolk sac to the midgut through the umbilical cord. This duct is typically obliterated by the 5-8 week of gestation. Failure of closure results in:

Imaging these may occasionally be detected incidentally or may be identified if there is a complication.

Small bowel enemas have sometimes been used for the diagnosis in some centers, although a precise technique is required if the diagnosis is to be excluded with any degree of certainty .

Usually of limited use in the diagnosis of an uncomplicated Meckel diverticulum. Ultrasound may show a blind-ending peristaltic loop connected to the small bowel.

CT is of limited value in uncomplicated cases, as the diverticulum may resemble a normal bowel loop. CT may show a fluid- or air-filled blind-ending pouch that arises from the antimesenteric side of the distal ileum.

It is possible for the diverticulum to invert and appear as an intraluminal polypoid lesion .

When investigated in the context of gastrointestinal hemorrhage, angiography/CT angiography may show the persistent omphalomesenteric artery in most individuals with a Meckel diverticulum although recognition of the artery may be difficult due to overlying vessels.

It is named after the German anatomist Johann Friedrich Meckel (the younger), (1781-1833) who described its anatomy and embryology in 1809 .