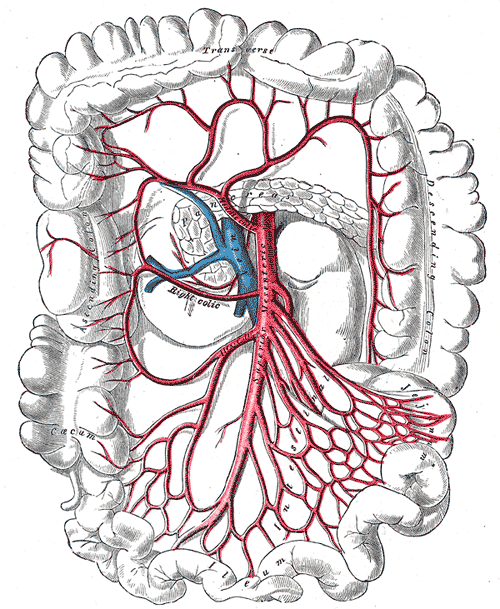 The superior mesenteric artery (SMA) is one of the three non-paired major visceral arteries in the abdominal cavity arising from the abdominal aorta and supplying the midgut.

Single vessel arising anteriorly from the abdominal aorta at the level of L1, usually just below the celiac trunk.

Courses anteroinferiorly, behind the neck of the pancreas and splenic vein, crossing anterior to the left renal vein. It emerges anterior to the uncinate process of the pancreas and crosses anterior to the third part of the duodenum. It then enters the upper portion of the small bowel mesentery and runs along the root of the mesentery downwards to the right. Branches to the jejunum and ileum are given off to the left, and branches to the proximal and mid colon are given off to the right.

The superior mesenteric vein (SMV) should be positioned to the right of the SMA, especially the first 3 cm distal to its origin. Reversal of SMA/SMV relationship is classically associated with intestinal malrotation, although distally (>6 cm from origin) this may be a normal finding .

The superior mesenteric artery is the artery to the midgut. It supplies the gut from the ampulla of Vater of the 2 part of the duodenum to the distal third of the transverse colon, and includes structures in between such as :

The inferior pancreaticoduodenal artery also supplies the head of the pancreas.