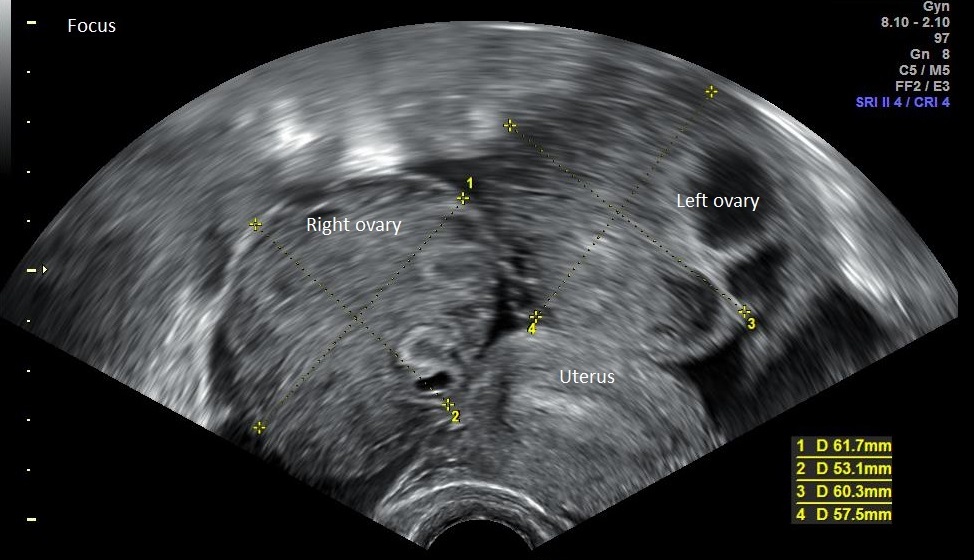 The syndrome is relatively common, occurring in ~5% of patients undergoing in vitro fertilisation (IVF). There is probably an even higher incidence of the syndrome in egg "donors" due to their young age ( which is a known risk factor for the disease) however there is a known problem of lack of reporting for such cases.

The clinical picture may vary from abdominal distension and discomfort to potentially life-threatening capillary leak with fluid sequestration in a third space, and massive ovarian enlargement.  Pain, abdominal distention, nausea, and vomiting are frequently seen as symptoms.

It is characterized by massive cystic ovarian enlargement and fluid shift from the intravascular compartment into the peritoneal, pleural or pericardial cavities. The vascular fluid leakage is thought to result from an increased capillary permeability of mesothelial surfaces under the action of one or several vasoactive ovarian factors produced by multiple corpora lutea. Acute pelvic pain can result from stretching of the ovarian capsule or hemorrhage/rupture of a follicle.

This subtype occurs in the absence of any external stimulation. This form can occur in pregnancy .

There are also very rare sporadic forms which carry a genetic component. These have an association with early pubertal development and primary hypothyroidism (Van Wyk-Grumbach syndrome). Ovarian stimulation in the hypothyroid child may result in estrogen production, breast development, endometrial proliferation, and vaginal bleeding. It is likely that raised TSH concentrations bind and stimulate the FSH receptor, although a similar overlap phenomenon might occur at the level of the pituitary, with enhanced TRH production stimulating the GnRH receptor with subsequent ovarian enlargement. The cystic ovarian enlargement resolves with thyroid hormone replacement. A hyperstimulation phenomenon in patients with an abnormal FSH receptor has been described.

Based on the clinical manifestation and imaging findings, the modified Golan classification divides OHSS  into the following three categories with 5 grades :

Imaging findings can be similar on ultrasound, CT and MR imaging.

The syndrome is usually self-limiting in most cases and management is mainly supportive, however, cases with fatal outcome have been reported . Severe cases usually require hospitalization and close monitoring of hematocrit, liver function, renal function, serum electrolytes and oxygen saturation.

The profoundly altered maternal environment of OHSS is a significant risk factor for miscarriage, especially when occurring in the early phase after IVF (defined as <10 days after oocyte retrieval) .

Familiarity with ovarian hyperstimulation syndrome and the appropriate clinical setting should help avoid the incorrect diagnosis of an ovarian cystic neoplasm. On encountering severe forms not suspected by the clinician suggesting the diagnosis may reduce both morbidity and mortality.