squamous cell carcinoma of the lung 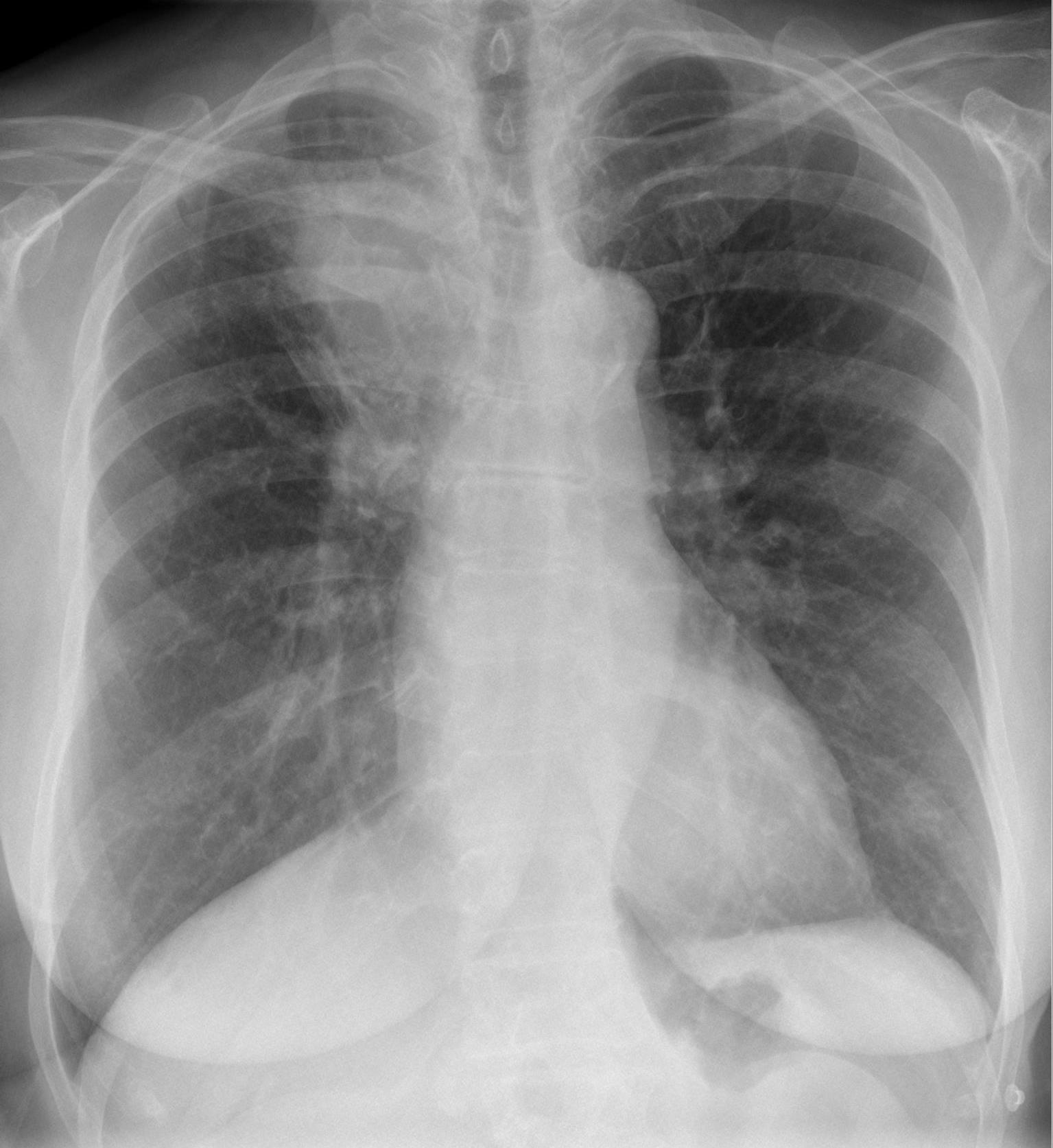 Squamous cell carcinoma accounts for ~30-35% of all lung cancers and in most instances are due to heavy smoking . Historically it was the most common type of lung cancer but in many countries has gradually declined over the past four decades with a rise in adenocarcinoma of the lung, which is now the most common in many series .

In general, squamous carcinomas are encountered more frequently in male smokers, and adenocarcinoma in female smokers, although these results vary from series to series .

Squamous cell carcinoma may be the commonest type accounting for Pancoast tumors.

Clinical presentation depends on the location of the tumor and is largely independent of histology.

Central tumors with invasion and obstruction of bronchi typically result in the distal collapse which may have superimposed infection. Chronic cough and hemoptysis may be present.

Although squamous cell carcinoma of the lung is traditionally known to arise centrally (66-90%), the incidence of peripherally located SCC is increasing .

Macroscopically these tumors tend to be off-white in color, arising from, and extending into a bronchus. They invade the surrounding lung parenchyma and can extend into the chest wall. Larger tumors have a tendency to undergo central necrosis .

Squamous cell carcinoma of the lung is characterized by intercellular bridging and/or keratinization of the individual cells or squamous pearls. These characteristics vary depending on the degree of differentiation with poorly differentiated form exhibiting the least remarkable features and greater mitotic activity.

SCC consistently express P63 and is negative for TTF1 . Other squamous immunomarkers include CK5/6 or 34BE12. Differentiation of SCC from adenocarcinoma is vital as a response to cytotoxic and biological agents will differ.

Most common sites of metastatic disease are :

While it is not possible to differentiate squamous cell lung cancer from other types of lung cancer on plain film, there are a few generic features that would raise suspicion of lung malignancy.

Lung cancer is relatively infrequently found on chest x-rays due to the combination of difficulty in visualizing small lesions and the fact that even when the lesion is objectively visible, it is not seen by the reporting radiologist. The diagnostic confidence is the greatest when the lesion is at least 8-10 mm .

The appearance depends on the location of the lesion. The more central lesions may merely appear as a bulky hilum, representing the tumor and local nodal involvement. Lobar collapse may be seen due to obstruction of a bronchus. When the right upper lobe is collapsed and a hilar mass is present, this is known as the Golden S sign.

A more peripheral location may appear as a rounded or spiculated mass. Cavitation may be seen as an air-fluid level. Chest wall invasion is difficult to identify on plain films unless there is the destruction of the adjacent rib or evidence of soft tissue growing into the soft tissues superficial to the ribs.

Pleural effusion may also be seen, and although it is associated with a poor prognosis, not all effusions are due to malignant involvement of the pleural space. Some are due to venous obstruction or represent a parapneumonic effusion .

CT is the modality of choice for the evaluation of possible lung cancer.

Certain morphological features can be suggestive of SCC, but these are by no means definitive, with significant overlap with other histological types. More importantly, cross-sectional imaging enables the staging of the disease and together with the histological grading and clinical performance status will dictate the prognosis and treatment.

Central SCC often results in intraluminal obstruction and causes lung collapse and/or obstructive pneumonitis. Peripheral SCC may be seen as a solid nodule/mass with or without an irregular border . The irregular margin can be attributed to a desmoplastic reaction or infiltrative growth . Similar to central lung cancer, peripheral cancer can also result in obstructive changes such as a mucocele.

Cavitation (some report as high as 82% ) is a frequent finding in primary lung SCC but can also be encountered in metastatic SCC. Cavitation is secondary to tumoral necrosis. In other instances, SCC can have a central scar with the peripheral growth of tumor.

When SCC presents as a peripheral solid nodule, follow-up is as per the Fleischner Society guidelines.

Classification of lung cancer into histological and immunohistochemical subtypes has a bearing on oncologic therapy. Survival is dependent on performance status at diagnosis and the stage of disease (see non-small cell lung cancer staging). Overall, stage for stage comparison of the survival rate for SCC is better than for adenocarcinoma . Differentiation between other NSCLC (adenocarcinoma/large cell lung cancer) and SCC is also paramount as a response to cytotoxic therapy differs. One such difference is the decreased efficacy of pemetrexed in SCC patients .

Different types of NSCLC respond differently to biological agents. High expression of EGFR in some SCC patients suggests benefit from cetuximab (monoclonal antibody against EGFR). However, lung SCC patients receiving bevacizumab (monoclonal antibody against VEGF) have a high incidence of pulmonary hemorrhage, thus it is only used for non-SCC NSCLC .

The differential diagnosis depends on the location and appearance of the mass.

Generic differentials for individuals features are as follows: