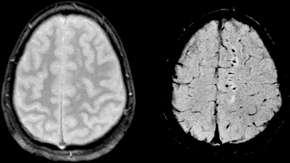 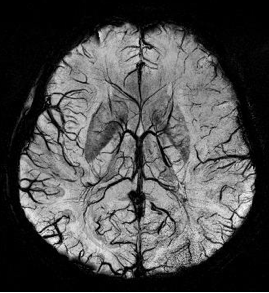 Susceptibility weighted imaging (SWI) is an MRI sequence that is particularly sensitive to compounds which distort the local magnetic field and as such make it useful in detecting blood products, calcium, etc.

SWI is a 3D high-spatial-resolution fully velocity corrected gradient-echo MRI sequence . Compounds that have paramagnetic, diamagnetic, and ferromagnetic properties all interact with the local magnetic field distorting it and thus altering the phase of local tissue which, in turn, results in loss of signal .

Following the acquisition, post-processing takes place which includes the application of a phase map to accentuate the directly observed signal loss .

Typically the images presented are:

The most common use of SWI is for the identification of small amounts of hemorrhage/blood products or calcium, both of which may be inapparent on other MRI sequences.

Distinguishing between calcification (made up primarily of calcium phosphate, but also containing very small amounts of copper (Cu), manganese (Mn), zinc (Zn), magnesium (Mg), and iron (Fe))  and blood products is not possible on the post-processed SWI images as both demonstrate signal drop out and blooming.

The filtered phase images are however able to (in most cases) distinguish between the two as diamagnetic and paramagnetic compounds will affect phase differently (i.e. veins/hemorrhage and calcification will appear of opposite signal intensity) .

Filtered phase images are not uniformly windowed or presented by all manufacturers and as such care must be taken to ensure correct interpretation. A simple step to make sure that you always view the images, in the same way, is to look at venous structures and make sure they are of low signal (if bright you should invert the greyscale). Then window the image narrowly such that the image appears a little reminiscent of a dark CT of the brain. Calcifications will now appear bright (white).

Although filtered phase images are probably more sensitive to minimal amounts of calcium than CT , they perform poorly and can be confusing when larger amounts of calcification or hemosiderin are present.  When the ﬁeld is large enough that the phase exceeds π (pi) radians, it will alias to -π radians and will now appear to be dark rather than bright . The net effect is that large regions of calcifications can have areas that appear dark, or be surrounded by dark regions. The converse is also seen in large areas of profound hemosiderin staining.