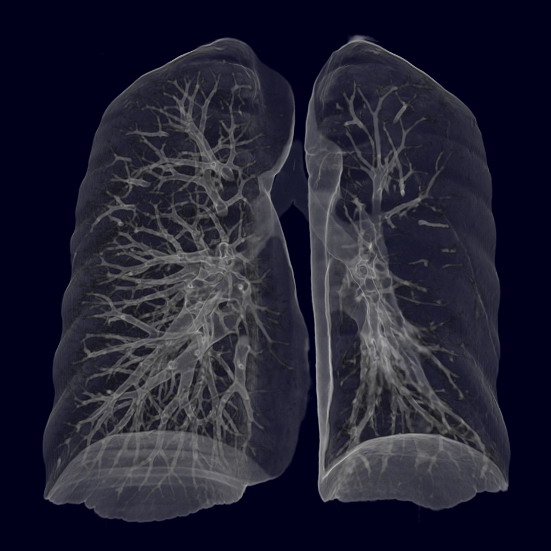 Swyer-James syndrome (SJS), also known as Swyer-James-MacLeod syndrome and Bret syndrome, is a rare lung condition that manifests as unilateral hemithorax lucency as a result of postinfectious obliterative bronchiolitis.

The condition typically follows a viral respiratory infection such as adenoviruses or Mycoplasma pneumoniae infection in infancy or early childhood . Non-infectious cause includes ingestion of hydrocarbon. It has an estimated prevalence of 0.01% .

It is generally characterized on radiographs by a unilateral small lung with hyperlucency and air trapping on expiration .

CT shows the affected lung as being hyperlucent with diminished vascularity. The disease can be unilateral or bilateral. The entire lung can be affected, however, there can also be lobar, segmental, and subsegmental involvement in a patchy distribution .  The size of the majority of the affected lobes is smaller, although occasionally they can be of normal size . There is usually no anteroposterior gradient attenuation . Bronchiectasis may be present, although this is not a universal finding .

MR angiography (MRA) may show a small pulmonary artery with diminished vascularity in the periphery .

Treatment is conservative and preventative, focused primarily on controlling pulmonary infections. Inhaled corticosteroids may have a limited role in treatment .

The condition was first described in Canada in the 1950s by:

It has also been referred to as MacLeod syndrome, but this is not advised given the presence of a rare genetic malformation bearing a similar name: McLeod syndrome. It was also described by J Bret in France, hence reference to the same condition as Janus syndrome and Bret syndrome.

One should also consider other causes of a unilateral hypertranslucent hemithorax.