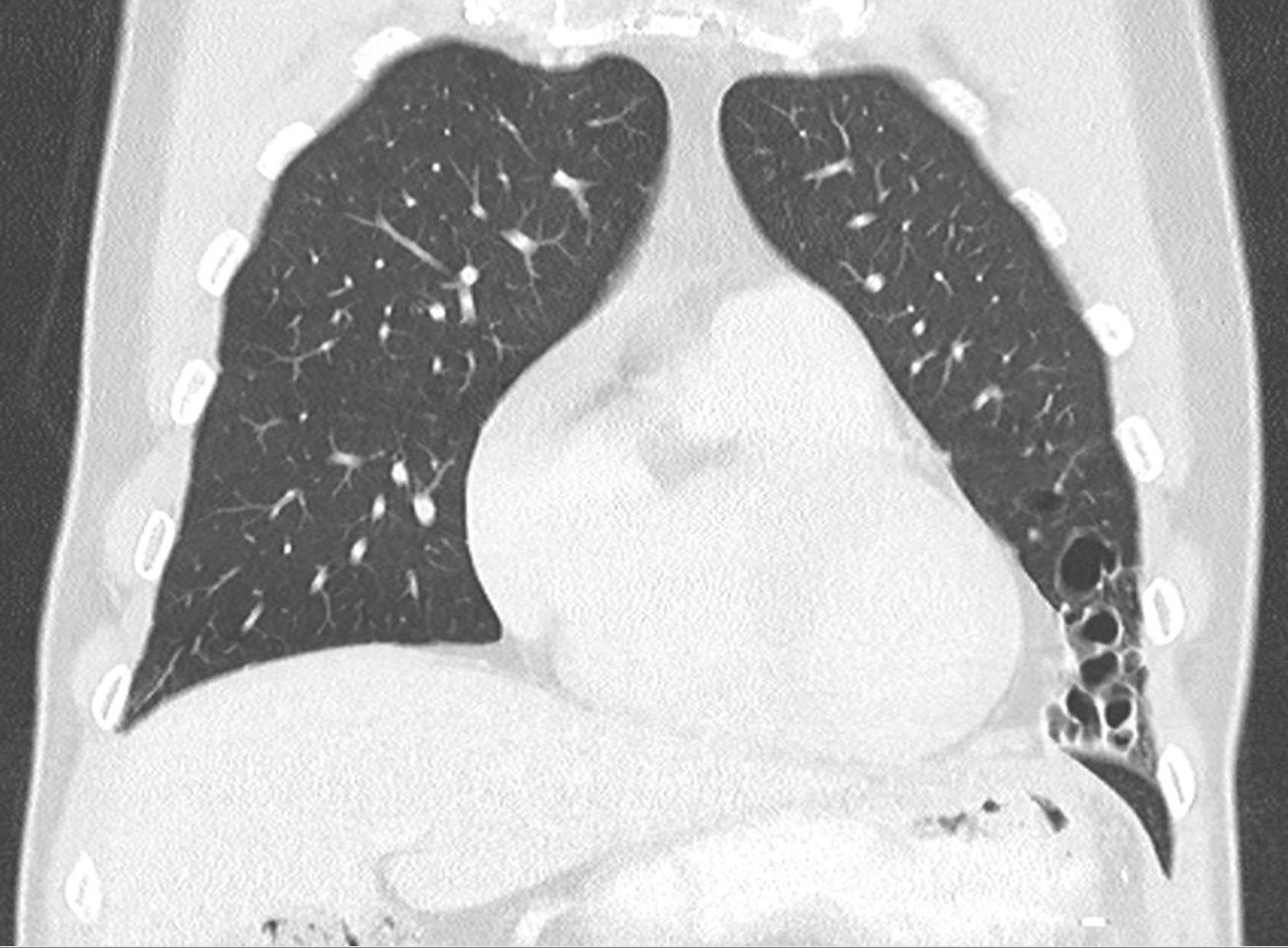 Computed
tomography of the lung with thin slices (1 mm) showing bronchiectasis in the lower lung lobes of a subject with type ZZ alpha-1-antitrypsin deficiency. There are no signs of emphysema.
Wikipedia • CC BY 2.0

Bronchiectasis (plural: bronchiectases) is defined as an irreversible abnormal dilatation of the bronchial tree. It has a variety of underlying causes, with a common etiology of chronic inflammation. High-resolution CT is the most accurate modality for diagnosis.

As there are many causes of bronchiectasis, which may occur at essentially any age, no single demographic is particularly involved. Two groups make up the majority of cases: post-infectious and cystic fibrosis .

Bronchiectasis is the common response of bronchi to a combination of inflammation and obstruction/impaired clearance. Causes include :

A mnemonic to remember common causes is CAPT Kangaroo has Mounier-Kuhn.

According to macroscopic morphology, three types have been described, which also represent a spectrum of severity :

According to one study, the relative prevalence of bronchiectatic changes were:

There is dilation of bronchi and bronchioles due to elastic tissue and smooth muscle destruction.

CT and HRCT especially excel at demonstrating the airways and is able to a greater or lesser degree to distinguish some of the various underlying causes.

A number of features are helpful in diagnosing bronchiectasis :

A number of ancillary findings are also recognized:

Signs described on CT include:

In general, the treatment of bronchiectasis is medical and involves promoting sputum clearance, using positional physiotherapy, and early and aggressive treatment of pulmonary infections. In some cases, chronic prophylactic administration of antibiotics may be required.

In cases where bronchiectasis is severe and significant morbidity is present, surgical resection of the affected lobe may be of the benefit provided adequate respiratory reserve exists.

In cases where both lungs are extensively involved (e.g. cystic fibrosis) lung transplantation can be considered .

The differential is in two parts:

Causes of a particular distribution of bronchiectasis

Conditions that may mimic cystic bronchiectasis include :