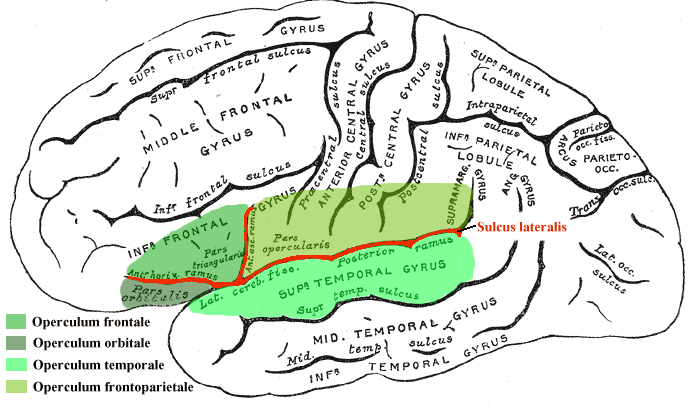 The Sylvian fissure, also known as the lateral sulcus or fissure, separates the frontal and parietal lobes superiorly from the temporal lobe inferiorly. The insular cortex is located immediately deep to the Sylvian fissure.

Anteriorly the fissure courses medially to form the 'stem' of the lateral fissure, also known as the Sylvian cistern, into which passes the middle cerebral artery and its major branches. Laterally, it has two branches or 'rami' which extend into, and divide, the frontal operculum.

The lateral sulcus terminates posteriorly in a bifurcation, with the posterior ascending ramus lying within the supramarginal gyrus of the inferior parietal lobule.

Superiorly the lateral sulcus may be termed the circular sulcus, surrounding the insular cortex medially.

The Sylvian fissure is named for Franciscus Sylvius (1614-1672), German/Dutch physician and anatomist, who described it as the "fissura cerebri lateralis Sylvii" .