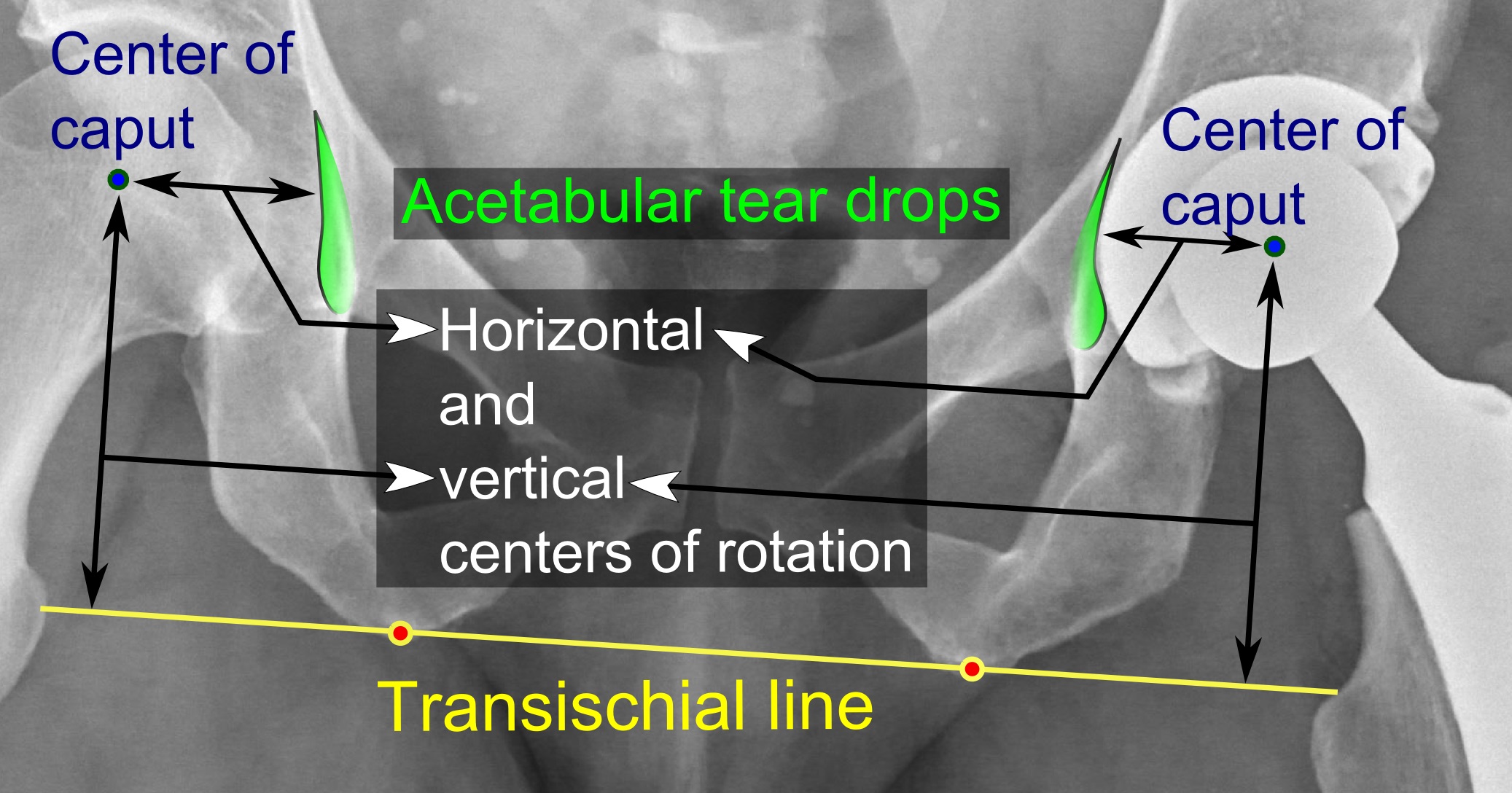 Projectional
radiograph of hips after hip replacement, showing calculations of the center of rotation.
Wikipedia • CC0

Total hip arthroplasty (THA) or total hip replacement (THR) is an orthopedic procedure that involves the surgical excision of the femoral head and cartilage of the acetabulum and replacement of the joint with articulating femoral and acetabular components. It is a commonly performed procedure usually with very good results and return to function.

Most common surgical approach for total hip arthroplasty is a posterior approach to the hip. Skin incision is made 10-15 cm centered on the posterior aspect of the greater trochanter. Dissection includes splitting fascia lata and gluteus maximus in line with its fibers. This will uncover the short external rotators, which are dissected off the femur and retracted back over the sciatic nerve to protect the nerve throughout the operation. A capsulotomy is then performed and the hip dislocated.

Bearing surfaces are the surfaces which articulate in the prosthetic joint. The femoral head and the acetabular liner can be used in different combinations. These will give different appearance on radiograph depending on the configuration. Options for bearing surfaces include:

Femoral component or stem: this refers to the prosthesis which is implanted into the femur. They can be described by length, taper, and presence of a collar. Attached to the femoral component is the neck and head which in most prostheses can be altered in size to create a stable joint.

Stability of the prosthetic joint is the primary goal in choosing the position of implanted prosthesis. Multiple patient and surgical factors can alter the ideal position of the components.

The overall position of the prosthetic hip replacement should ideally be in a mild degree of valgus, but should not exceed 140°. Excessive valgus creates strain on the knee, can lengthen the leg, and can lead to superior dislocation with adduction of the leg. A hip positioned in varus can cause increased loosening and stem failure and can also lead to dislocation.

Femoral stem fixation can be either cemented or non-cemented (biological) fixation. There is a tendency to use non-cemented femoral stems in younger patients, due to higher reported rates of loosening of cemented stems in long term followup.  Most common fixation for the acetabular component is non-cemented.

Biologic fixation uses either porous coated metallic surface to stimulate bone in growth or grit-blasted surface to allow bone on growth. The prosthesis can also be coated in hydroxyapatite, which is an osteoconductive agent.

Grading of cement technique on radiograph for femoral stem

Gruen zones are around the femoral stem from zone 1-7 from the proximal lateral aspect counterclockwise with zone 4 distal to the tip.

Charnley zones are around the acetabular component. There are 3 zones indicating the superior, middle, and inferior third of the acetabulum.

When the prosthesis fails, a revision THA is performed which involves removing the primary components. This may involve osteotomy of the femur, which requires internal fixation. There are many options for revision prosthesis including longer femoral stem.