developmental dysplasia of the hip

Measurement
of Reimer"s migration index, which can be used to indicate hip dislocation.
Wikipedia • CC0 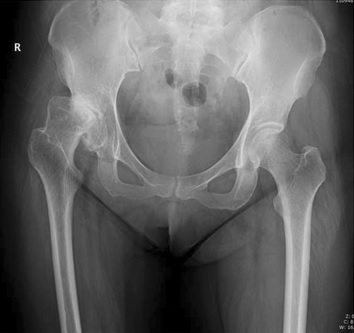 Pre-operative
radiographic aspect in an anteroposterior view of a 40-year-old female with Crowe grade II hip dysplasia on her right side. The patient presented with a narrow femoral canal.
Wikipedia • CC BY 4.0

X-ray of
measurements in hip dysplasia.
Wikipedia • CC BY 4.0

Developmental dysplasia of the hip (DDH), or in older texts congenital dislocation of the hip (CDH), denotes aberrant development of the hip joint and results from an abnormal relationship of the femoral head to the acetabulum.

Unlike CDH, developmental dysplasia of the hip is not confined to congenital malformations and includes perturbations in development . There is a clear female predominance, and it usually occurs from ligamentous laxity and abnormal position in utero. Therefore, it is more common with oligohydramniotic pregnancies. This article describes the commonly used radiographic measurements and lines involved in DDH.

The reported incidence of developmental dysplasia of the hip varies between 1.5 and 20 per 1000 births , with the majority (60-80%) of abnormal hips resolving spontaneously within 2-8 weeks (so-called immature hip).

Developmental dysplasia of the hip is usually suspected in the early neonatal period due to the widespread adoption of clinical examination (including the Ortolani test, Barlow maneuvers, and Galeazzi sign). The diagnosis is then usually confirmed with ultrasound, although the role of ultrasound in screening is controversial .

In general, the dysplastic hip has a ridge (neolimbus) in the superolateral region of the acetabulum composed hypertrophied fibrocartilage as a result of the abnormal joint congruity . In addition, there is very cellular hyaline cartilage allowing the femoral head to glide out of the acetabulum generating the palpable clunk known as the Ortolani sign .

For imaging assessment of developmental dysplasia of the hip, ultrasound is the modality of choice prior to the ossification of the proximal femoral epiphysis. Once there is a significant ossification then an x-ray examination is required.

For some reason, the left hip is said to be more frequently affected . One-third of cases are affected bilaterally .

Ultrasound is the test of choice in the infant (<6 months) as the proximal femoral epiphysis has not yet significantly ossified. Additionally, it has the advantage of being a real-time dynamic examination allowing the stability of the hip to be assessed with stress views.

Some values are used to 'objectively' assess morphology.

The alpha angle is formed by the acetabular roof to the vertical cortex of the ilium. This is similar measurement as that of the acetabular angle (see below). The normal value is greater than or equal to 60º.

The beta angle is formed by the vertical cortex of the ilium and the triangular labral fibrocartilage (echogenic triangle). The normal value is less than 77º  but is only useful in assessing immature hips when combined with the alpha angle.

The percentage of the femoral epiphysis covered by the acetabular roof. A value of >50% is considered normal .

The Hilgenreiner line is drawn horizontally through the inferior aspect of both triradiate cartilages. It should be horizontal but is mainly used as a reference for the Perkin line and measurement of the acetabular angle.

The acetabular angle is formed by the intersection between a line drawn tangential to the acetabular roof and Hilgenreiner line, forming an acute angle. It should be approximately 30° at birth and progressively reduce with the maturation of the joint.