Undifferentiated embryonal sarcoma of the liver 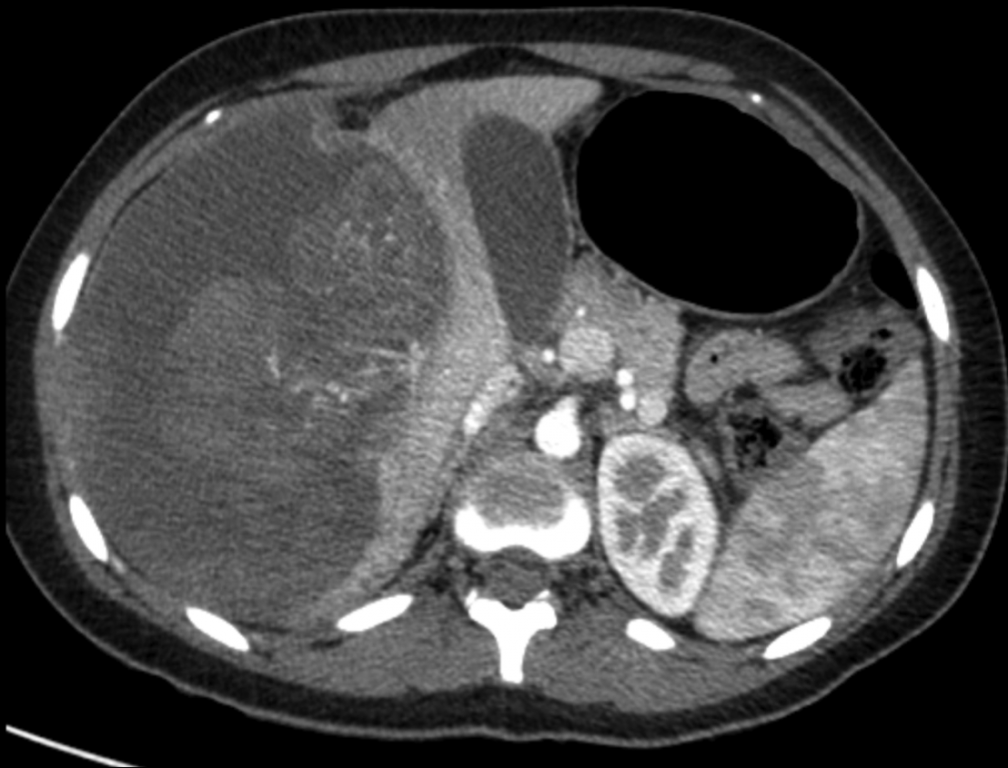 Undifferentiated embryonal sarcomas of the liver are rare, aggressive, and malignant liver tumors encountered in the pediatric population.

Approximately 90% of cases occur in patients under 15 years of age, most commonly between 6 and 10 years of age, but some cases have been reported in adults . There is a slight male predominance, but no racial predilection .

Although it is a rare tumor, the undifferentiated embryonal sarcoma of the liver is considered by some studies as the third most common liver primary malignancy of childhood, after hepatoblastoma and hepatocellular carcinoma .

It usually manifests as a large abdominal mass, with or without abdominal pain or discomfort . Additional clinical features include fever, weight loss, lethargy and respiratory distress . Acute onset of symptoms are reported in cases of rupture, but this is uncommon .

Some authors have considered this as the malignant counterpart of the hepatic mesenchymal hamartoma, because there have been reports of malignant transformation of those benign tumors; however, there is currently no strong evidence to support that hypothesis .

About 75% of cases occur in the right lobe of the liver . Metastases, when seen, are most frequently found in the lungs, pleura, peritoneum and bone .

This tumor is usually a single and well-circumscribed lesion, with a large size (often >10 cm), and has both cystic and solid elements . Cross-section specimens of the tumor show a grey-white heterogeneous appearance, with areas of hemorrhage and necrosis, as well as gelatinous areas due to myxoid matrix .

A fibrous pseudocapsule separates the lesion from the surrounding parenchyma . Clusters of hepatocytes are seen at the margins of the tumor, including within the pseudocapsule . The solid component is made up of spindle-like cells with ill-defined borders, and overall, has a sarcomatous appearance . Mitotic figures are very frequently seen, as well as eosinophilic globules in the cytoplasm ad hyperchromatic multiple nuclei .

A large mass located in the right lobe of the liver in a pediatric patient under 15 years should raise the suspicion of an undifferentiated embryonal sarcoma of the liver, especially if it has a significant necrotic or cystic component and the patient has normal AFP levels . Vascular characteristics are non-specific, and range from hypo- to hypervascular.

A plain radiograph is usually of limited use but may show a large non-calcified abdominal mass at the level of the liver .

CT is often not sensitive enough to detect the regions of hemorrhage within the tumor .

The tumor itself has the following signal characteristics :

The surrounding pseudocapsule has the following signal characteristics :

Treatment consists of complete tumor resection with a chemotherapy regimen .

Although prognosis was once quite poor, with the aid of new multimodal treatment the survival rates are improving, with most of the cases currently considered curable .