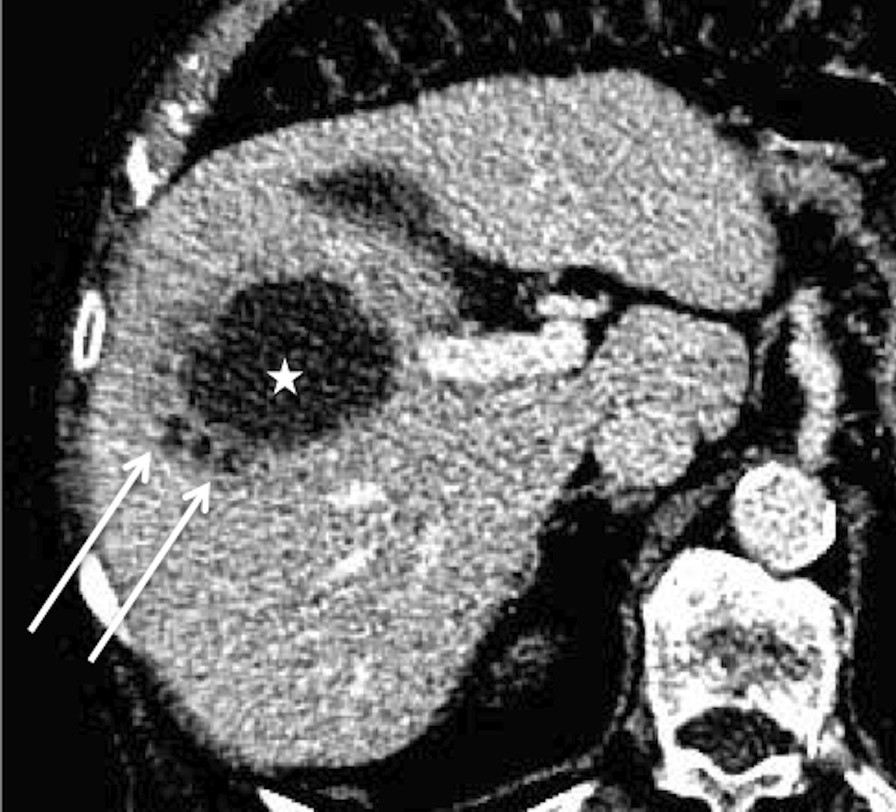 Cystic liver
lesions: a pictorial review. Hepatic pyogenic abscesses in a 49-year-old male. a Ultrasonography shows a large heterogeneous hypoechoic lesion, with anechoic parts (star) and increased through transmission (arrows) confirming its cystic nature. b and c Axial computed tomography on portal venous phase displays multiple abscesses appearing as cystic masses, with a specific sign: the double target (arrows). Note the bubble of gas in one of them (arrow-head)
insightsimaging.springeropen.com • CC-by-4.0 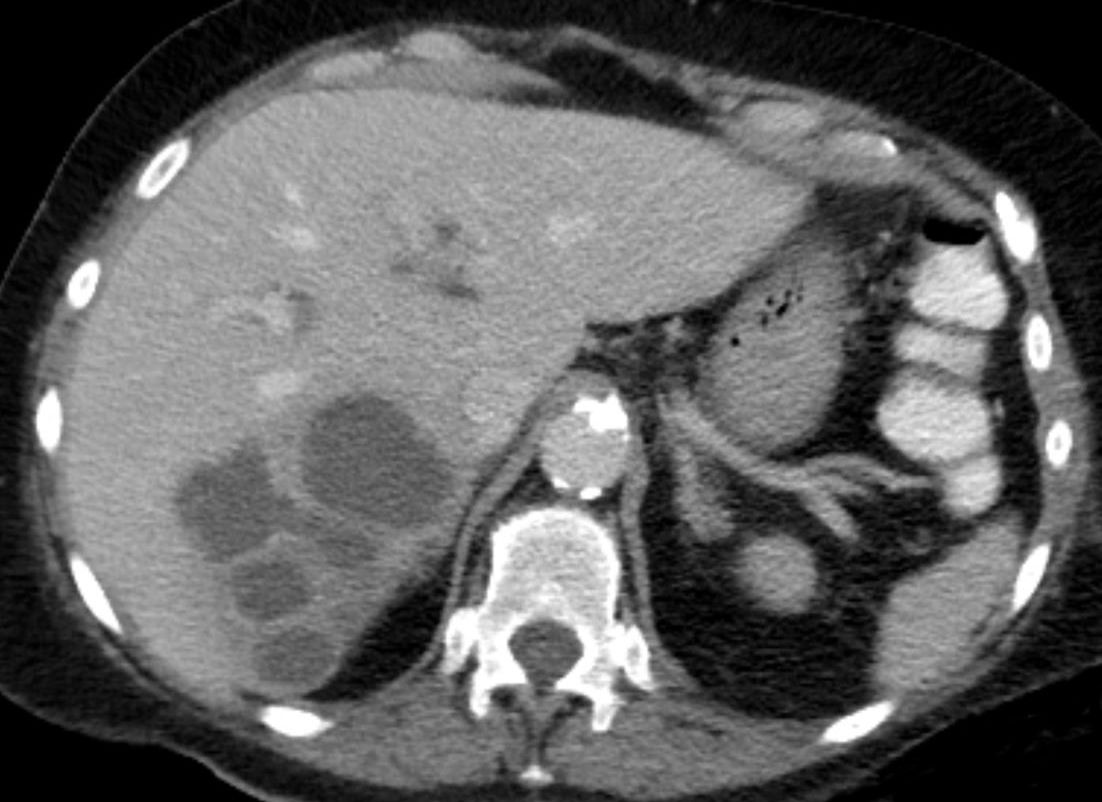 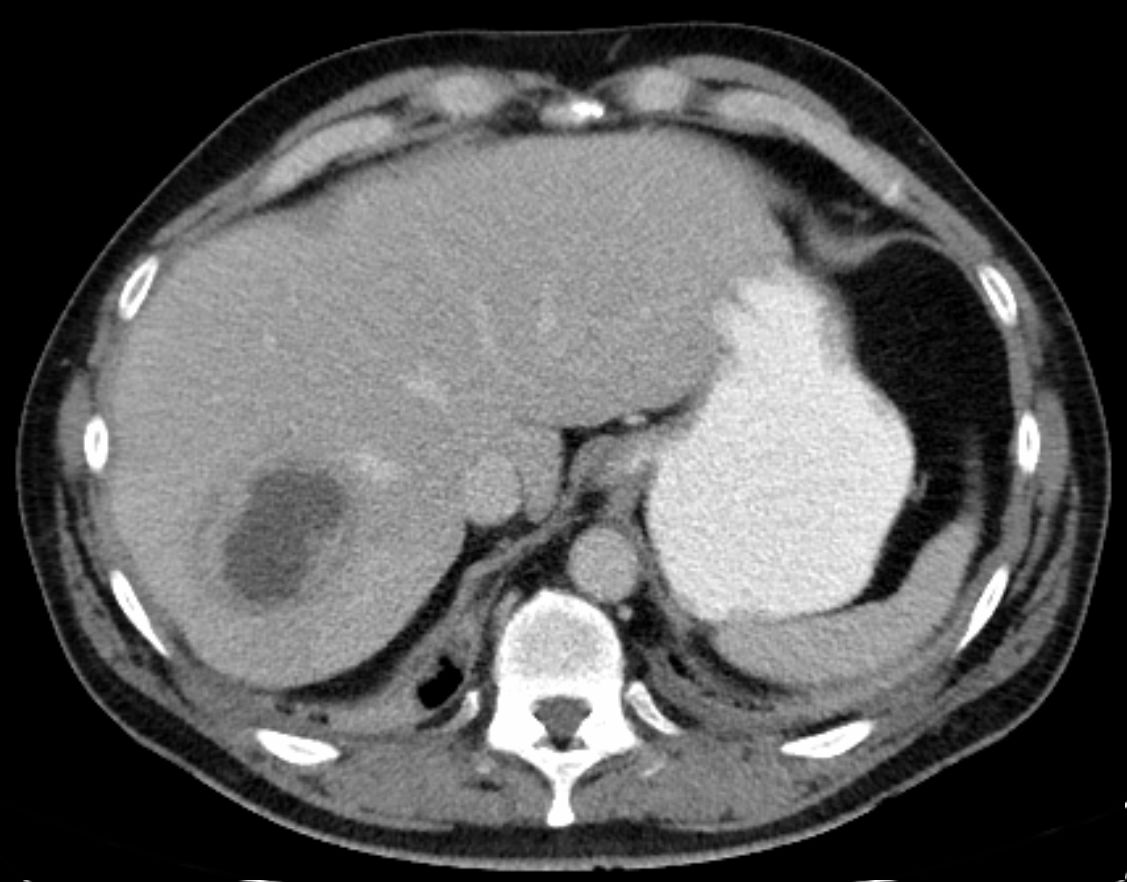 Contrast CT
of an abscess and transient hepatic attenuation differences (THAD). From top to bottom: en:CT scan without contrast in the axial plane shows a well-defined multilocular, hypodense abscess in the right hepatic lobe (segment VII and VIII) and in the medial segment of the left lobe (IV b). Contrast CT in the arterial phase shows regional attenuation difference is noted in left lobe adjacent to left hepatic lobe abscess (white arrow) with a subtle increase in density (a transient hepatic attenuation differences, or THAD). Portal phase: Axial- shows that the previously noted THAD in left lobe adjacent to abscess has become isodense with rest of the liver (white arrow). Delayed phase: Again, the THAD continues to be isodense with rest of the liver (white arrow).
Wikipedia • CC BY 4.0

Large liver
abscess presumed to be the result of appendicitis
Wikipedia • CC BY-SA 4.0 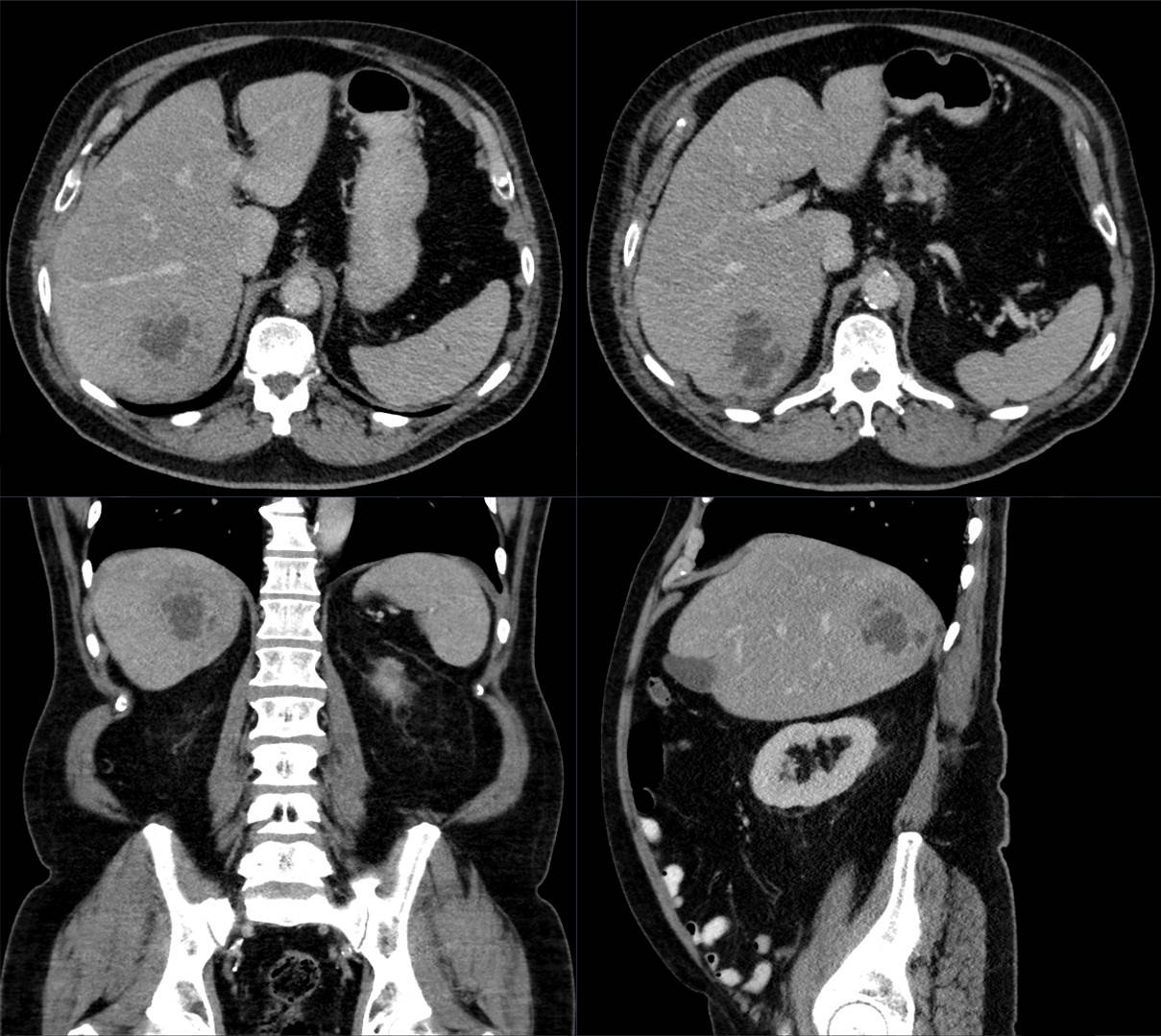 Contrast-enhanced
ultrasound of an abscess in the liver.
Wikipedia • CC BY 3.0 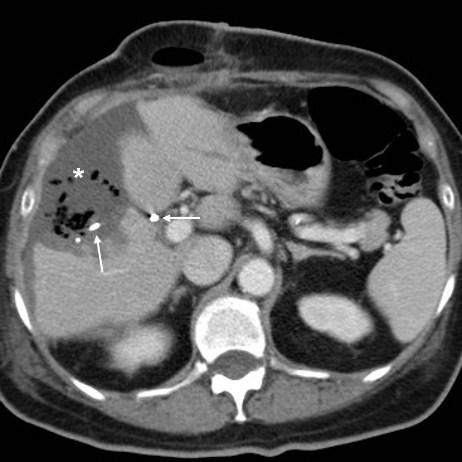 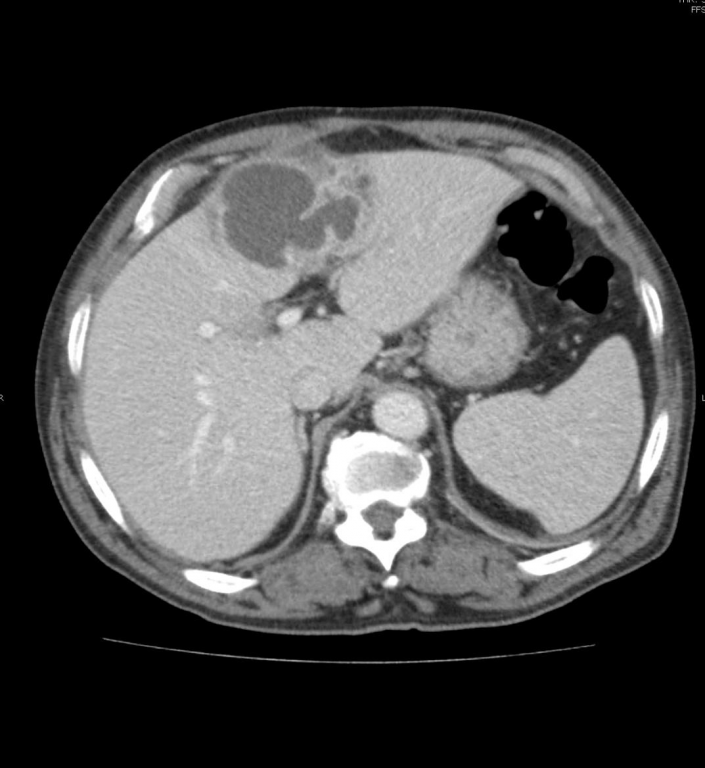 Migrated
toothpick as cause of liver abscess. Axial image shows a large hypodense lesion in the IV hepatic segment, with lobulated margins and peripheral enhancement; a thin ring of low-attenuation is present in the hepatic parenchyma surrounding the mass.
www.eurorad.org • CC by-nc-sa-4.0 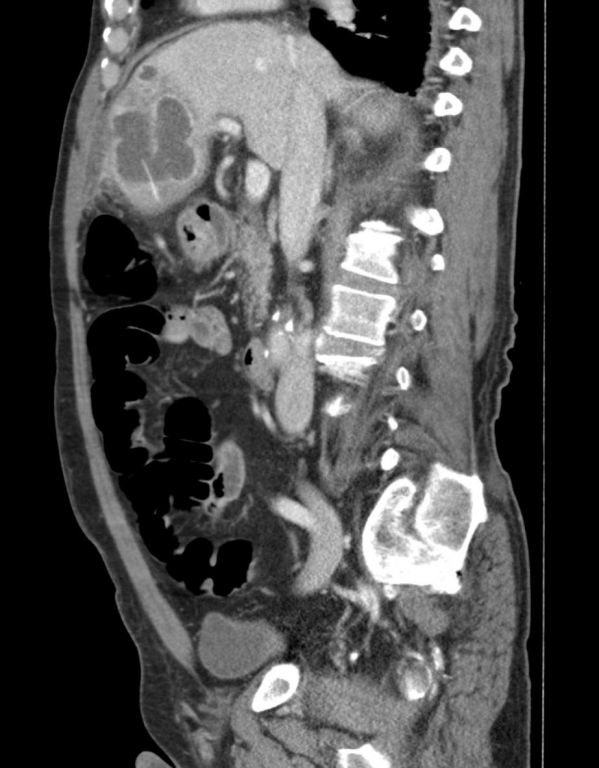 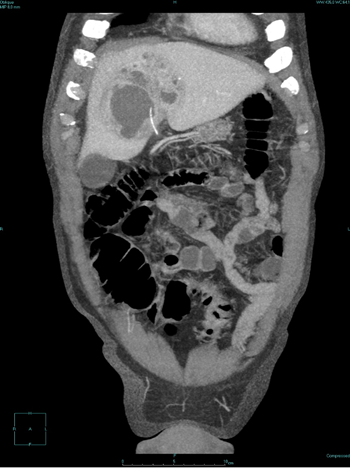 The frequency of individual infective agents as causes of liver abscesses are intimately linked to the demographics of the affected population:

In developed countries, bacterial abscesses are most common, usually in the setting of comorbidities such as:

The typical presentation is one of right upper quadrant pain, fever, and jaundice. Anorexia, malaise and weight loss are also frequently seen. Depending on the immune status of the patient, and the organism involved, the presentation may be dramatic or insidious.

Hepatic abscesses can occur via different routes such as :

Most abscesses in this setting are polymicrobial, with the most common bacterial agents being :

Parasitic abscess in patients from developing countries include:

When the infection spreads to the liver through the portal veins it arises more commonly in the right lobe, probably due to an unequal distribution of superior and inferior mesenteric vein contents within the portal venous distribution.

A plain abdominal radiograph is not sensitive for evaluating liver abscesses. Indirect signs visible include:

Liver abscesses are typically poorly demarcated with a variable appearance, ranging from predominantly hypoechoic (with some internal echoes) to hyperechoic. Gas bubbles may also be seen . Color Doppler will demonstrate the absence of central perfusion.

Contrast-enhanced ultrasound shows wall enhancement during arterial phase and progressive washout during portal or late phases. The liquefied necrotic area does not enhance. The use of contrast allows one to characterize the lesion, measure the size of the necrotic area, and depict internal septations for management purposes. In small abscesses (under 3 cm) and in highly septated abscesses, drainage is not recommended.

In patients with monomicrobial K. pneumoniae abscesses, the lesion may appear solid and mimic a hepatic tumor .

As with other modalities, the appearance of liver abscesses on CT is variable. In general, they appear as peripherally enhancing, centrally hypoattenuating lesions . Occasionally they appear solid or contain gas (which is seen in ~20% of cases ). The gas may be in the form of bubbles or air-fluid levels . Segmental, wedge-shaped or circumferential perfusion abnormalities, with early enhancement, may be seen .

The "double target sign" is a characteristic imaging feature of hepatic abscess demonstrated on contrast-enhanced CT scans, in which a central low attenuation lesion (fluid-filled) is surrounded by a high attenuation inner rim and a low attenuation outer ring . The inner ring (abscess membrane) demonstrates early contrast enhancement which persists on delayed images, in contrast to the outer rim (edema of the liver parenchyma) which only enhances the delayed phase .

The "cluster sign" is a feature of pyogenic hepatic abscesses . It is an aggregation of multiple low attenuation liver lesions in a localized area to form a solitary larger abscess cavity.

Medical antimicrobial therapy is required in all cases and sometimes suffices if abscesses are small.

Radiology has a major role to play in the percutaneous drainage of hepatic abscesses, which can be performed either under ultrasound or CT guidance.

Surgery is limited to those patients where percutaneous drainage is impossible or has proven ineffective. Additionally, the source of the abscess may require surgical treatment at which time the abscess may also be drained.

Prognosis is highly variable, depending not only on the organism involved and size of the abscess but also on the comorbidities present. Figures range from 9-80% .