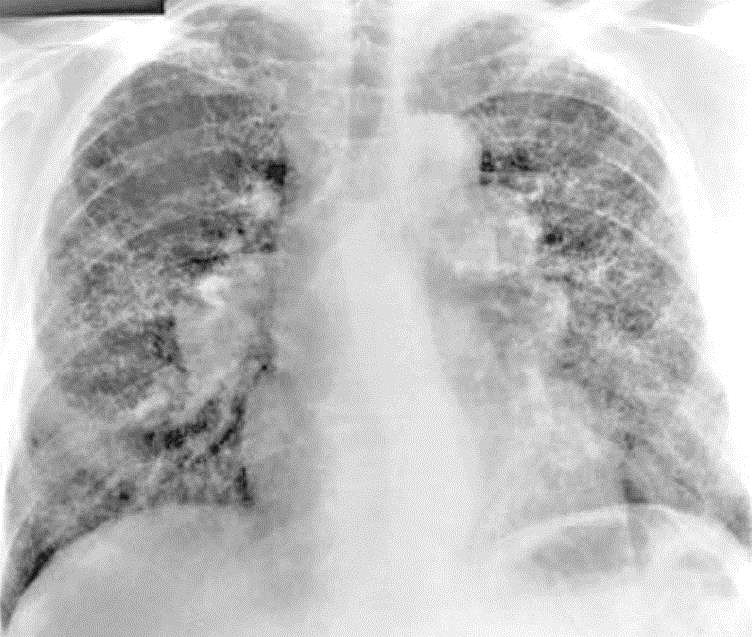 Chronic beryllium lung disease (CBD) or sometimes just simply known as berylliosis refers to lung changes that can be seen with prolonged exposure to beryllium which is an alkaline earth metal that is used in many different industrial applications.

It is reported to occur in 2-5% of beryllium-exposed individuals.

It is characterized by the development of granulomatous inflammation secondary to a cell-mediated immune response to beryllium.

While it is a multisystem granulomatous disease, it predominantly involves the lungs.

It is sometimes classified as a form of fibrotic pneumoconiosis as well as a type of pulmonary granulomatous disease. Although some authors describe this to represent a hypersensitivity disorder rather than a true pneumoconiosis .

The following criteria need to be present for a definitive diagnosis:

Its imaging features are said to be indistinguishable from pulmonary sarcoidosis .

Reported CT findings have been shown to be variable and non-specific and include:

Mediastinal and hilar lymphadenopathy may also be present in a proportion of cases. In certain situations, ground glass changes may also be seen .

While there is no cure, commonly adopted management options involve cessation of beryllium exposure and use of systemic corticosteroids .  Early treatment with corticosteroids may lead to disease regression and prevent further progression. If fibrosis has developed, the lung damage is irreversible.

It was first described in 1946 by HL Hardy and IR Tabershaw.

Radiographic and pathologic features are indistinguishable from pulmonary sarcoidosis . It may also not be possible to differentiate from other pneumoconioses.