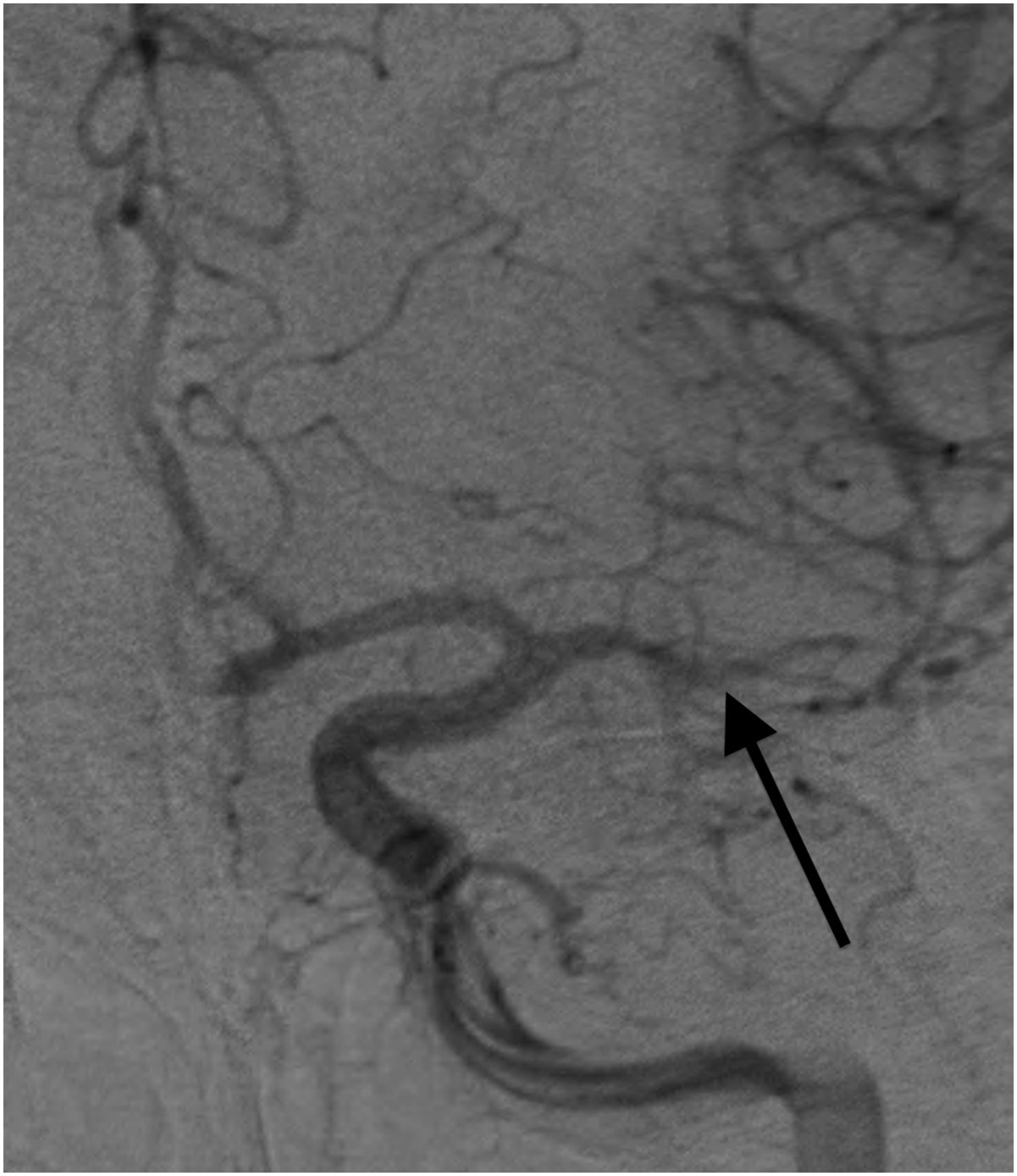 Cerebral vasospasm following subarachnoid hemorrhage is a major complication of subarachnoid hemorrhage (SAH). It is overtaking rebleed as the major cause of mortality and morbidity in the subgroup of patients with SAH who reach the hospital and receive medical care. It usually occurs after a few days from the onset of hemorrhage and peaks in severity at day 4-7.

It is seen in 40-70% of SAH patients on vascular imaging, and becomes clinically apparent in 20-30% of patients, typically from the 4 to 10 day post bleed .

About half of the symptomatic patients will show severe permanent neurological deficits or die .

After decades of research the exact mechanism(s) responsible remains elusive although a number of candidate agents are demonstrated to play a role. These include:

Most likely the 'true' pathway involves multiple agents interacting with each other, both biochemically and via changes in gene expression, accounting for the delay of onset.

Oxyhemoglobin, highest in concentration in arterial blood, appears to simultaneously up-regulate the expression of endothelin 1 (ET-1) and reduce the efficacy of NO.

This results in alteration of normal vascular tone, resulting in narrowing of the large vessels. Increasingly it is also becoming apparent that small caliber vessels which are in contact with blood in CSF are also narrowed - down to 15 micrometers -  far too small to be visible on angiography, let alone CTA/MRA.

The result, if severe enough, is to reduce perfusion of brain parenchyma resulting in ischemic symptoms, infarction, and its sequelae.

The degree of vasospasm is difficult to predict but correlates with the original Fisher scale and more accurately with the modified Fisher scale. Hence Its likelihood and severity is associated with the amount of blood.

Vasospasm associated with subarachnoid hemorrhage is usually characterized by diffuse narrowing without intervening regions of normal vessel caliber . It is often centered at the arterial bifurcation , giving the appearance of enlargement of the said bifurcation.

Transcranial doppler (TCD) is used as a screening modality for vasospasm after SAH; it relies on the use of pulsed wave Doppler to determine the velocity of blood flow in the middle cerebral artery (MCA). The following have been suggested to be supportive of the presence of vasospasm in a suggestive clinical context :

Furthermore, TCD may be used to differentiate increased flow due to circulatory hyperdynamic states using the Lindegaard ratio, which is calculated by taking the product of the MCA and ipsilateral internal carotid artery mean flow velocities. Ratios over 3.0 are suggestive that vasospasm is responsible for the elevated flow velocity.

Aggressive, early and prophylactic treatment can markedly reduce the incidence of vasospasm but often requires early securing of the ruptured aneurysm. Three main modalities are employed:

In severe cases, intra-arterial therapy can be beneficial. Intra-arterial delivery of a calcium channel blocker such as nimodipine or verapamil has replaced previously used drugs such as papaverine. They are administered by slow bolus injection into the relevant vascular territory via a standard diagnostic catheter, with careful monitoring of blood pressure. Treatment may need to be repeated daily for 3-5 days.

Balloon angioplasty is a more invasive neurointerventional technique requiring a guiding catheter and placement of an endovascular microballoon over a guidewire across the affected segment. Expanding the balloon disrupts the smooth muscle fibers within the vessel wall. There is a risk of vessel dissection or rupture. Once treated the spasm does not usually recur.

Other experimental treatments include: