cholesterol polyp of the gallbladder 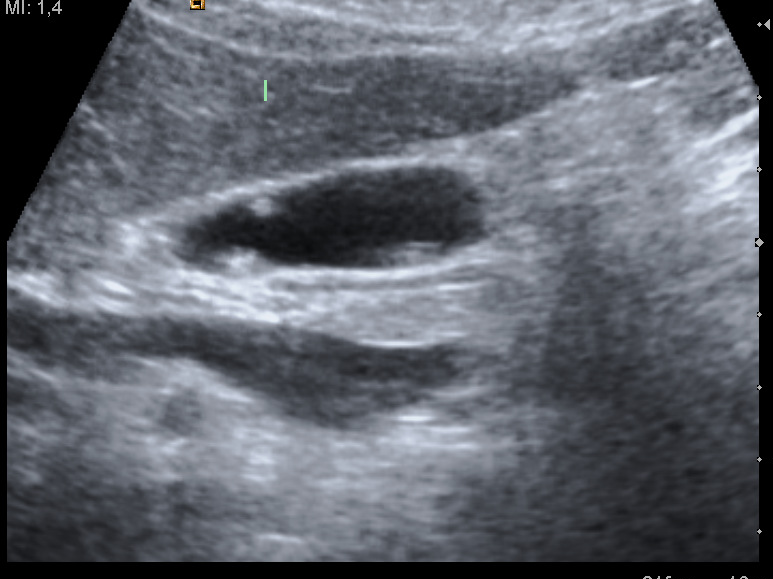 Gallbladder polyps are elevated lesions on the mucosal surface of the gallbladder. The vast majority are benign, but malignant forms are seen.

On imaging, although they may be detected by CT or MRI, they are usually best characterized on ultrasound as a non-shadowing and immobile polypoid ingrowth into gallbladder lumen.

Gallbladder polyps are relatively frequent, seen in up to 9% of the population . Over 90% are benign, and the majority are cholesterol polyps.

Cholesterol polyps are most frequently identified in patients between 40-50 years of age and are more common in women (F:M, 2.9:1) .

A wide variety of entities appear as polyps and histology is variable:

Patients with Peutz-Jeghers syndrome have an increased prevalence of adenomas within the gallbladder.

In most instances, predicting histology based purely on imaging is not possible, with the possible exception of cholesterol polyps in some instances (see below), and thus features that are predictive of benign vs malignant disease should be noted (see benign vs malignant features of gallbladder polyps) .

Overall size is probably the most useful indicator of malignancy, with polyps over 10 mm in diameter having a reported malignancy rate of 37-88% .

Ultrasound is the best initial imaging choice and is often able to separate cholesterol polyps from those requiring treatment. General features of gallbladder polyps are a non-shadowing polypoid ingrowth into gallbladder lumen, which is usually immobile unless there is a relatively long pedunculated component.

General features of polyps include :

Adenomas, on the other hand, tend to be larger, solitary, more often sessile with internal vascularity, and of intermediate echogenicity. It is impossible to confidently distinguish an adenoma from an adenocarcinoma .

Rarely, endoscopic ultrasound may be useful to further assess gallbladder polyps as it may generate higher resolution images .

Some publications have suggested a useful role in high resolution ultrasound (HRUS) for categorization of gallbladder polyps with features favoring a neoplastic polyps from benign comprising of :

According to the White Paper of the ACR Incidental Findings Committee II on Gallbladder and Biliary Findings (2013) :

Lower thresholds for follow up or intervention may be warranted if the patient population is known to have a higher risk of gallbladder carcinoma (e.g. higher incidences in Pakistan, Ecuador, and females in India).

The differential for a gallbladder polyp is limited, and includes :