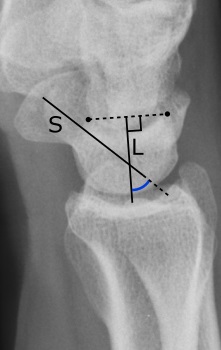 On an AP view, the normal trapezoidal configuration of the scaphoid may be lost and it may appear triangular.

On the lateral radiograph with the wrist in a neutral position, DISI typically demonstrates dorsal tilt of the lunate with both of the following present:

On sagittal CT, the same findings as on plain radiograph are seen.

On sagittal MRI , the same findings as on plain radiograph are seen. However, bone contusion, scaphoid avascular necrosis and scapholunate ligament injury are evaluated with more precision.