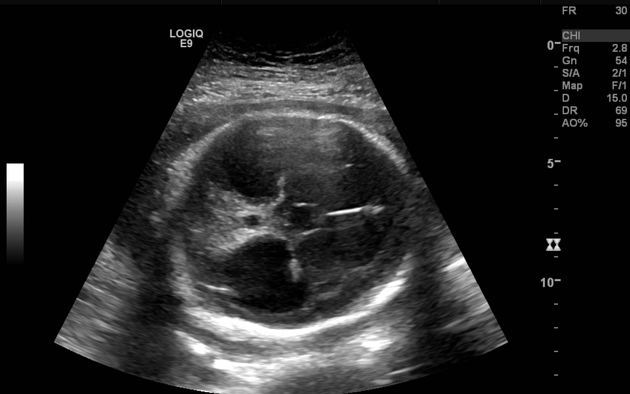 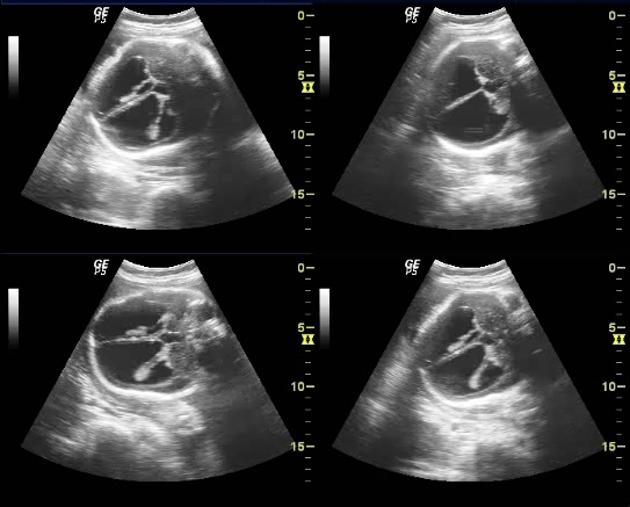 Fetal ventriculomegaly refers to the presence of dilated cerebral ventricles in utero.

Important in itself, it is also associated with other CNS anomalies.

Using the current sonographic cut-off criteria (see radiographic features below), the estimated prevalence may be at ~0.9% of all pregnancies . There may be a slightly increased male predilection.

While many fetuses with mild ventriculomegaly have a normal outcome, there are also a large number of congenital syndromes associated with enlarged ventricles.

Ultrasound is the screening modality of choice for initial evaluation .

Fetal ventriculomegaly is defined as:

The severity of ventriculomegaly can be further classified as :

When ventriculomegaly is pronounced, the choroid plexus will no longer lie in an almost parallel fashion against the lateral ventricular wall. Tethered at the foramen of Monro the free hanging choroid will "hang down" and appear to "dangle" within the dilated ventricle. This appearance is often termed the dangling choroid sign. The ventricle to cerebral hemisphere ratio would also increase as a result.

MRI may be useful for evaluation of additional anomalies.

Significance when detected on ultrasound

Even when noted without an associated structural anomaly, mild fetal ventriculomegaly is often considered a soft antenatal marker for underlying chromosomal abnormalities. Therefore, a careful search for other sonographic abnormalities is recommended.

Careful ultrasound evaluation of the posterior fossa is also critical to look for a potential cause of obstructive hydrocephalus.

Borderline to mild prenatally detected ventriculomegaly, without additional abnormalities or an abnormal karyotype, the majority of children have been to reported to have a normal development .

The prognosis, as well as management, largely depend on the etiology and on the presence of associated abnormalities.