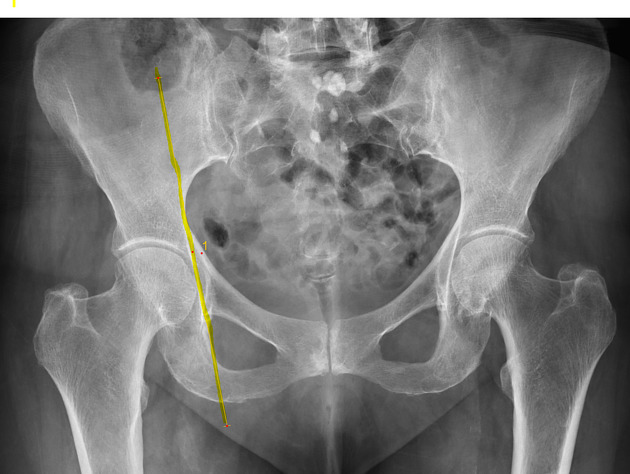 The ilioischial line, also known as the Köhler line, is a radiologic feature seen in the AP pelvis view and serves to assess the posterior acetabular column .

The ilioischial line takes its course along the lateral border of the obturator foramen to the medial border of the iliac wing and passes through the acetabular teardrop in normal hip joints.

If the acetabular fossa touches or medially extends the ilioischial line this is a finding of coxa profunda , which itself can be seen in different hip pathologies such as acetabular dysplasia or pincer morphology ,and also in asymptomatic or normal hips .

If in addition, the femoral head is medial or close to the ilioischial line and medial to the acetabular walls this is a sign of protrusio acetabuli  , which itself can be seen in osteoarthritis, rheumatoid arthritis, post-traumatic hip joints , osteogenesis imperfecta , or Paget disease.

Disruption of the ischioanal line is considered a sign for a posterior column fracture .