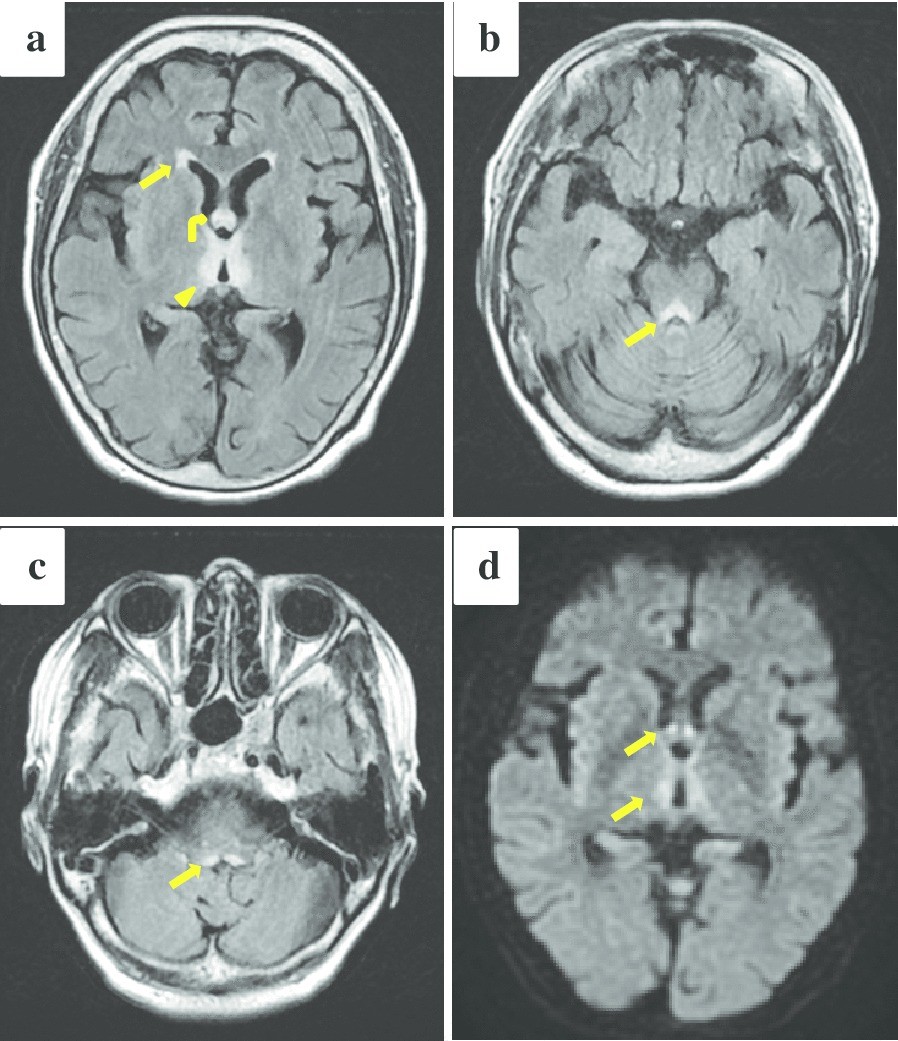 Development
of Wernicke’s encephalopathy long after subtotal stomach-preserving pancreatoduodenectomy: a case report. a–d Contrast-enhanced MRI of the head showing symmetrically abnormal hyperintense signal on FLAIR in the frontal horn of lateral ventricle (a, arrow), the medial thalami bordering the third ventricle (a, arrow head), the mammillary bodies (a, curved arrow), the periaqueductal region of the midbrain (b, arrow), and the bottom of the 4th ventricle (c, arrow). DWI imaging showing restricted diffusion corresponding to the FLAIR hyperintensities (d, arrows)
surgicalcasereports.springeropen.com • CC-by-4.0

Restrictive
diet in a patient with irritable bowel syndrome leading to Wernicke encephalopathy. Fluid-attenuated inversion recovery imaging demonstrating characteristic changes of Wernicke encephalopathy including hyperintense signal changes in the bilateral dorsomedial thalami (a), inferior tectal plate (b) and around the periaqueductal gray matter within the dorsal midbrain (c)
bmcgastroenterol.biomedcentral.com • CC-by-4.0 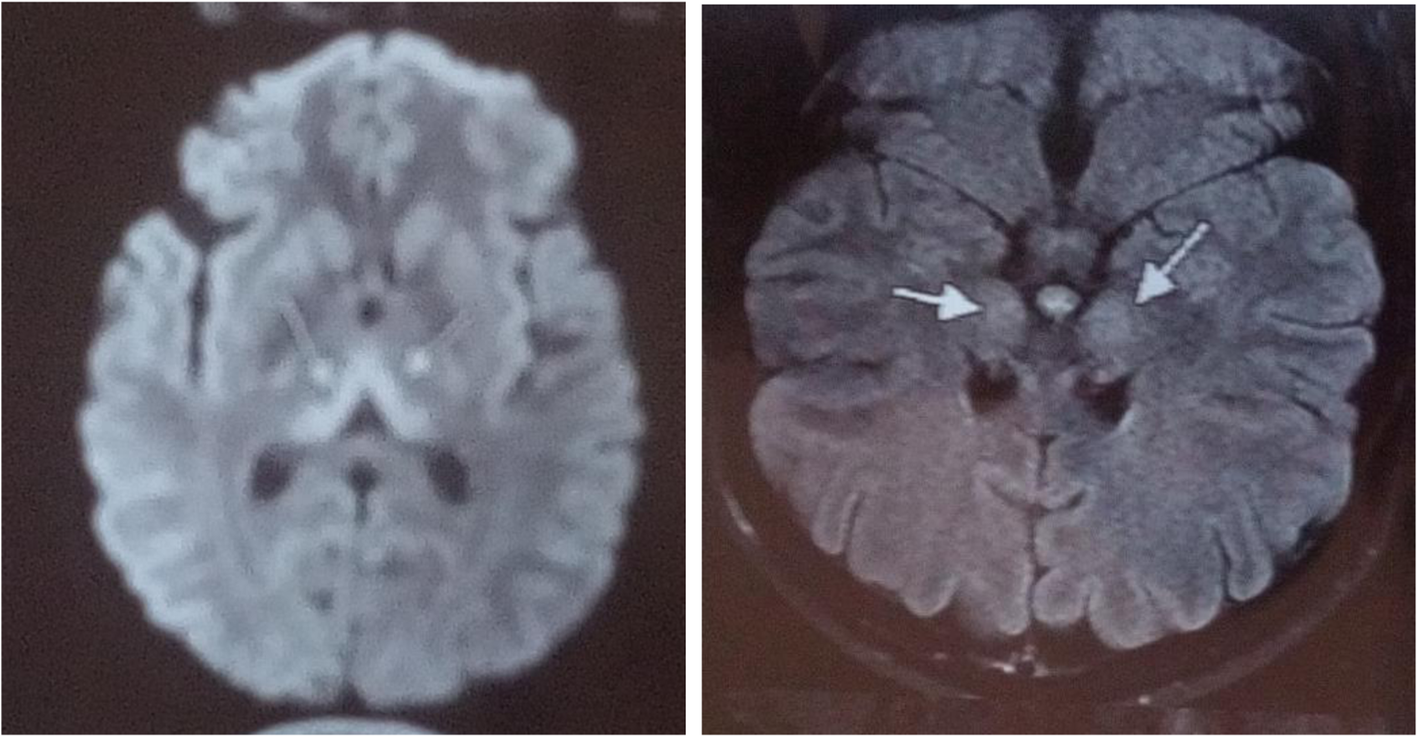 A case of
Gayet-Wernicke encephalopathy with misleading symptoms. Image of the brain showing symmetrical hyperintensity in bilateral pulvinar nuclei of the thalamus on the MRI
asja.springeropen.com • CC-by-4.0 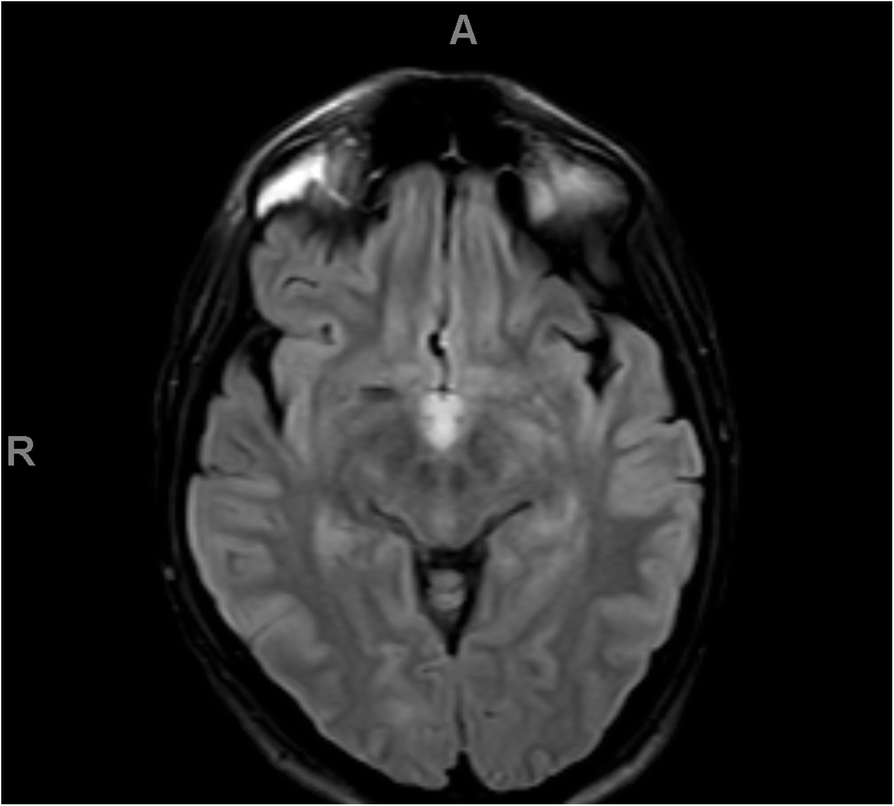 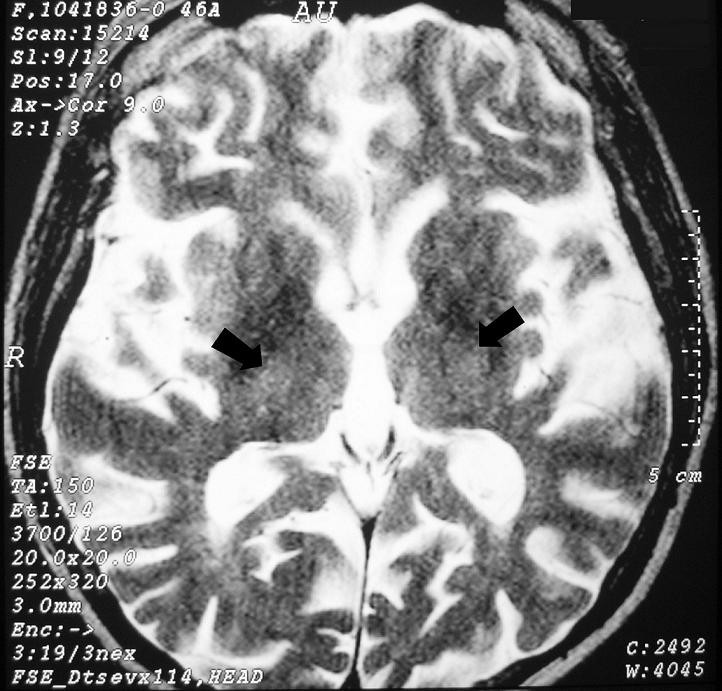 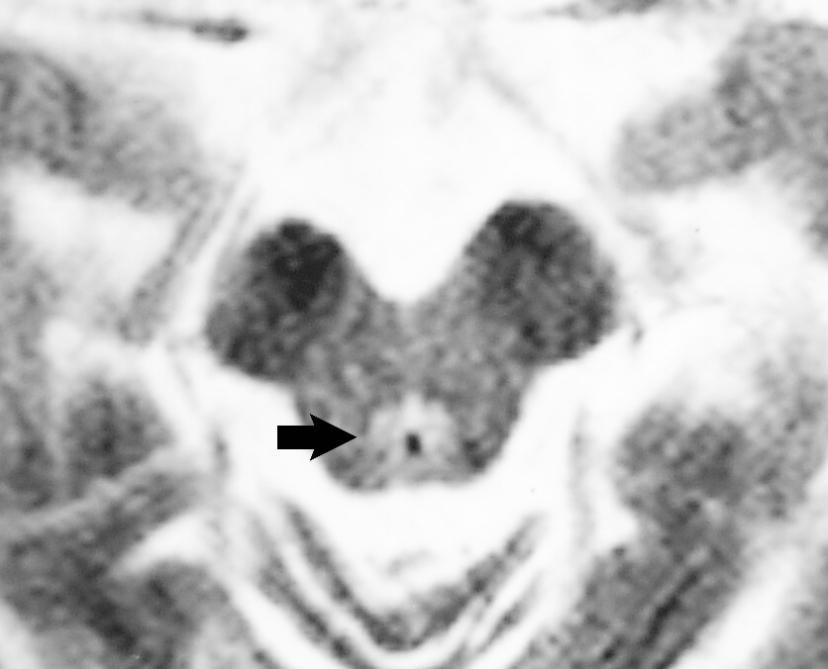 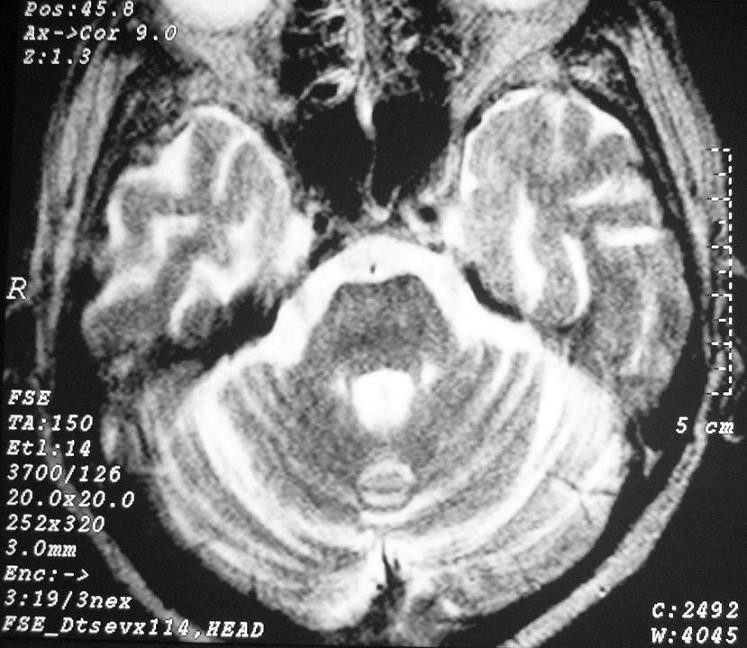 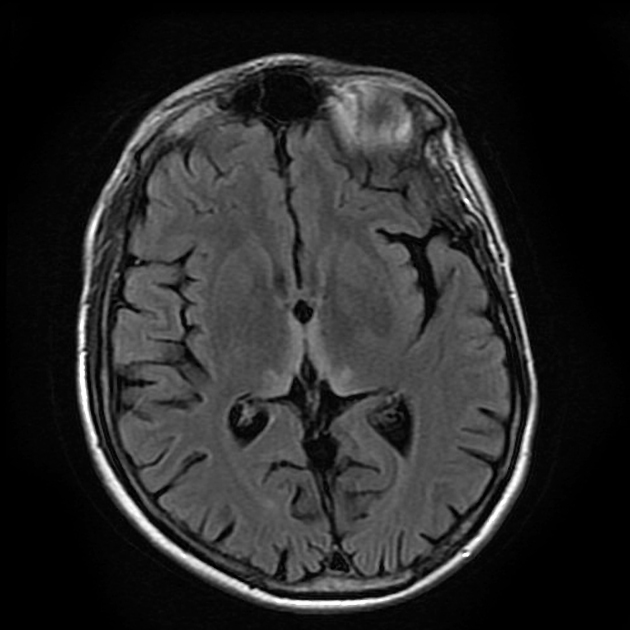 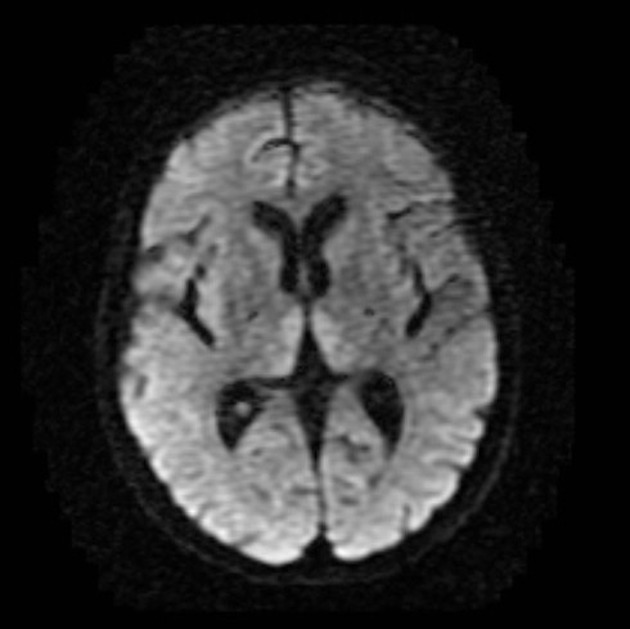 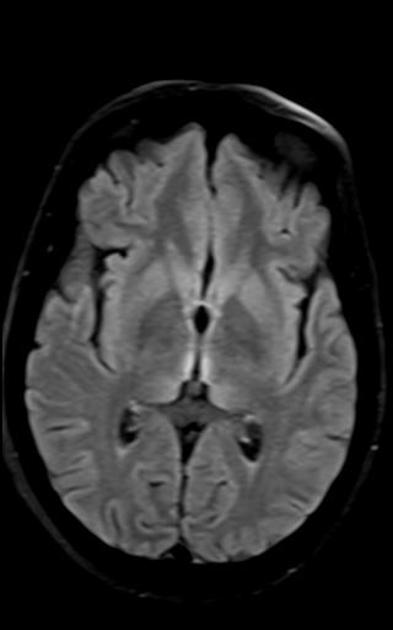 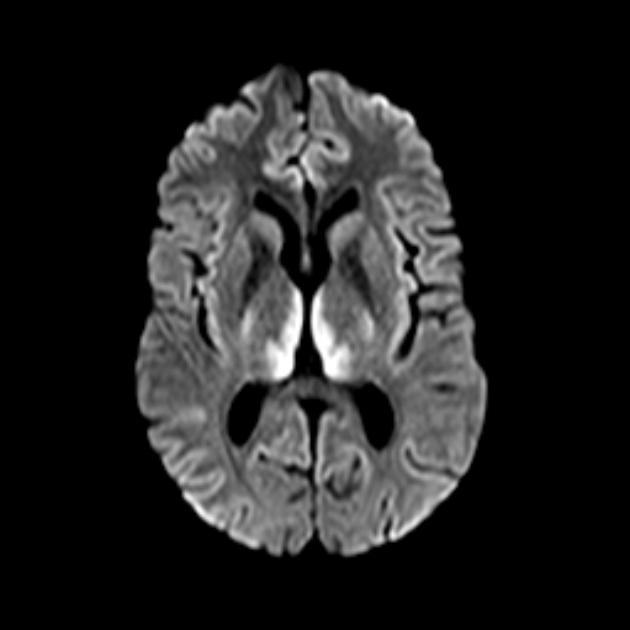 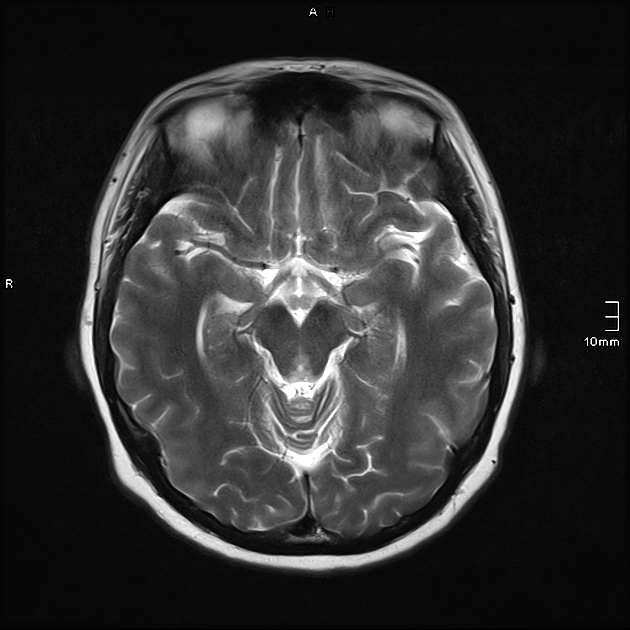 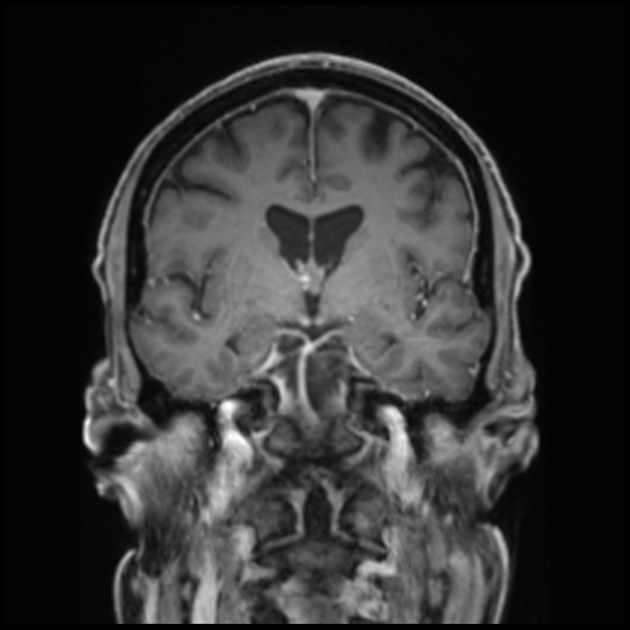 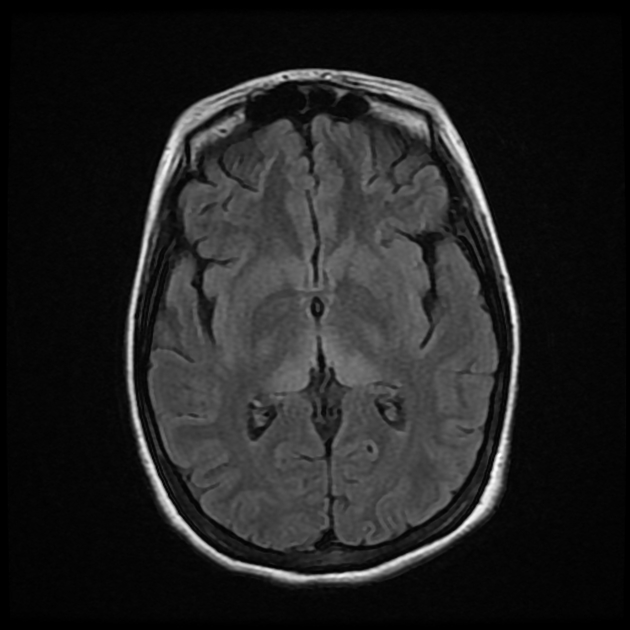 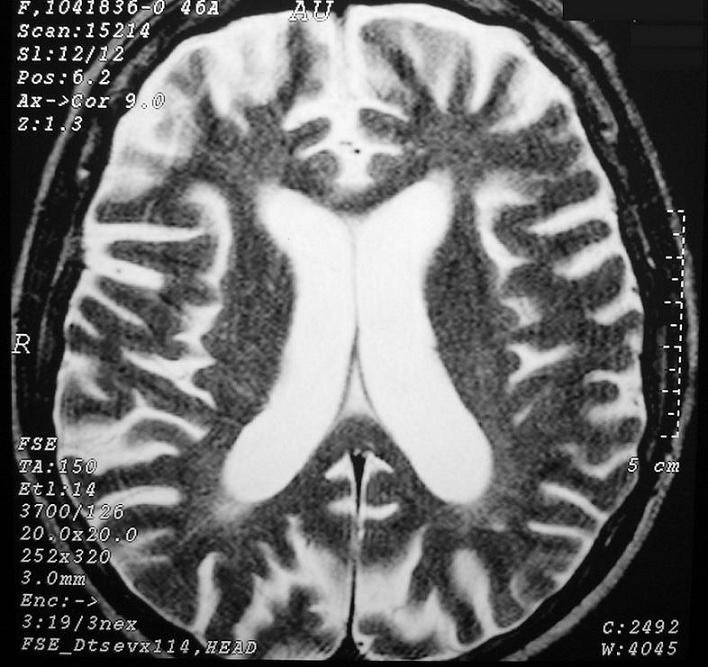 Wernicke encephalopathy, also referred as Wernicke-Korsakoff syndrome, is a form of thiamine (vitamin B1) deficiency, and is typically seen in alcoholics.

On imaging, it is commonly seen on MRI as areas of symmetrical increased T2/FLAIR signal involving the mammillary bodies, dorsomedial thalami, tectal plate, periaqueductal area and/or around the third ventricle.

It was originally described as characterized by the triad of:

Wernicke encephalopathy can evolve into the chronic form of thiamine deficiency known as Korsakoff psychosis, characterized by:

The two terms are often concatenated to form Wernicke-Korsakoff syndrome.

Thiamine deficiency results from malnutrition or malabsorption, which can occur for a number of reasons :

In acute stages, hemorrhage, necrosis, and edema may be present. In chronic stages, atrophic changes may be present especially involving the mamillary bodies.

Treatment of acute Wernicke-Korsakoff syndrome is with intravenous thiamine hydrochloride, along with other vitamins/minerals, and treatment of the underlying cause (e.g. alcohol cessation). Untreated, there is high mortality of up to 20% .

It is named after: