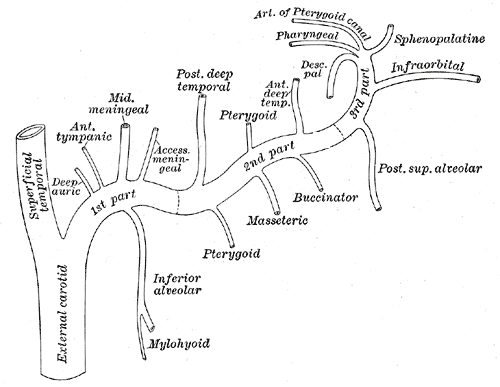 Superficial
dissection of the right side of the neck, showing the carotid and subclavian arteries.
Wikipedia • Public domain
Hallo!
Radiopaedia • CC-by-nc-sa 3.0 • de

The (internal) maxillary artery is the larger of the two terminal branches of the external carotid artery.

The maxillary artery's origin is behind the neck of the mandible, at first, it is embedded in the substance of the parotid gland. From there it passes anterior between the ramus of the mandible and the sphenomandibular ligament, and then runs, either superficial or deep to the lateral pterygoid muscle, to the pterygopalatine fossa. It supplies the deep structures of the face.

The maxillary artery is divided into three portions by its relation to the lateral pterygoid muscle:

Five branches, each of which enters a bony foramen:

Five branches although pterygoid branches are irregular in their number and origin:

Six branches including the terminal branch:

A long mnemonic to remember these branches is: