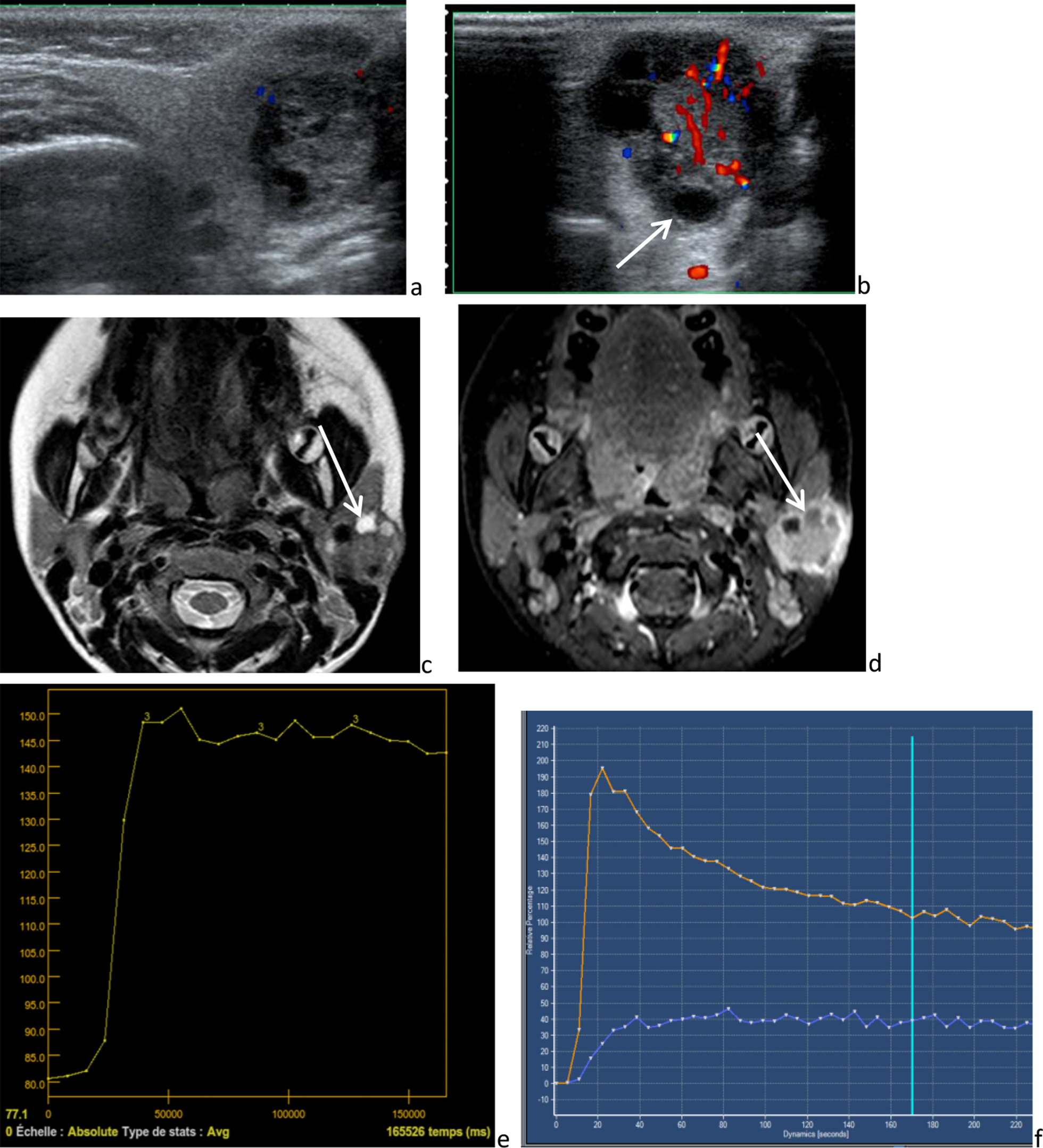 Imaging of
parotid anomalies in infants and children. Intermediate-grade mucoepidermoid carcinoma: poorly delineated, heterogeneous tumor containing small necrotic areas [white arrow] and strongly enhanced, on ultrasonography (a and b), axial T2-weighted image (c) and T1-weighted image, after intravenous injection of gadolinium chelate (d). Time intensity curve with a signal growing rapidly in the first phase and a low wash out (< 30%): type C or plateau pattern (according to Yabuuchi), suggestive of malignancy (e). Conversely, time intensity curve of type B (orange line), with a high wash out (> 30%), in a case of parotid benign lymphadenopathy (f)
insightsimaging.springeropen.com • CC-by-4.0
Hallo!
Radiopaedia • CC-by-nc-sa 3.0 • de

Mucoepidermoid carcinoma is a tumor that usually occurs in the salivary glands. It can mimic most other tumors of the glands, and therefore is often considered in the differential.

In the parotid gland, they are the most common malignant primary neoplasm. A slight female predilection has been described, and radiation has been implicated as a risk factor .

Mucoepidermoid carcinomas most frequently arise in the parotid gland, and presents as a painless swelling, with or without facial nerve involvement. These tumors can however be found anywhere there are salivary glands. Overall distribution across various glands is as follows :

As such, presentation will depend on the anatomic location.

The tumors are composed of a mixture of:

Typically a well-circumscribed hypoechoic lesion, with a partial or completely cystic appearance. The lesion stands out against the relatively hyperechoic normal parotid gland.

High-grade tumors, on the other hand, have poorly defined margins, infiltrate locally and appear solid.

Again, imaging is dependent on grade.

High-grade tumors, on the other hand, have lower signal on T2 and poorly defined margins and infrequent cystic areas:

It is essential to image the cranial nerves with fat-saturated post-contrast T1 sequences to assess for perineural spread, and as such the base of skull should be imaged up to and including the cavernous sinus and inner ear.

Treatment is dependent on grade and location:

Additionally, this tumor has a predilection for perineural spread, and careful and long term follow-up is therefore required.

The differential is therefore different according to appearance.