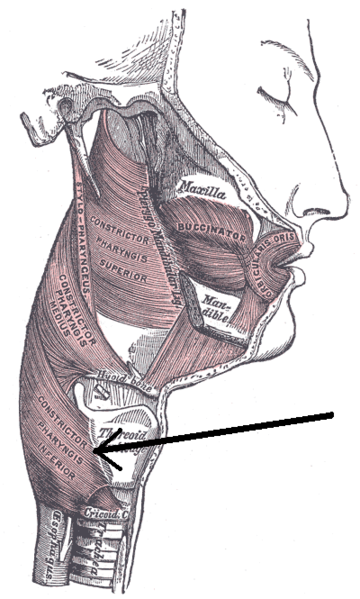 Muscles of
the pharynx, viewed from behind, together with the associated vessels and nerves. (Modified after Testut.)
Wikipedia • Public domain
Hallo!
Radiopaedia • CC-by-nc-sa 3.0 • de

The thyropharyngeus muscle arises from the (a) thyroid cartilage at the oblique line and (b) the tendinous arch that spans the cricothyroid muscle. Its fibers curve around posteriorly and insert into the midline raphe. The lower fibers are horizontal and lie edge to edge with those of the cricopharyngeus component.

The cricopharyngeus muscle is rounder and thicker than the other constrictor muscles. Its fibers run continuously from one side of the cricoid arch to the other side around the pharynx without inserting into a midline raphe posteriorly. Its muscle fibers are continuous with the circular muscular coat of the esophagus. It acts as a sphincter at the lower end of the pharynx and is always closed except for momentary relaxation during swallowing.

The cricopharyngeus has an important sphincteric function. It is physiologically in a tonic state, constricting the distal end of the pharynx (in coordination with the superior pharyngeal constrictor and the middle pharyngeal constrictor muscles). It is always closed except for momentary relaxation during swallowing. Its closure prevents air from being sucked into the upper esophagus when intrathoracic pressure falls, allowing air to be sucked only into the permanently open trachea.