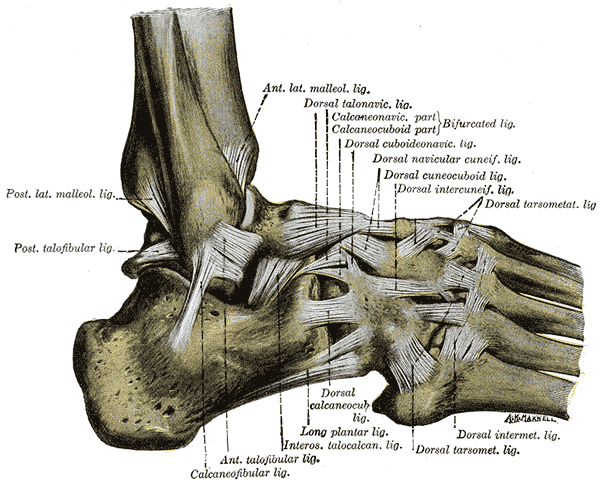 The ligaments
of the foot from the lateral aspect. (Quain.)
Wikipedia • Public domain 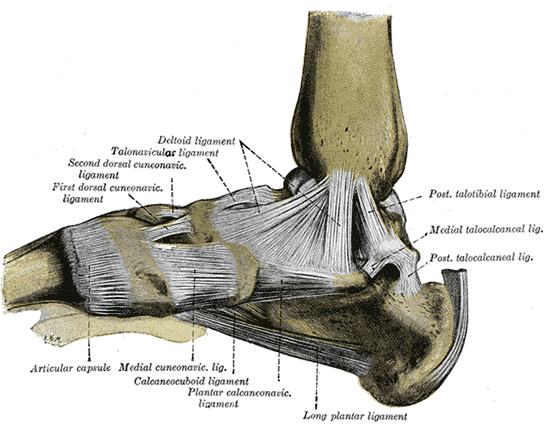 The ankle joint (also known as the tibiotalar joint or talocrural joint) forms the articulation between the foot and the leg. It is a primary hinge synovial joint lined with hyaline cartilage.

The ankle joint is comprised of the tibia, fibula and talus as well as the supporting ligaments, muscles and neurovascular bundles. It carries the weight of the body and can undergo a myriad of pathology, most commonly traumatic injuries of the medial and lateral malleoli.

The fibula has a similar inferior projection laterally, the lateral malleolus. The tibia has a partially curved surface to articulate with the talar dome which is wide anteriorly and narrows posteriorly.

The talus lies superior to the calcaneus and articulates with the navicular anteriorly.

The ligaments of the ankle form a medial and lateral group each comprising of three main ligaments.

The deltoid ligament is medial and is made of two parts. The deep parts is the tibiotalar part. The superficial triangular (delta) part is a continuous band projecting from the apex of the medial malleolus to the medial tubercle of the talus, the sustentaculum tali of the calcaneus and the tuberosity of the navicular.  With fusion with the spring ligament also.

The lateral ligaments include the anterior and posterior talofibular ligament and the calcaneofibular ligament. These ligaments fuse with the joint capsule to enclose the joint so any fracture involving the joint will invoke an ankle effusion. The interosseous tibiofibular ligament between the fibula and tibia is another important structure maintaining ankle stability. In the subtalar region the spring ligament (calcaneonavicular) maintains the integrity of the region.

There is an anterolateral, posteromedial and lateral compartment of the ankle typically superficial to the joint.

The posteromedial compartment, in order of anterior to posterior has the tendons of tibialis posterior and flexor digitorum longus, the posterior tibial artery, the tibial nerve and flexor hallucis longus tendon.