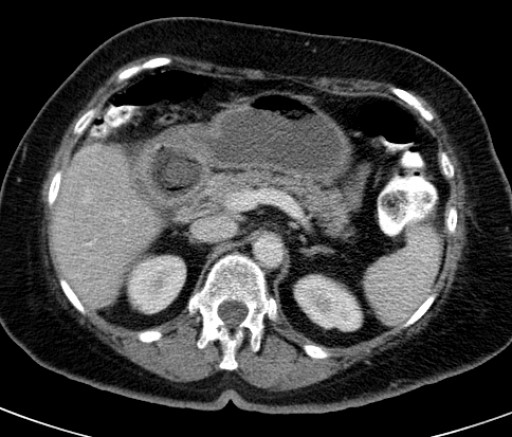 This image
is part of a series which can be scrolled interactively with the mousewheel or mouse dragging. This is done by using Template:Imagestack. The series is found in the category Bouveret"s syndrome - CT - MRI - case 001. Bouveret-Syndrom in der Magnetresonanztomographie: Man erkennt den großen Gallenstein, der aus der Gallenblase in das Duodenum perforiert ist und jetzt den Magenausgang verlegt.
Wikipedia • CC BY-SA 3.0

Bouveret syndrome refers to a gastric outlet obstruction secondary to impaction of a gallstone in the pylorus or proximal duodenum. Thus, it can be considered a very proximal form of gallstone ileus.

Bouveret syndrome occurs most commonly in elderly women. The presenting clinical situation is variable and non-specific but often includes nausea, vomiting, and epigastric pain. A history of gallstone disease will only be present in a minority of patients . Exemplifying reports of non-specific symptoms and comorbidities include synchronous acute diverticulitis and complicating acute pancreatitis , just to name a few.

Rigler triad (bowel obstruction, pneumobilia, and an ectopic gallstone) is seen only in a subset of patients. In cases where the offending gallstone is identified, its size (and hence the likelihood of mechanical obstruction) may be underestimated if only the calcified portion of the stone is measured .

Sonography may detect the presence of a cholecystoenteric fistula, residual gallstones and gastric outlet obstruction.

Early diagnosis is important because mortality is high, with reported figures ranging between 12-33%.

Endoscopy is preferred as a therapeutic option because removal may be performed with mechanical, electrohydraulic, or laser lithotripsy.

Surgery often is not desirable as the patients are often poor surgical candidates secondary to concomitant illnesses and advanced age.