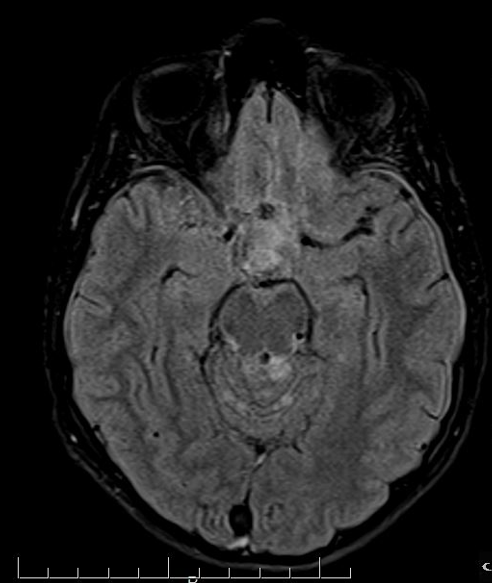 Diffuse
Leptomeningeal Glioneuronal Tumor. Axial FLAIR-weighted image shows nodular hyperintensities located at the suprasellar and cuadrigeminal cysterns. There is also increased signal of the leptomeninges and the dura. No hydrocephalus was present
www.eurorad.org • CC by-nc-sa-4.0 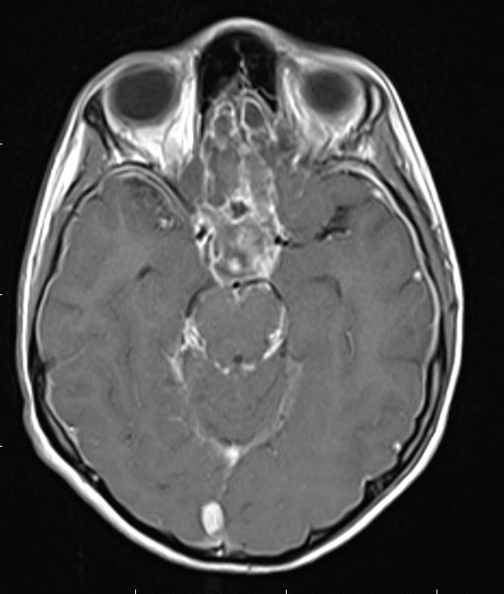 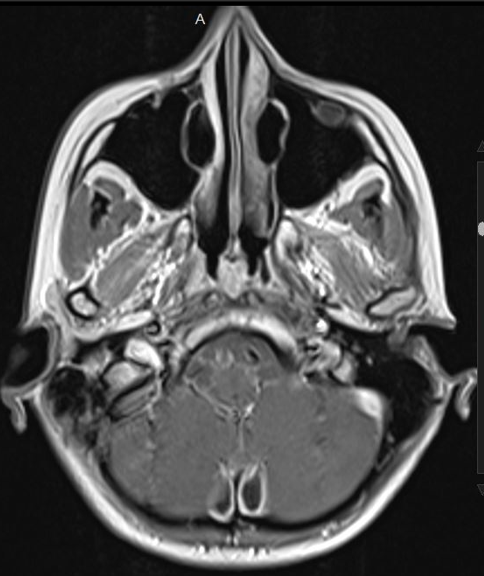 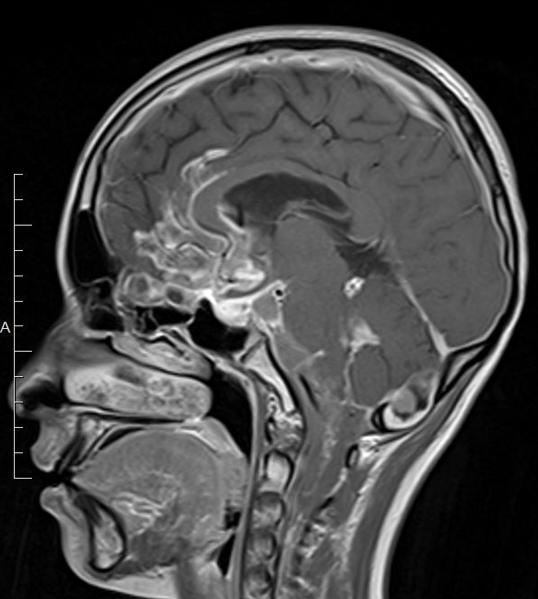 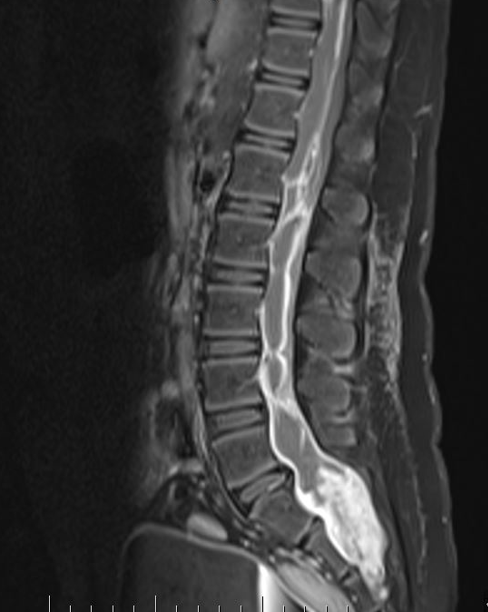 Diffuse leptomeningeal glioneuronal tumor (also previously known as disseminated oligodendroglial-like leptomeningeal tumor of childhood) is a rare and only recently described tumor of the central nervous system included in the WHO classification of CNS tumors in the 2016 update . Morphologically it appears as prominent leptomeningeal enhancement, often without a readily identifiable parenchymal component and leads to difficult to treat hydrocephalus.

These tumors are most commonly encountered in children and adolescents, with the vast majority of reported cases in individuals less than 18 years of age . Occasionally they are encountered in young to middle-aged adults . There appears to be a moderate male predilection .

Clinical presentation is dominated by hydrocephalus due to pronounced accumulation of tumor within the subarachnoid space. Occasionally, patients may present with focal neurological symptoms, including cranial nerve impairment, ataxia and spinal cord compression, or with seizures .

Although most of these tumors have a low-grade histological appearance, they have not yet been assigned a grade in the current (2016) WHO classification of CNS tumors .

These tumors histologically are composed of intense desmoplastic fibrous response admixed with cells with perinuclear halos and cytoplasmic swelling similar to oligodendroglial cells. They have round to oval nuclei with finely granular dispersed chromatin and inconspicuous nucleoli .

This morphology, combined with common chromosome arm 1p deletions, sometimes with co-deletion of 19q, accounts for its prior name including the term "oligodendroglial-like" (see 1p19q codeletion). In contrast to oligodendrogliomas, diffuse leptomeningeal glioneuronal tumors do not have IDH mutations .

Other markers identified include :

Negative for neurofilament and EMA, and no IDH mutations .

The vast majority of reported cases are low-grade, indolent tumors and have a commensurately low mitotic index (<1%) . A few cases with cellular anaplasia and increased mitotic rate and even microvascular proliferation have been reported, and these have, not surprisingly, had more aggressive clinical course .

Imaging is ideally carried out with MRI although CT will demonstrate many of the same features, within its limitations.

The dominant finding is of thick nodular leptomeningeal enhancement particularly around the basal cisterns and extending over the surface of the brain and spinal cord .

A further finding, which is believed to be fairly specific for this entity, is the presence of numerous small subpial cysts (high T2, low T1, FLAIR attenuating) located over the surface of the inferior parts of the cerebral hemispheres (temporal lobes, inferior frontal lobes), posterior fossa (cerebellum and brainstem) and spinal cord . It is thought that perhaps these represent dilatation of the perivascular spaces (Virchow-Robin spaces) .

Importantly there is often no definitely dominant primary parenchymal mass identified . In many patients, however, discrete intraparenchymal lesions can be identified, most frequently in the spinal cord .

Although diffuse leptomeningeal glioneuronal tumors demonstrate fairly indolent growth, morbidity is fairly prominent due to profound hydrocephalus . Complicating matters is that the entity is only newly described and the literature is confusing; it is unclear if all reported cases are in fact of the one entity. Survival varies widely, in some instances reported to be quite low, with an average survival of only 22 months , whereas in other series have long follow-up .