Clinical and
radiological features of lung disorders related to connective-tissue diseases: a pictorial essay. Axial HRCT images of an NSIP pattern in a patient with rheumatoid arthritis. A, B Ground-glass opacities (empty white arrows) can be appreciated through the pulmonary parenchyma. The heterogeneous distribution of ground glass regions reflects areas of inflammation—alternated to normal lung regions
insightsimaging.springeropen.com • CC-by-4.0 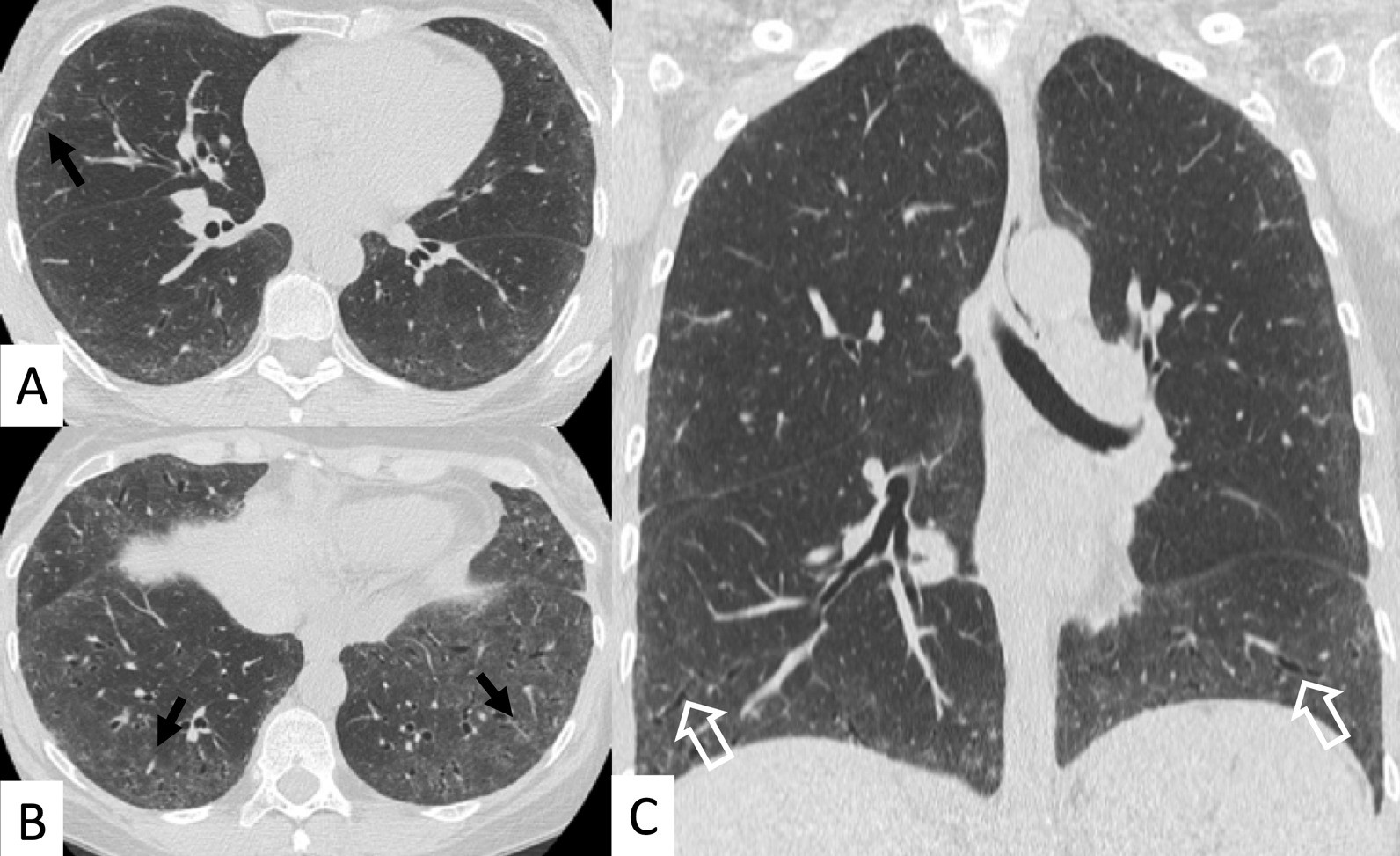 Clinical and
radiological features of lung disorders related to connective-tissue diseases: a pictorial essay. Axial (A, B) and coronal (C) HRCT images of an SSc patient demonstrate NSIP pattern with ground-glass opacities (black arrows), well depicted in the subpleural and basal regions of the lung; fine reticulations may be also observed. Coronal MPR image is useful to better delineate the presence of small bronchiectasis, which may be seen in the peripheral basal regions (white empty arrows)
insightsimaging.springeropen.com • CC-by-4.0
Hallo!
Radiopaedia • CC-by-nc-sa 3.0 • de

On imaging, the most common features are relatively symmetric and bilateral ground-glass opacities with associated fine reticulations and pulmonary volume loss resulting in traction bronchiectasis. Immediate subpleural sparing, when present is considered very specific for NSIP.

Non-specific interstitial pneumonia typically tends to present in middle-aged adults, 40-50 years of age . It may be common in Caucasian-European populations . Overall prevalence is higher in women due to high association with collagen vascular diseases, but the prevalence of idiopathic NSIP is similar in both genders.

Primarily idiopathic but the morphological pattern can be seen in association with a number of conditions:

If there is no underlying cause, it is termed idiopathic NSIP; which is now considered a distinct entity.

Smoking is not associated, and it is not a protective factor either.

The symptoms of non-specific interstitial pneumonia are - by definition - non-specific and include insidious onset of dyspnea and dry cough with a restrictive pattern of decreased lung function and reduced gas exchange capacity.

Temporal and spatial homogeneity in a specimen is an essential feature. Historically non-specific interstitial pneumonia was divided into three groups; however, due to similar outcomes, groups II and III (mixed cellular and fibrotic and mostly fibrotic, respectively) are now both classified as fibrotic type:

A chest radiograph can be normal in the early stages. There may be ill-defined or ground glass opacities with lower lobe distribution or consolidation in a patchy, reticulonodular or mixed pattern. A bilateral pulmonary infiltrative pattern with volume loss of lower lobes may be seen in those with advanced disease.

Imaging features can overlap between cellular and fibrotic types as well as usual interstitial pneumonitis (UIP) in as high as 30% of patients. Also, temporal changes in the pattern of HRCT findings in subsequent studies shown in as high as 28% of cases resulted in the change of provisional diagnosis from NSIP to UIP.

Involvement tends to be subpleural and generally symmetrical with an apicobasilar gradient. Solely or predominantly upper lobe involvement or purely unilateral disease makes the diagnosis of NSIP less likely.

The presence of the following features, although they can be seen in NSIP, should make us think about other differentials:

In general, non-specific interstitial pneumonia (NSIP) carries a much more favorable prognosis than a UIP-type pattern with 90% 5-year survival rate for cellular and ~60% (range 45-90%) 5-year survival in the fibrotic subtype. Cellular NSIP shows an even better response to corticosteroids and carries a substantially better prognosis than the fibrotic type. Correct and early diagnosis has a significant impact on patients' outcome because NSIP usually responds well to the corticosteroid therapy or cessation of inciting causes like drugs or organic allergens . Mycophenolate mofetil (MMF) has also shown to improve lung function .

It is thought to have been initially described by Katzenstein and Fiorelli in 1994 .

The key differential is a usual interstitial pneumonitis (UIP) pattern, with which there can be some overlap in imaging features . The features which favor the diagnosis of NSIP over UIP are symmetrical bilateral ground-glass opacities with fine reticulations and sparing of the immediate subpleural space. The presence of macroscopic honeycombing is almost diagnostic for UIP.