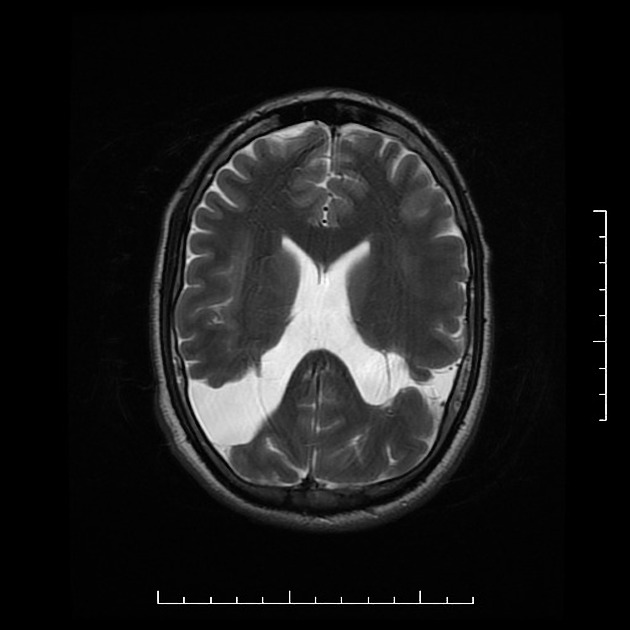 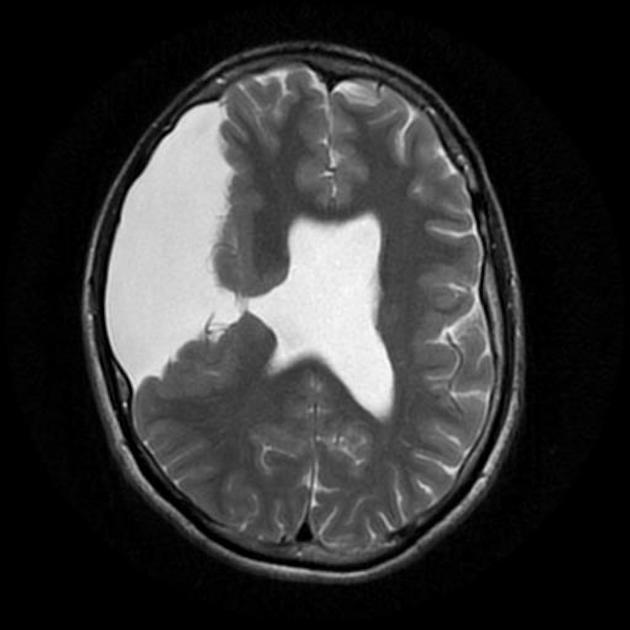 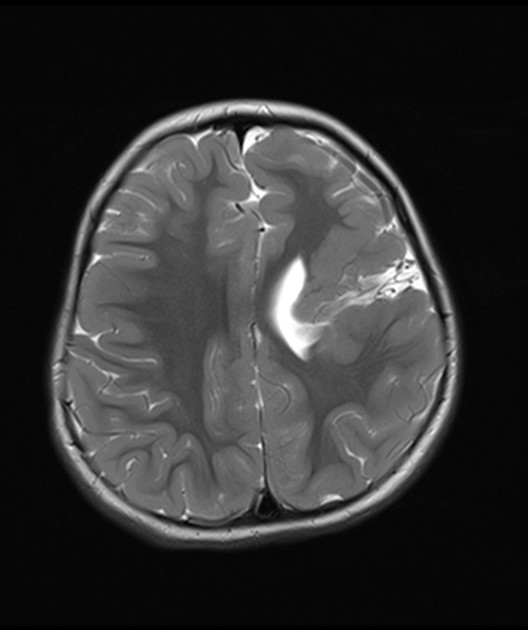 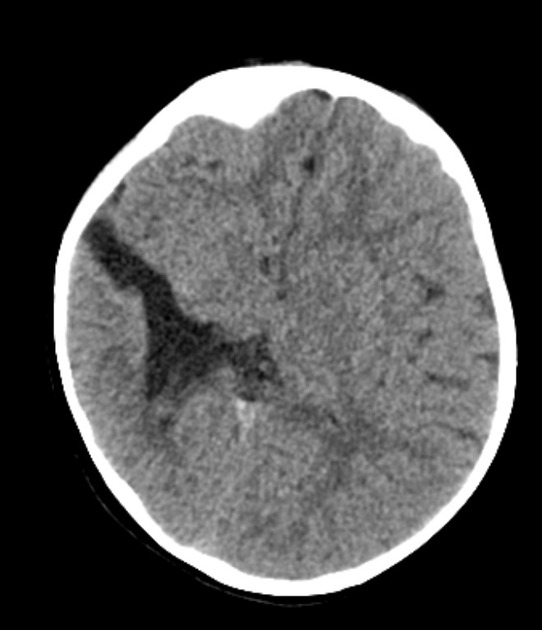 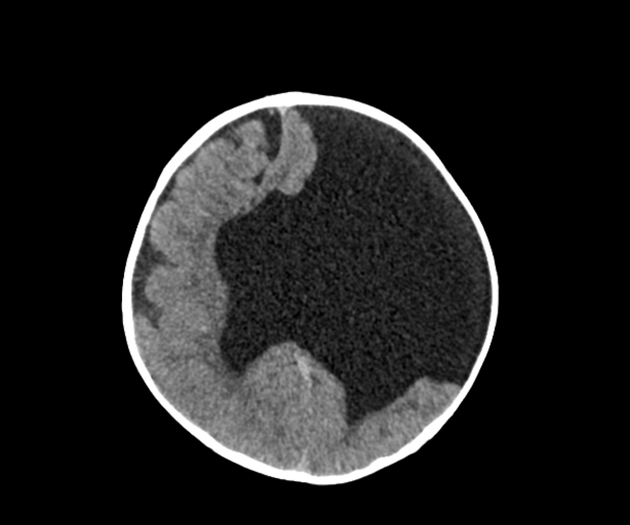 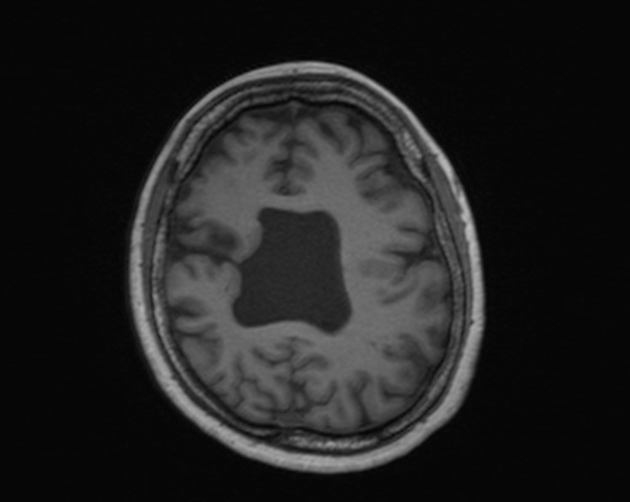 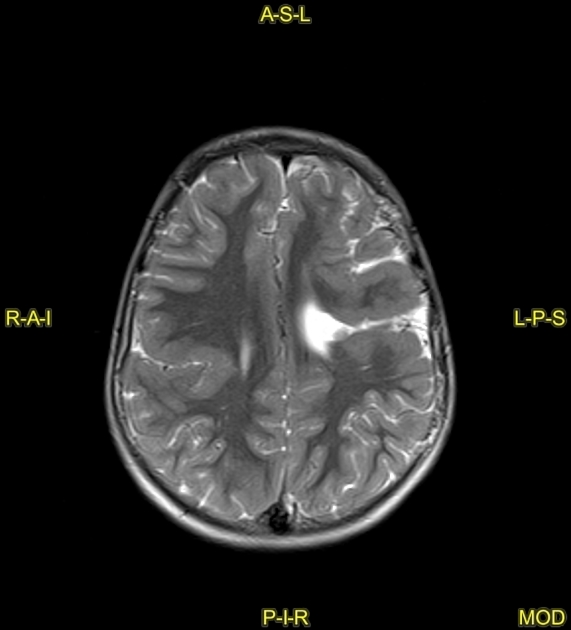 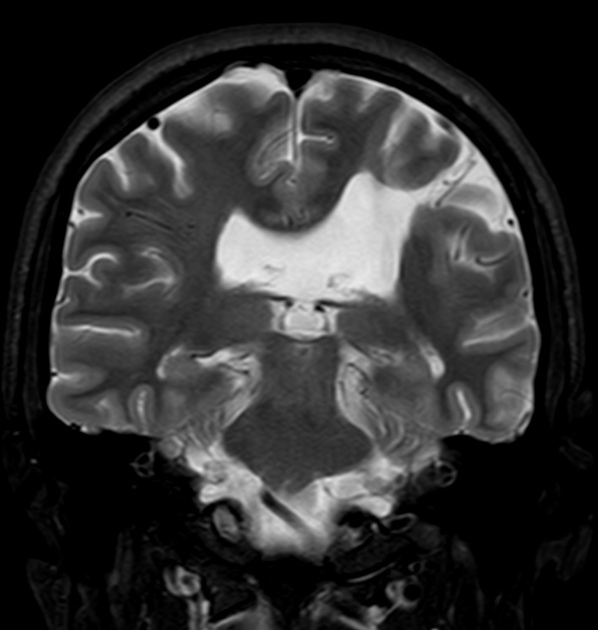 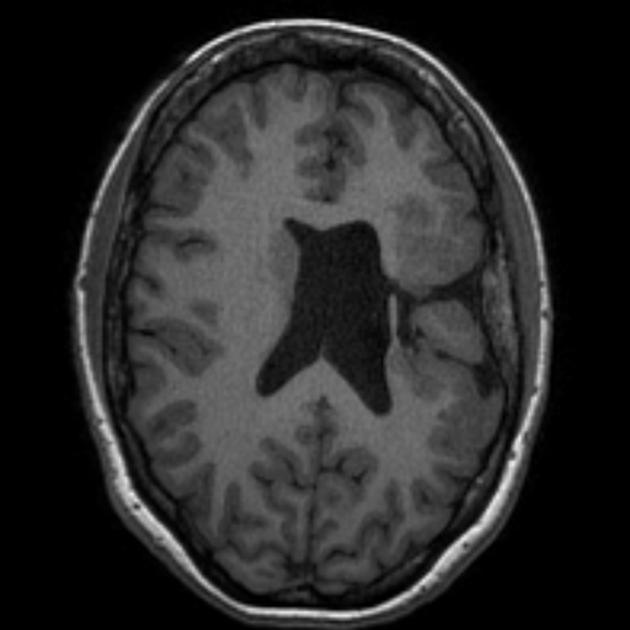 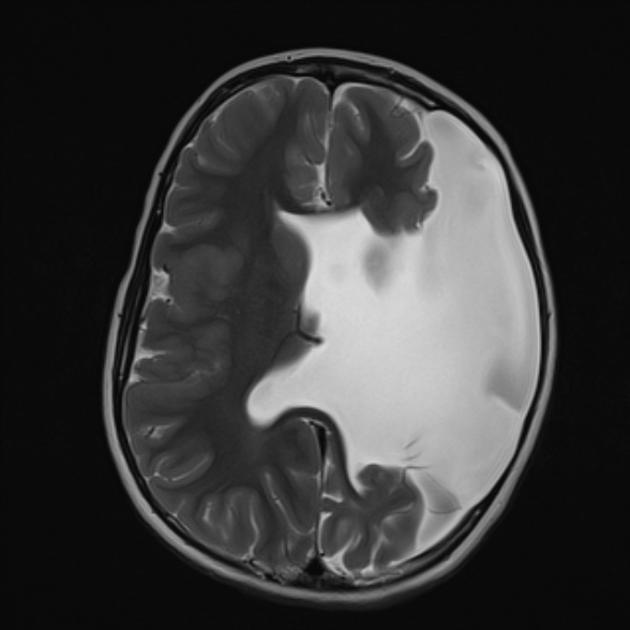 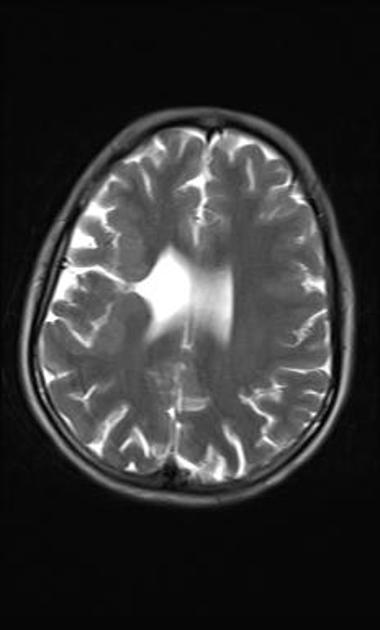 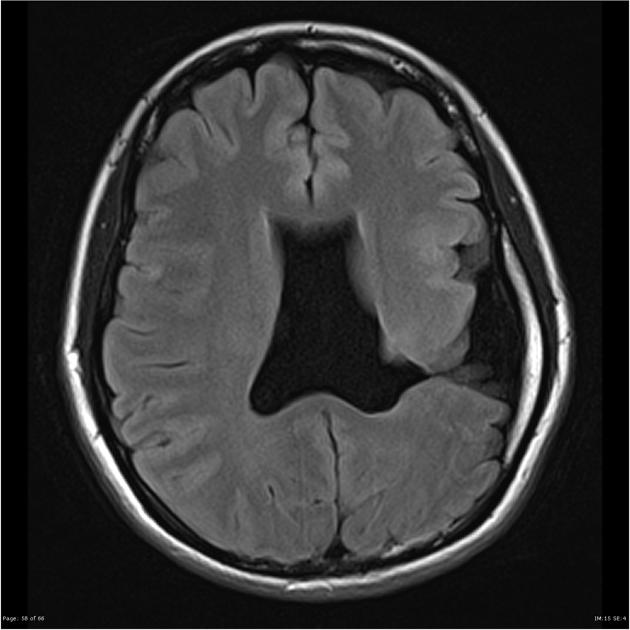 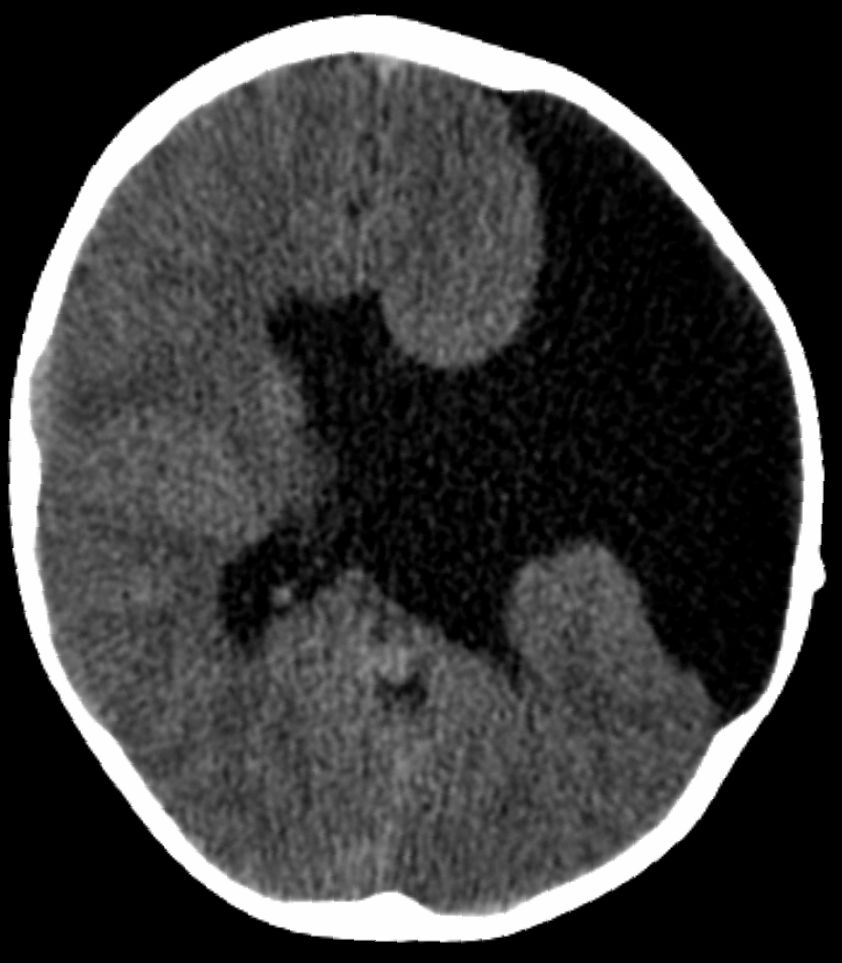 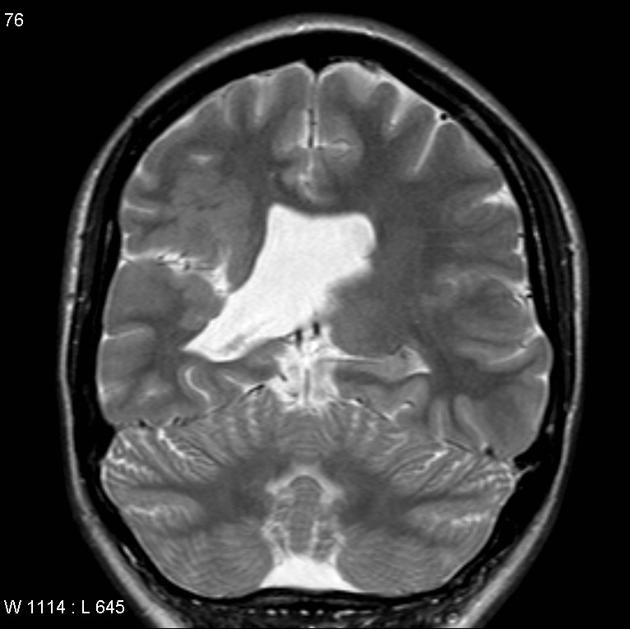 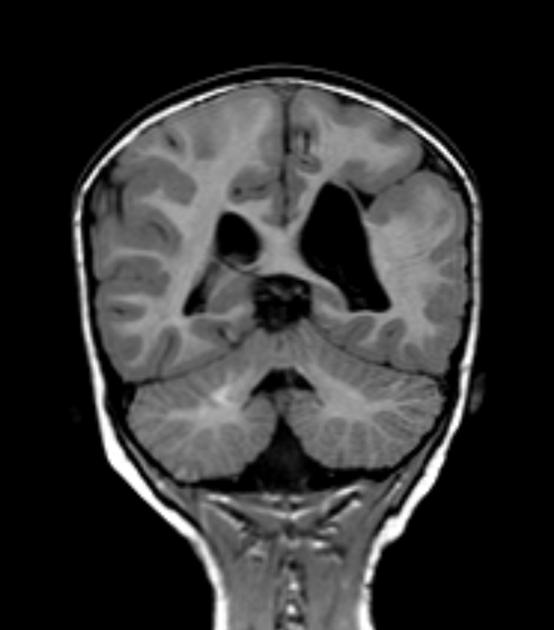 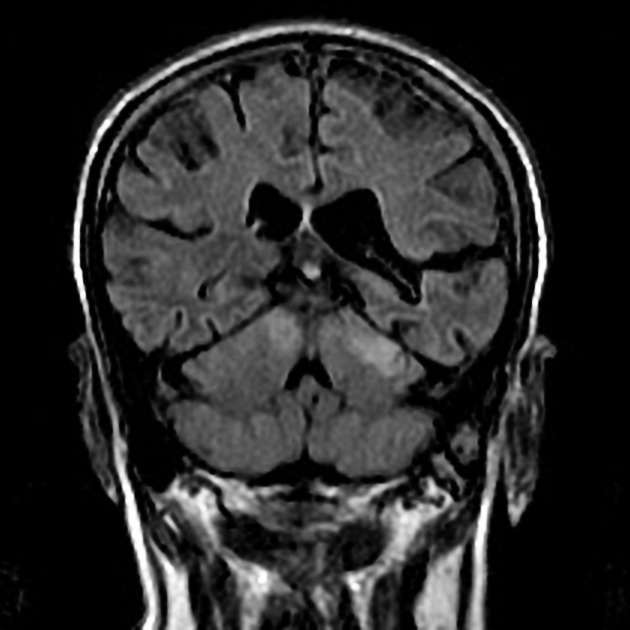 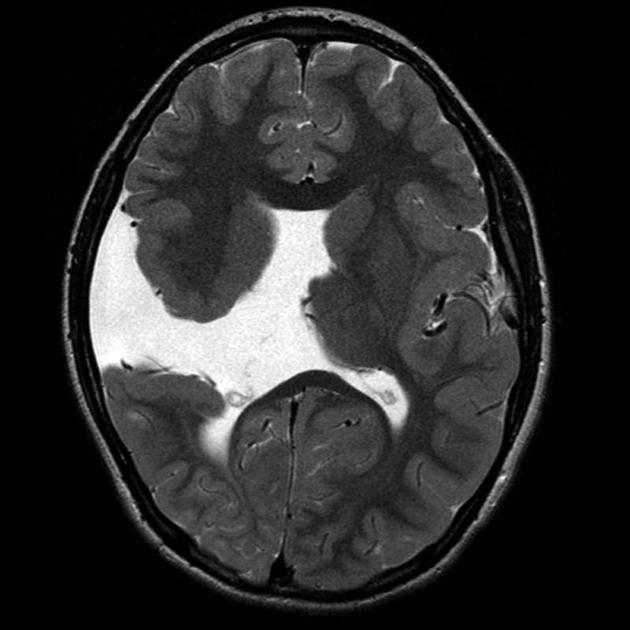 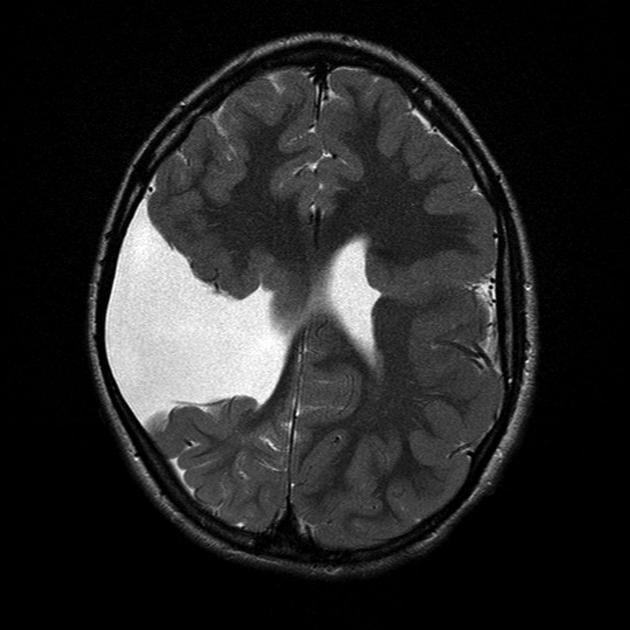 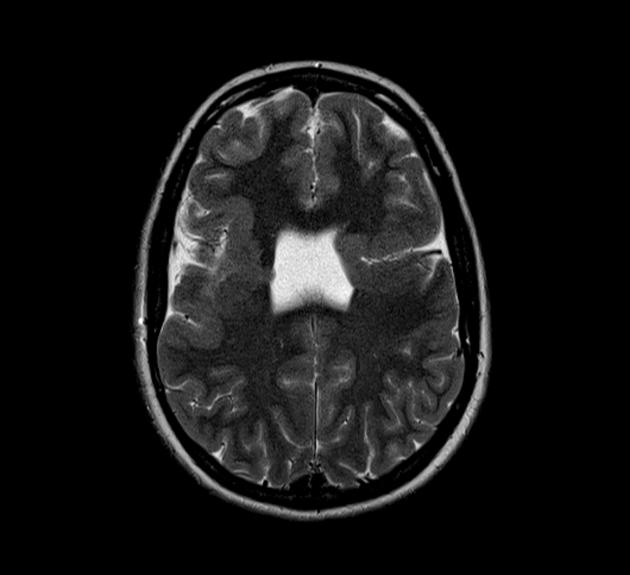 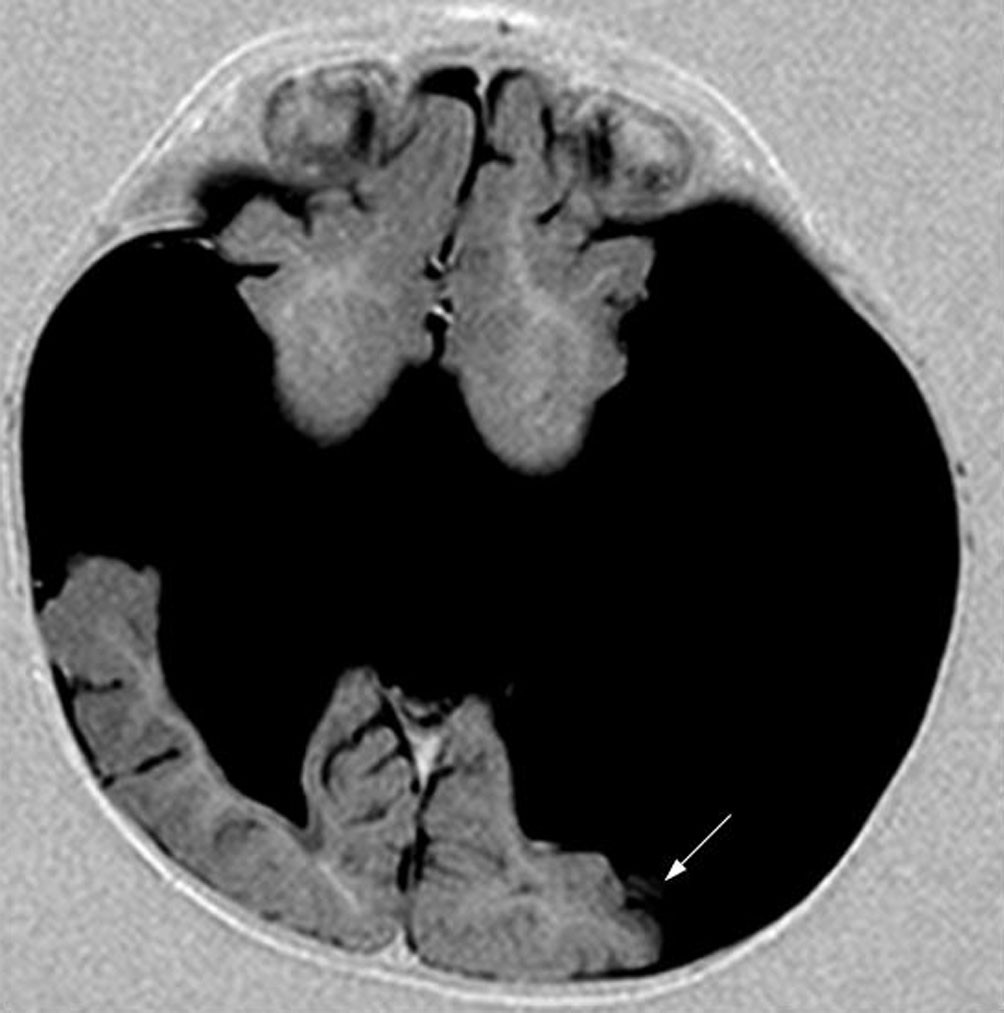 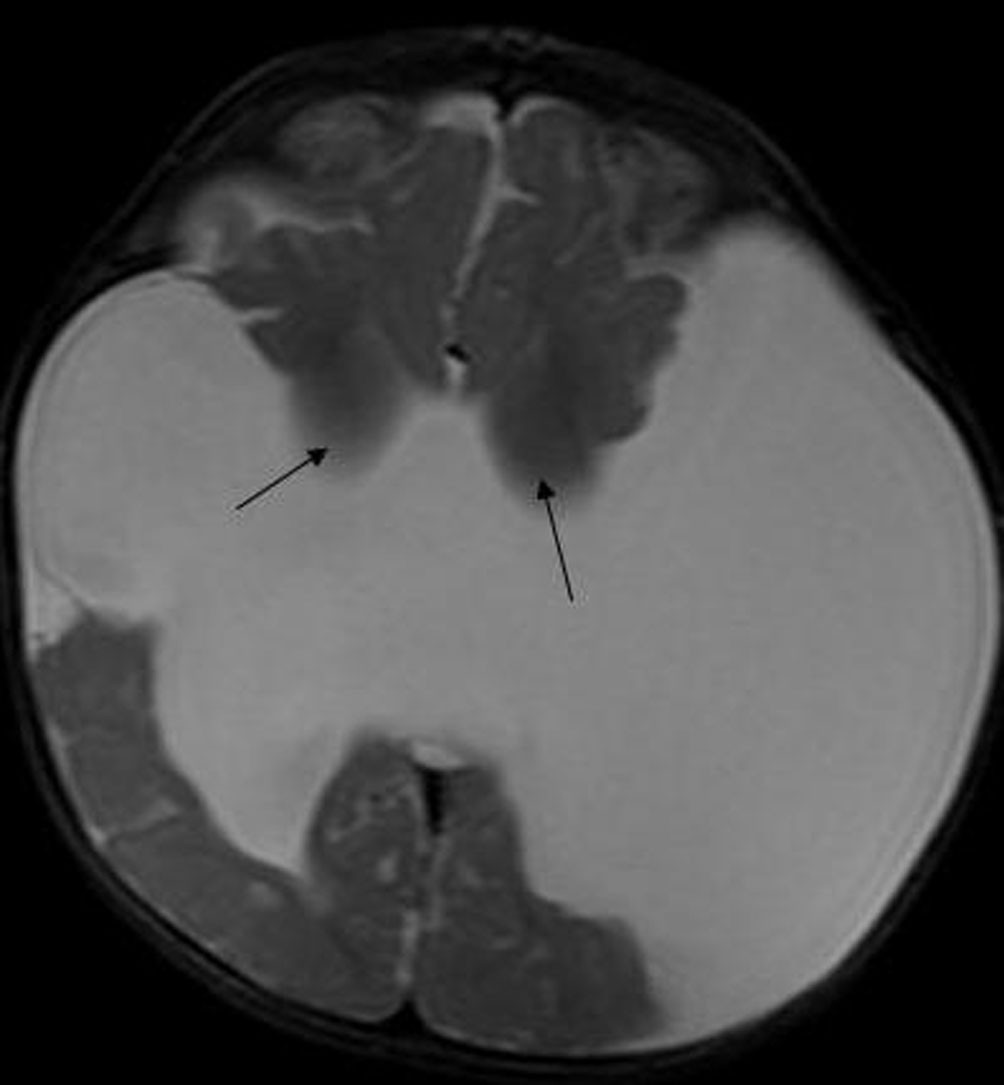 Bilateral
giant open lip schizencephaly with associated cerebral anomalies: a case report. Structures likely to be the caudate nuclei are observed, but their configuration is disrupted (arrows). The other parts of the basal ganglia including globus pallidi and putamina are absent.
casesjournal.biomedcentral.com • CC-by-3.0 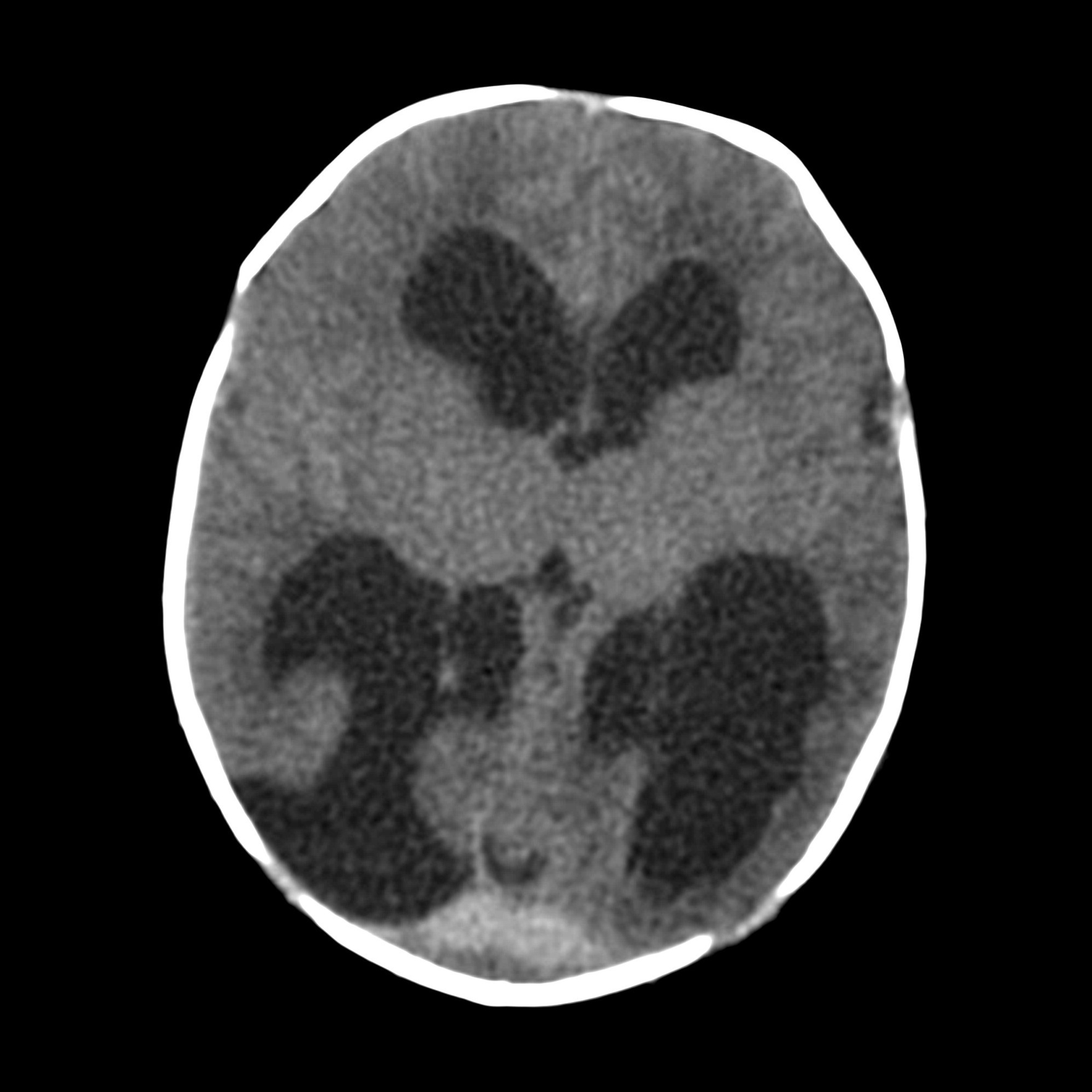 Infant with
hydrocephalus on prenatal ultrasound. Axial CT without contrast of the brain shows a cerebrospinal fluid tract communicating between the right occipital cortex and the posterior horn of the right lateral ventricle that was felt to be lined by gray matter on both sides.The diagnosis was right open lip schizencephaly.
pediatricimaging.org • CC-by-nc-sa 4.0 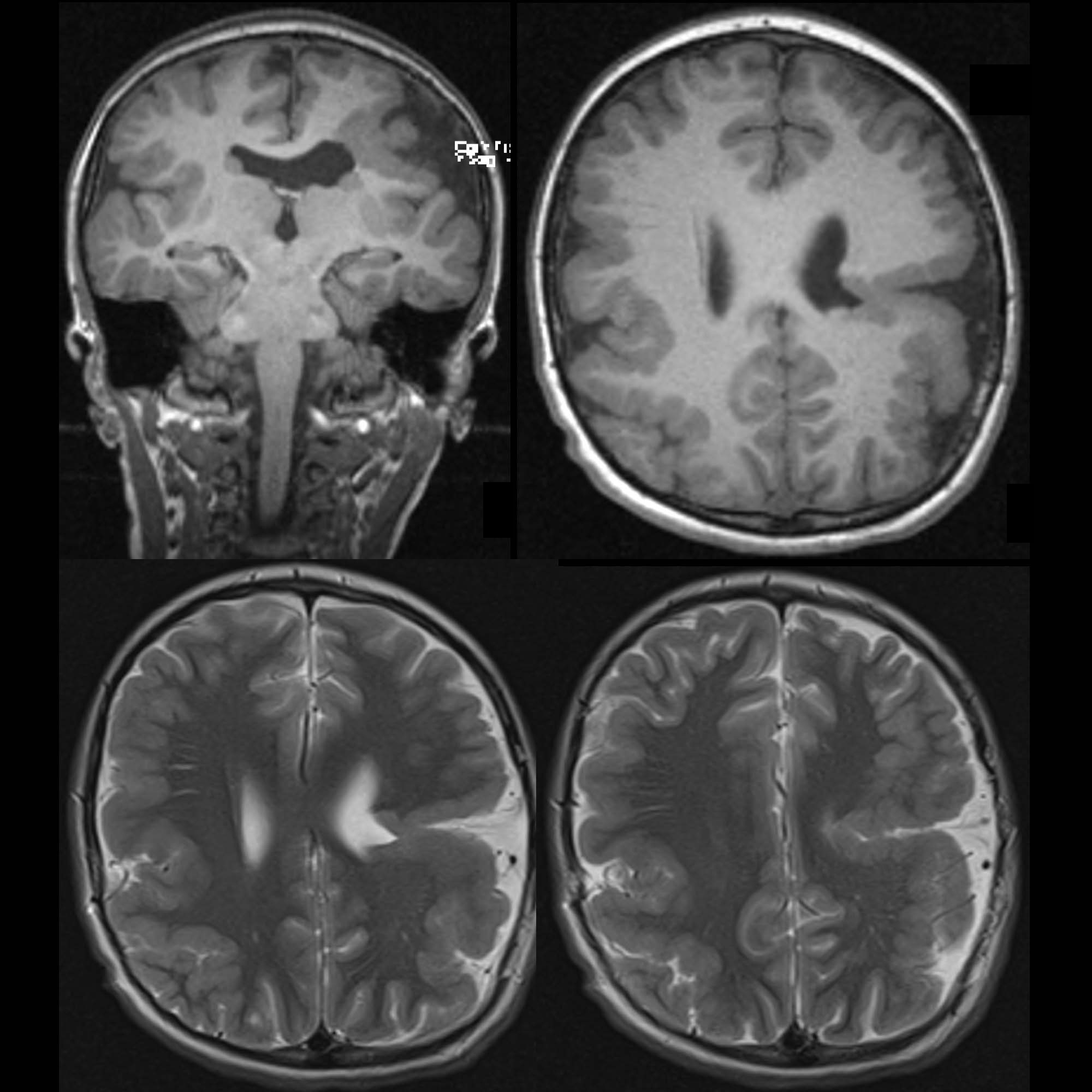 School ager
with seizures. Coronal and axial T1 (above) and axial T2 (below) MRI without contrast of the brain shows small haphazard appearing gyri and too few sulci present bilaterally, left greater than right, primarily in the sylvian fissures. There is also a cleft of gray matter with cerebrospinal fluid within extending from the cortex to the posterior aspect of the left lateral ventricle.The diagnosis was bilateral perisylvian polymicrogyria in a patient with left open lip schizencephaly.
pediatricimaging.org • CC-by-nc-sa 4.0 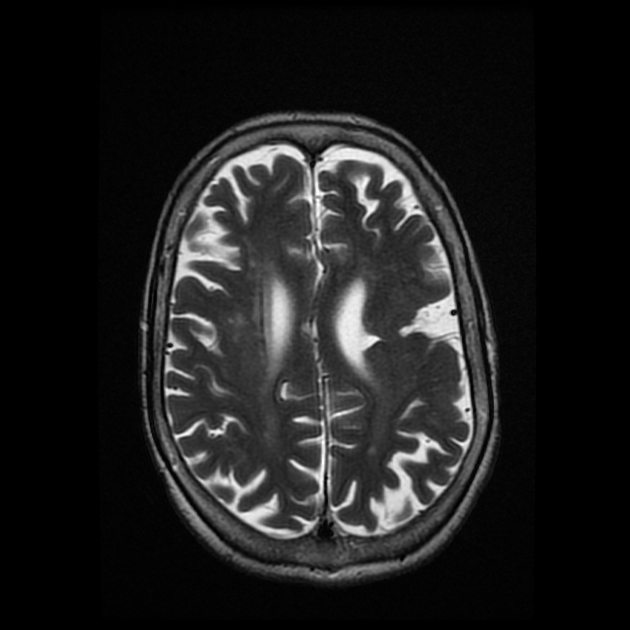 Schizencephaly is a rare cortical malformation that manifests as a grey matter lined cleft extending from the ependyma to the pia mater.

Some authors do not use the term schizencephaly, preferring to group these disorders under the blanket term of porencephaly. For the purpose of this article, and generally speaking, schizencephaly is reserved for clefts lined by grey matter (polymicrogyria) thought to represent a true malformation, whereas porencephaly implies an encephaloclastic event (e.g. ischemia).

Schizencephaly is rare with an estimated incidence of ~1.5:100,000 live births. It is almost always sporadic, although a few familial cases have been described . There is no known gender predilection .

Interestingly, schizencephaly appears to be over-represented in abandoned or adopted children, raising the possibility that in utero insults (e.g. cocaine and other 'street drugs') may be a risk factor .

The abnormality is increasingly detected at the antenatal ultrasound, especially when it is of the open-lip variety.

In general developmental delay, motor disturbance correlates with the degree of anatomical abnormality, especially when clefts are present bilaterality. Seizures are relatively common, although the severity and prevalence of seizures do not appear to be dependent on the anatomical extent of involvement.

Although exact pathogenesis is uncertain, it is thought most likely to be the result of abnormal neuronal migration. Some authors propose an early in utero vascular insult as the cause. Whether this is from an in-utero insult or the expression of genetic factors is unclear. Some familial cases have been reported, in which case, heterozygous germline mutations of the homeobox gene EMX2 are often encountered .

A cleft extends from the ependymal surface of the brain to the pia mater, and the two layers meet in the cleft: the so-called pial-ependymal seam . The grey matter that lines the cleft is abnormal, usually representing polymicrogyria.

Schizencephaly can sometimes be bilateral, and is divided into two morphological types:

Most often the cleft involves the posterior frontal or parietal lobes (70%), and although large clefts can extend to involve the temporal or occipital lobes, isolated involvement of these lobes is uncommon .

It is frequently associated (50-90%) with other cerebral anomalies:

CT can adequately visualize open lip schizencephaly, as well as substantial heterotopic grey matter, but due to an inherent limited ability to distinguish grey from white matter, it is not ideal for fully characterizing congenital abnormalities. The features on CT are the same as on MRI (see below) but merely less well visualized.

MRI is the imaging modality of choice and enables identification of the pial-ependymal cleft as well as visualization of cortical dysplasia and heterotopic grey matter.