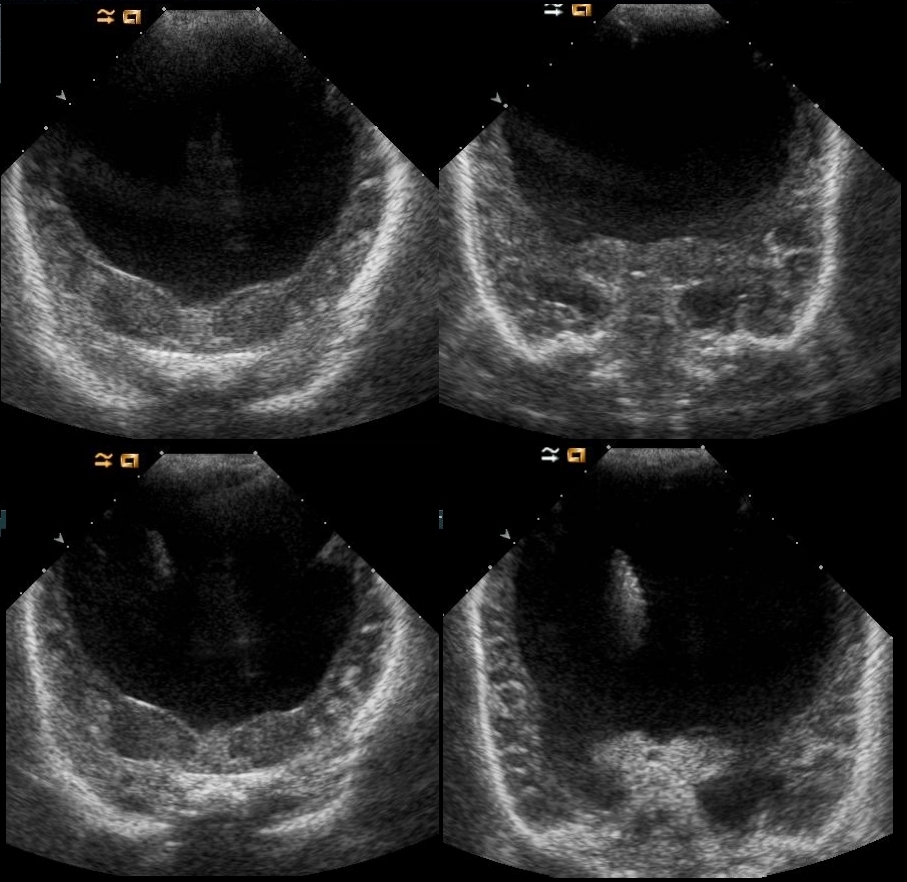 Sonography of
holoprosencephaly in an 8 month old
Wikipedia • CC BY-SA 4.0 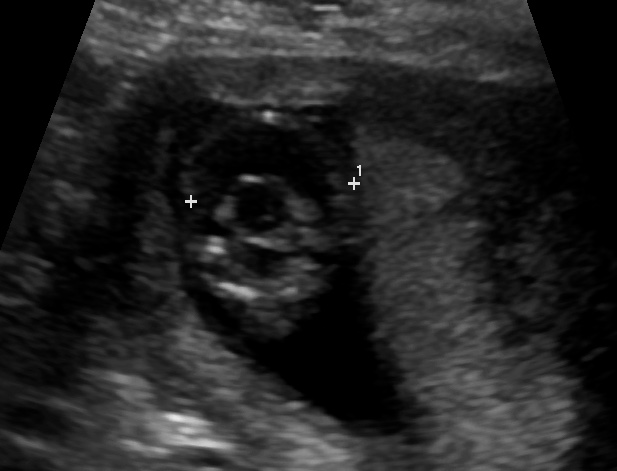 Holoprosencephaly (HPE) is a rare congenital brain malformation resulting from incomplete separation of the two hemispheres.

Classically three subtypes have been recognized, however additional entities are now included in the spectrum of the disease. The three main subtypes, in order of decreasing severity are:

Although rare in absolute terms, holoprosencephaly is the most common brain malformation and is seen in 1 per 10,000-16,000 live births . The early embryonic occurrence may be even higher but may not be detected due to most fetuses aborting in early gestation.

It is usually obvious at birth even if antenatal diagnosis has not been made, due to associated midline facial anomalies including :

Some non-craniofacial anomalies are also associated, such as genital defects, polydactyly, vertebral defects, limb reduction defects, and transposition of the great arteries .

The fundamental problem is a failure of the developing brain to divide into left and right halves (which normally occurring at the end of the 5 week of gestation). This results in variable loss of midline structures of the brain and face as well as fusion of lateral ventricles and the 3 ventricle.

Environmental factors such as maternal diabetes mellitus, alcohol use, and retinoic acid have been implicated in the pathogenesis. As has mutation of a number of genes including Sonic hedgehog and ZIC2 (chromosome 13q32), the latter also implicated in syntelencephaly .

As with most cerebral structural congenital abnormalities, holoprosencephaly is visible on all modalities, but in general is identified on antenatal ultrasound, and best characterized by MRI. On antenatal ultrasound, there may be also evidence of polyhydramnios, a secondary feature due to impaired fetal swallowing.

Ultrasound may also show a snake under the skull sign in some situations.

Below are brief descriptions of the three main types. Note should be made that these are along a spectrum and as such, some patients can be on the border between two types.

In alobar holoprosencephaly, the thalami are fused and there is a single large posteriorly located ventricle. Most commonly associated with facial abnormalities such as cyclopia, ethmocephaly, cebocephaly, and median cleft lip.

For more details see the article on alobar holoprosencephaly.

The basic structure of the cerebral lobes are present but are fused most commonly anteriorly and at the thalami. The olfactory tracts and bulbs are usually not present, and there is agenesis or hypoplasia of the corpus callosum.

For more details see the article on semilobar holoprosencephaly

This is the least affected subtype. Patients demonstrate more subtle areas of midline abnormalities such as fusion of the cingulate gyrus and thalami. The olfactory tracts are absent or hypoplastic. There may be hypoplasia or absence of the corpus callosum.

For more details see the article on lobar holoprosencephaly.

The prognosis is dependent on the type of HPE with almost all alobar and semilobar forms incompatible with extrauterine life. There may be recurrence risk for ~6% with non-chromosomal sporadic HPE.

The differential diagnosis largely depends on the type, and as such please refer to the individual articles above.