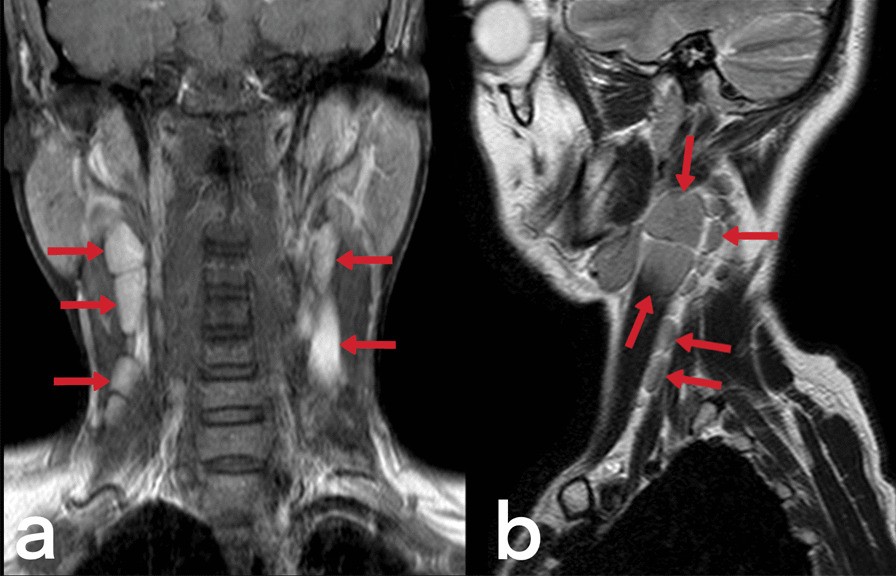 Extrapulmonary
tuberculosıs: an old but resurgent problem. Contrast-enhanced T1 weighted coronal (a) and sagittal T2 weighted (b) MR images of a 39-year-old female demonstrate multiple lymphadenopathies in the bilateral cervical chains. The patient was diagnosed with tuberculous lymphadenitis
insightsimaging.springeropen.com • CC-by-4.0 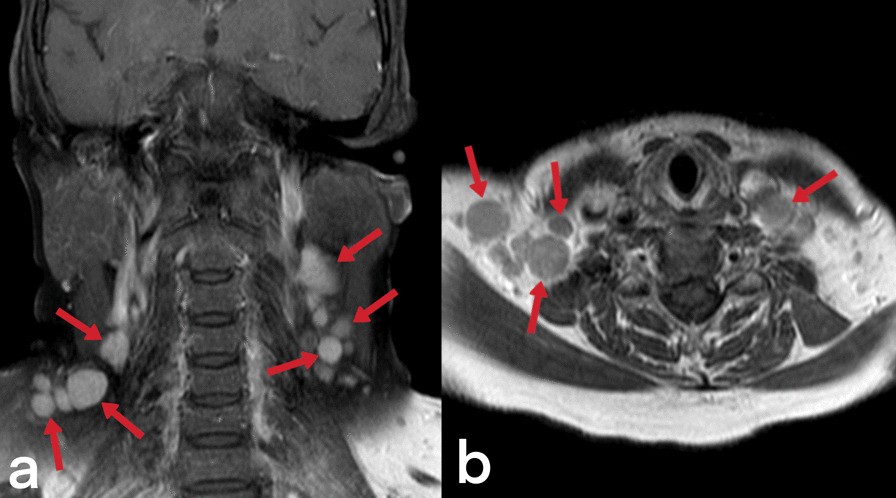 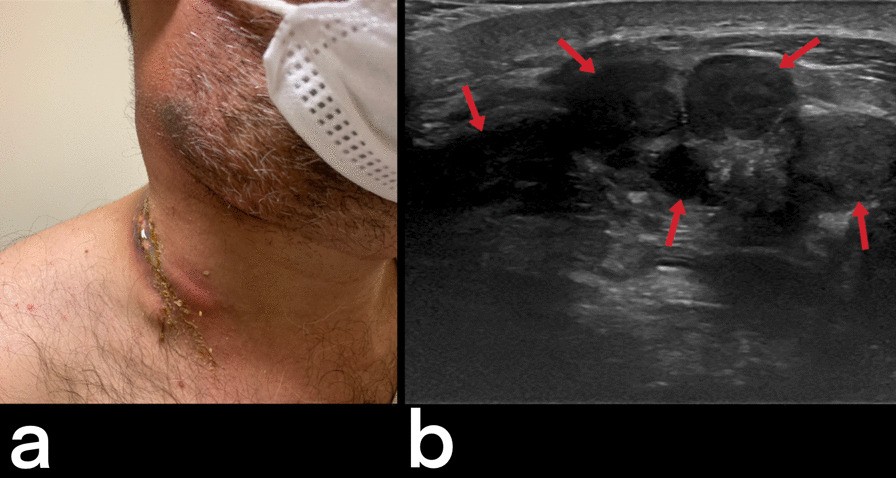 Tuberculous cervical lymphadenitis, also known as scrofula and king's evil, continues to be seen in endemic areas and in the industrialised world particularly among the immunocompromised.

Tuberculous cervical lymphadenitis is the most common manifestation of extrapulmonary tuberculosis and is a very frequent cause of a peripheral lymphadenitis in the developing world. Additionally, in industrialised nations, there is a resurgence among intravenous drug users and the immunocompromised population, especially those due to HIV .

Most frequently children and young adults are affected (11-30 years of age) and there may be a slight female predilection .

The presentation is, usually, with one or more cervical masses. Nodes may be hard or fluctuant, but unlike a suppurative bacterial lymphadenitis, they tend not to be particularly tender and only have limited inflammatory changes in the overlying skin . If undiagnosed or untreated, spontaneous discharge may eventually occur.

Cervical nodes are the most commonly affected nodes in tuberculous lymphadenitis, accounting for approximately 63% of cases, followed by mediastinal (27%) and axillary nodes (8%) .

Within the neck certain lymph node groups are more frequently involved than others, with a predilection for nodes in the posterior triangle (51%) and deep upper cervical (48%). In the majority of cases, lymphadenitis is unilateral .

Affected nodes demonstrate central caseation, characteristic of mycobacterial infections, which appears as a creamy to chalky off-white regions . It is believed that lymphadenitis most likely represents post-primary reactivation of Mycobacterium tuberculosis previously spread haematogeneously during primary infection. Mycobacterium avium intracellulare accounts for 10% of cases which is unlike tuberculosis tends to be unilateral and commonly seen without any chest infection.

Ultrasound is an excellent first-line investigation as it is not only able to assess cervical lymphadenopathy but also enables guided fine needle aspiration cytology. The combination of grey-scale imaging and FNAC as a sensitivity of 92% and specificity 97% in distinguishing benign from malignant nodal disease .

Greyscale features that suggest the diagnosis of tuberculous lymphadenitis above malignancy (the main differential - see below) include:

CT appearances of tuberculous lymphadenitis are variable, depending on the degree of caseation present in the node. Nodes may initially appear merely enlarged, often with attenuation similar to muscle. Eventually, central caseation develops and the nodes become centrally low density and eventually frankly cystic. They are, usually, matted together with only minor surrounding inflammatory changes .

Treatment is with prolonged courses of multiagent antimycobacterials and in some instances (after many months of medical management) surgical excision of residual nodal masses .

Percutaneous drainage should be avoided prior to medical management as it is liable to create fistulae.

It is important to note that during therapy new or existing cervical nodes may enlarge. This should not be mistaken for a failure of medical management, and such enlargement is often transient .

This condition was known by a number of colorful names:

Lymph nodes with low density are typically seen with: